Finally...after an entire June of rain and gloom, the sun came out! Washington's historically fat snowpack hadn't been useful yet since there weren't any weather windows... Nick, Kate, and I planned to head out to Little Tahoma via the Fryingpan Glacier for the first ski of summer. A surprise Sammy Davis appearance was made at 10 PM in the dark at the trailhead! Exciting! We had read that the bridge across Fryingpan Creek was washed out, but figured there'd be a way across the creek further upstream, either on snow, rocks, or downed logs.

We set our alarms for 3:30 AM, in anticipation of a poor refreeze overnight and early warming temperatures.

Snow started earlier than we hoped for on the Wonderland Trail out of the Summerland trailhead, right around 4,000' in patches and then pretty full on by 4,500'. In the morning the travel was still pretty cruiser in trail runners, as the snow was consolidated enough that there wasn't any postholing. We reached the downed bridge and spotted a logjam upstream about 300 yards or so, which looked to be a simple crossing. 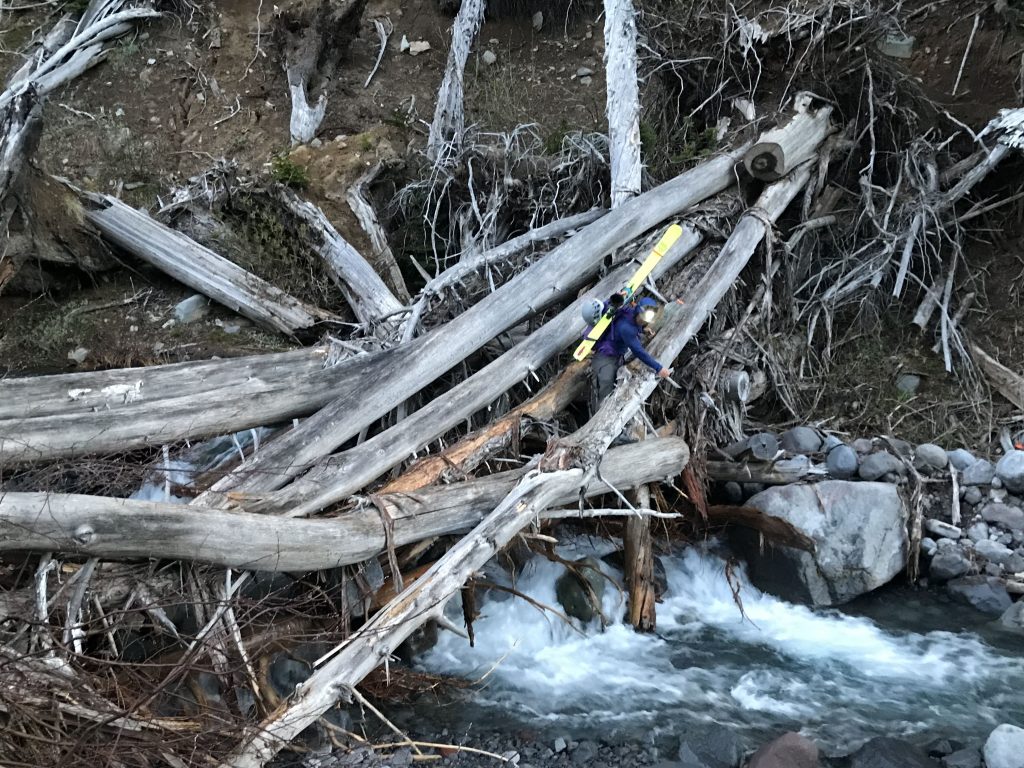 We crossed the creek and transitioned to skins, ditching our shoes on a rock in the snow. The snow surface was already soft down at the 5,500'-6,000' elevation band, even in the pre-dawn hours. 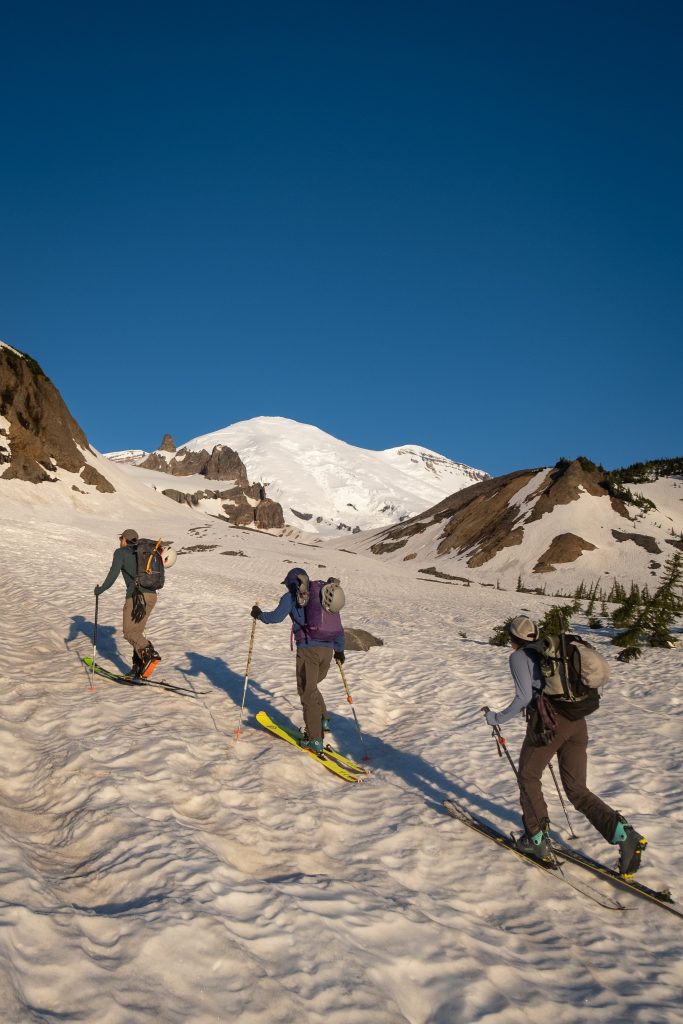 Skinning up to the Fryingpan Glacier was slow and toasty warm. There was minimal wind and the sun was bright overhead. We could see a low marine layer of clouds all around the mountain, but we were above them at 7,000'. Must have been rainy in Seattle! 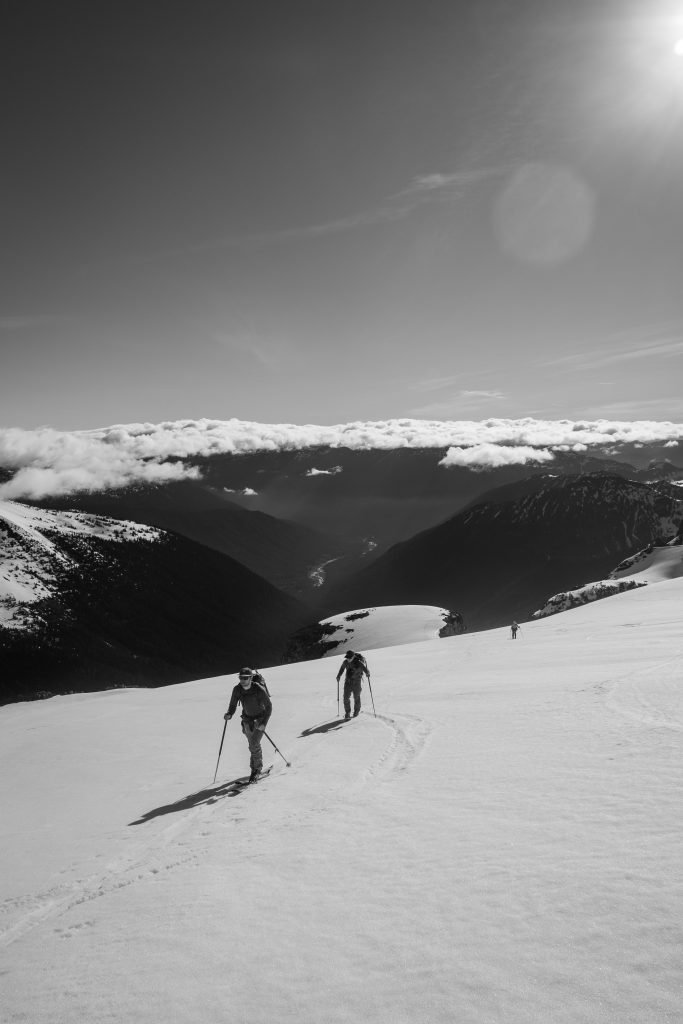 We threw on harnesses before Whitman Crest but didn't see any open crevasses, or really any signs of them whatsoever. The glaciers are still very glued up. We did see TONS of crowns and avalanche activity on Big Tahoma though...a HUGE crown on the Winthrop shoulder that Rainier climbing rangers had reported in the week prior. Sheesh... We encountered one other party the whole day, a pair of climbers that had bivied at the cross-over at the Whitman Crest. They reported firm snow in the morning (so there WAS a refreeze above 8k...we were just late) and easy travel to the summit through what typically are rocks (but now are just snow). Thankfully they had set a bootpack up the final pitches to the summit.

The snow was punchy until we got to about 10k', at which point it was more supportable underfoot. I was able to find dripping water on the rocks below the summit, which I was quite thankful for, since I underpacked water this time. Oops...I admit it. Nick and Sammy made the exposed scramble to the tippy top, while Kate and I basked in the sunlight and chilled. I am happy with my decision :) We started to head down around noon, which was definitely well past corn'o'clock. I think it would have been primetime around 10-10:30 AM. The top 1,500' off the top were pretty damn good skiing! 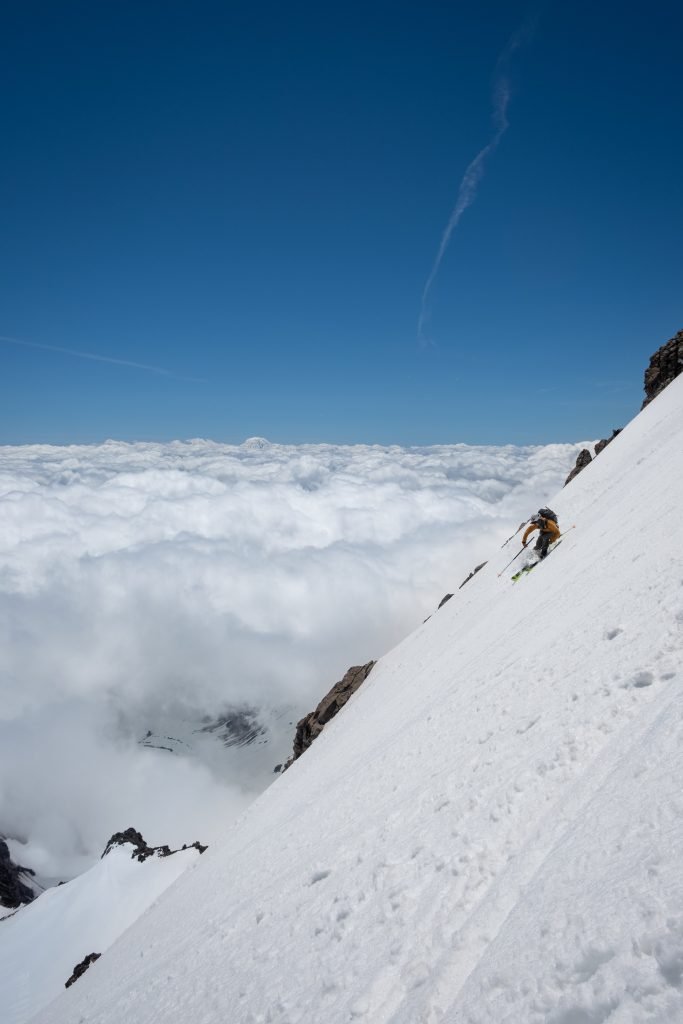 Nick skiing off the top. 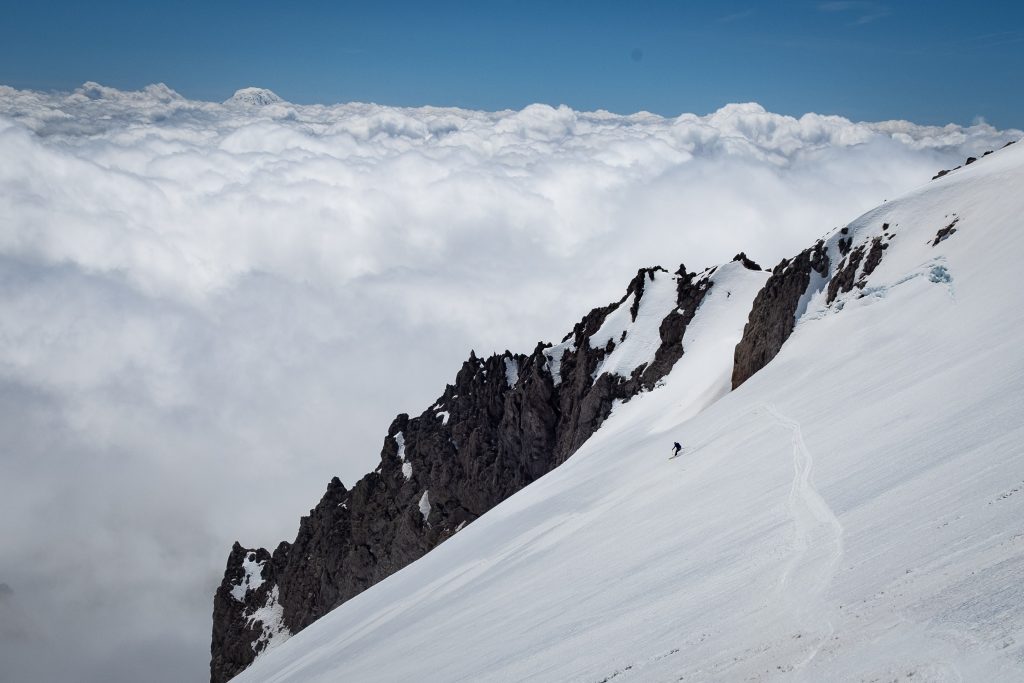 Sammy skiing down, with Pahto (Mt. Adams) in the background above the clouds. Once we reached the Whitman Crest, though, and transitioned onto the Fryingpan Glacier it was deeeeep mank. 4,000' of mank skiing later, we were back at the logjam. I was able to keep my skis on the trail back down to about 4,500', while Nick, Kate, and Sammy opted to put on their trail runners and walk down. I didn't save any time, but got some more pollen infused, garbage tree skiing! All in all, a great day in the mountains...probably underestimated this one a bit in terms of length and physicality. We weren't going for any FKTs, but did this in 11.5 hours. I think 8-9 hours round trip is probably a more 'typical' time for me on this, but we weren't in any hurry. It's a SLOG...lots of low angle mileage to cover.

A GREAT trip report with the photos plus the conditions you encountered for a BIG day.😃

Yes Zap - Sam is prolofic, a good writer and photographer, and is full of the kinds of Trip Reports everybody likes to see on this site…But you didn’t summit?😉

A bit of an update on the crossing of Frying Pan Creek. The creek has changed its normal channel near the bridge. The bulk of the flow no longer goes under the bridge and instead, goes between the bridge and end of the trail.   It's not really necessary to thrash through the forest and brush to go upstream to go across the log crossing in the photo in the report. Bring some crocs or let your trail runners get wet and it's possible to get to get from the trail to the bridge with a combination of rock hopping and some ankle-lower shin wading depending on the time of day and flow.

Snow bridges still cover the small tributary creek further up towards Summerland so it's possible to continuously skin once you get across Frying Pan Creek. The basin beyond that below Meany Crest is a mess of old wet slide debris, sun cups and runnels but once through there, the travel up to the Frying Pan Glacier is pretty straightforward with a combination of skinning and booting.

The Frying Pan Glacier down from Whitman Crest was in great shape today. With a good overnight freeze last night and today's temps and cool breeze, there was good corn and little in the way of mank that was noted in the above report with our 1PM descent, even on the steep drop at the start of the drop down to Summerland. That may not be the case with the very warm forecasted temperatures for this weekend. There are no crevasses open on the Frying Pan nor are the bergshrunds opening below Whitman Crest yet. 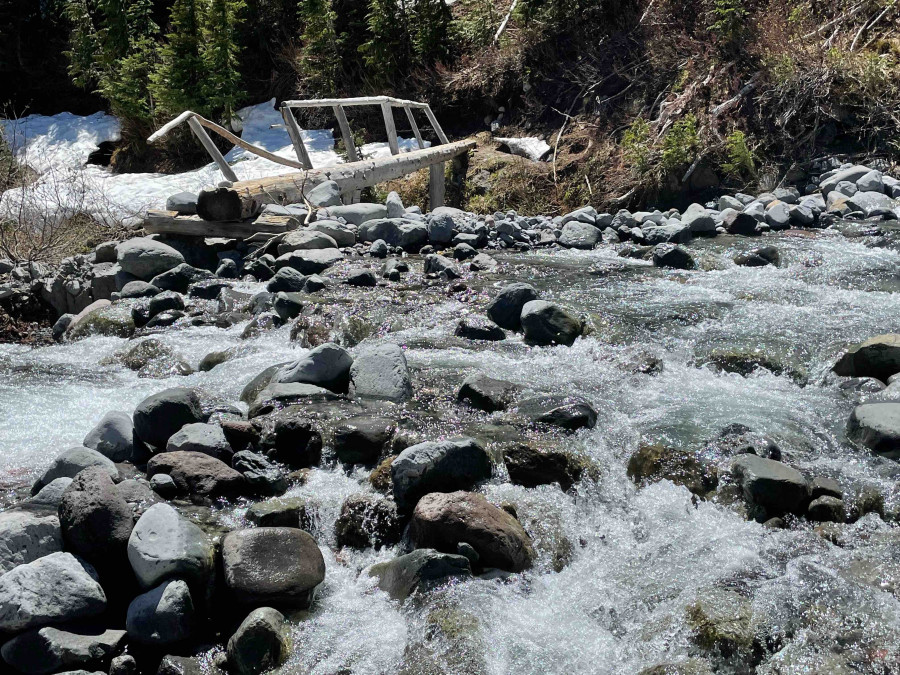