We hiked up to Lake Angeles near Heart O' the Hills in Olympic National Park and set up a basecamp for Memorial Day weekend 2021 with the goal of exploring for some turns up higher. (ONP permits are super easy right now since you can just book them online, see campsite inventory in real time, and never have to stop in at a ranger station to actually pick up the permit.) After Saturday afternoon's lounging around our basecamp in the sun, on Sunday, May 30, 2021, we girded our loins and began hiking up towards Klahhane Ridge with our ski gear, plus ice axes and boot crampons since the park rangers had recommended that equipment, saying that the trail was snow-covered. Turns out that the trail was indeed VERY snow-covered and hard to find. Only about half a mile of dirt hiking! The GPS wobble defeated Gaia and our paper map so we just navigated along the far side (not the Lake Angeles side) of the ridgeline, working hard to avoid downed trees, rotten snow, etc.

Where was the trail!?!?  Ughhhh... bushwhacking... well, at least we knew where we wanted to head to... and there were some obvious points where we got cliffed out and had re-route.

Anyway... after much bushwhacking... we ended up literally never skinning and simply hiking with boot crampons and ice axes. Ice axes and crampons were definitely necessary given how steep some of the slopes were and how hard the snow was above 4500 feet!  In the first half of our quest for turns we couldn't locate the point where the summer trail crosses over the ridgeline so we just found a spot to cross over. This made for a spicy little rock scramble in ski boots with skis on packs!

Once we were back on the Lake Angeles-facing side of the rocky ridge crest we were able to beeline up to the highest ground south of Lake Angeles and enjoy magnificent views of the Pacific Ocean, Canada, Mt. Baker and of course Port Angeles to the north, or the panorama of the Olympics to the south. The road up to Hurricane Ridge was a tiny ribbon far below...   On this high ground -- not the ridgeline that you can actually see from Lake Angeles, but the one higher up which is set further back-- we located the trail that runs towards Klahhane Ridge and Victor Pass but given how much time our bushwhacking had consumed, we opted to not attempt to head that way... it was also looking pretty rugged with more snow.

We were able to see Victor Pass intermittently during our bushwhack and from our highest point and we could see ski tracks plus the skin track back up. Looked nice and skiable! Some other time we'll have to get there...

So, after spending some time enjoying the phenomenal views and waving hello to Canada we were able to quit carrying the skis and transition to downhill mode. Nice creamy snow with good coverage and a longish run down to the rocky ridgeline on skier's left that we had crossed over on our way up. We scrambled back over, ending up again on the non-Lake Angeles side, and began the process of bushwhacking and attempting to stay fairly close to the purported summer trail. On the return journey we found a melted-out stretch of this trail and realized that the trail really hugs this rocky ridge closer than we had thought and was almost entirely buried by very steep snow banks extending down from the ridge. In fact we had to front point and shuffle sideways along it for stretches on our return journey since the snow extended across the whole trail and then the hillside sloped steeply down.

Eventually we got back to that half-mile of dirt trail... descended quickly back to basecamp and chowed down on some pasta then watched the sunset on the lake. Time well spent in the mountains! 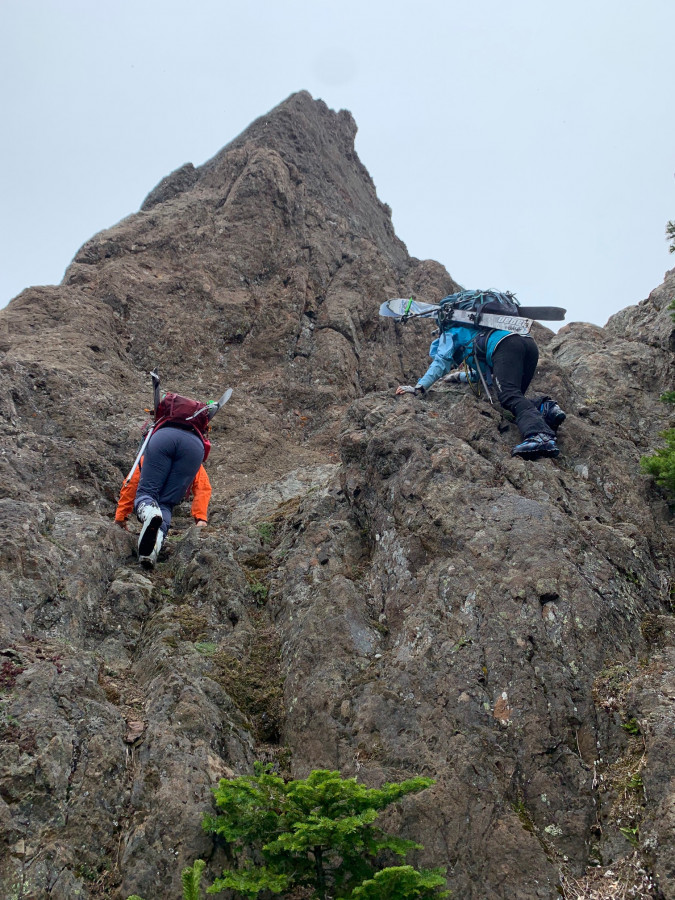 One of the rock scrambles... 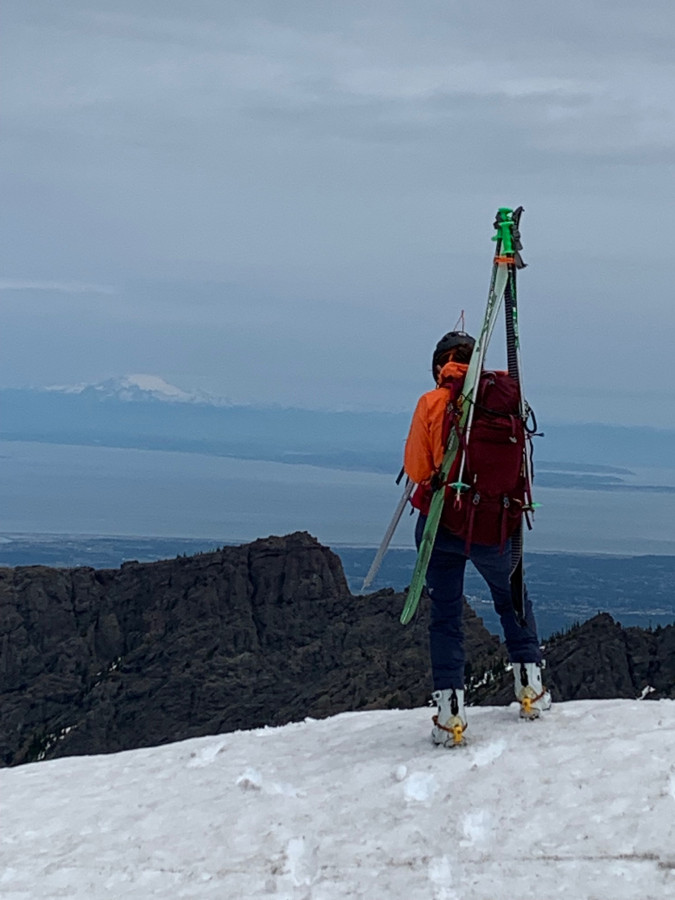 O Canada... just before our descent 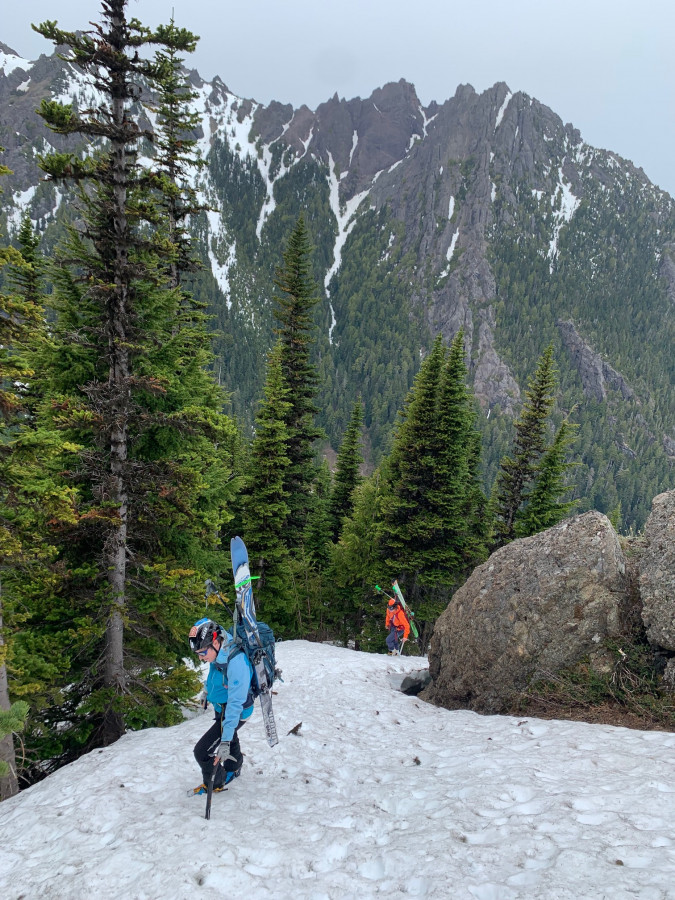 Some of the less annoying bushwhacking! 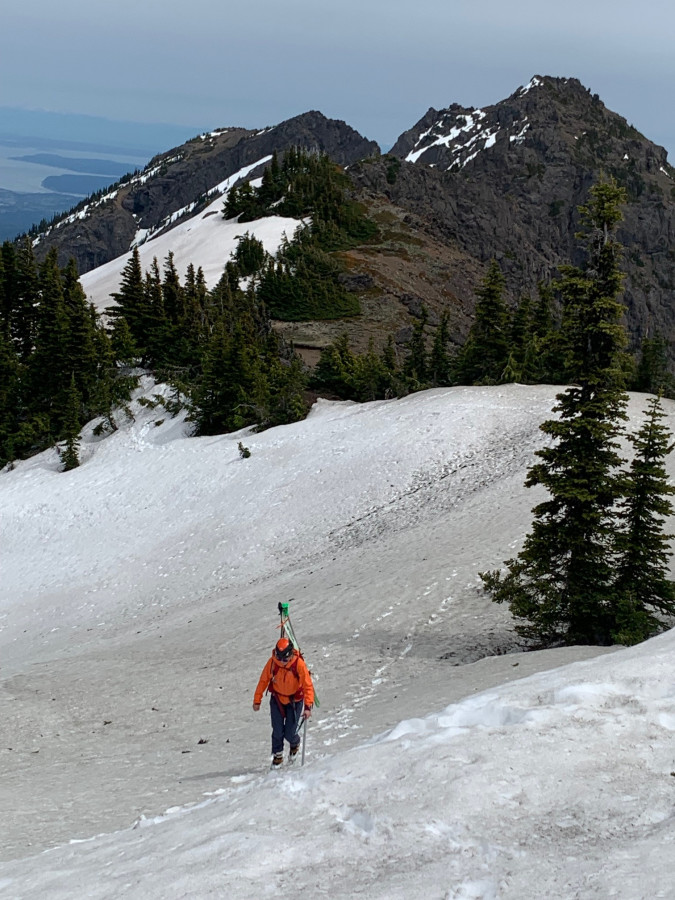 Almost to where we began our descent above Lake Angeles 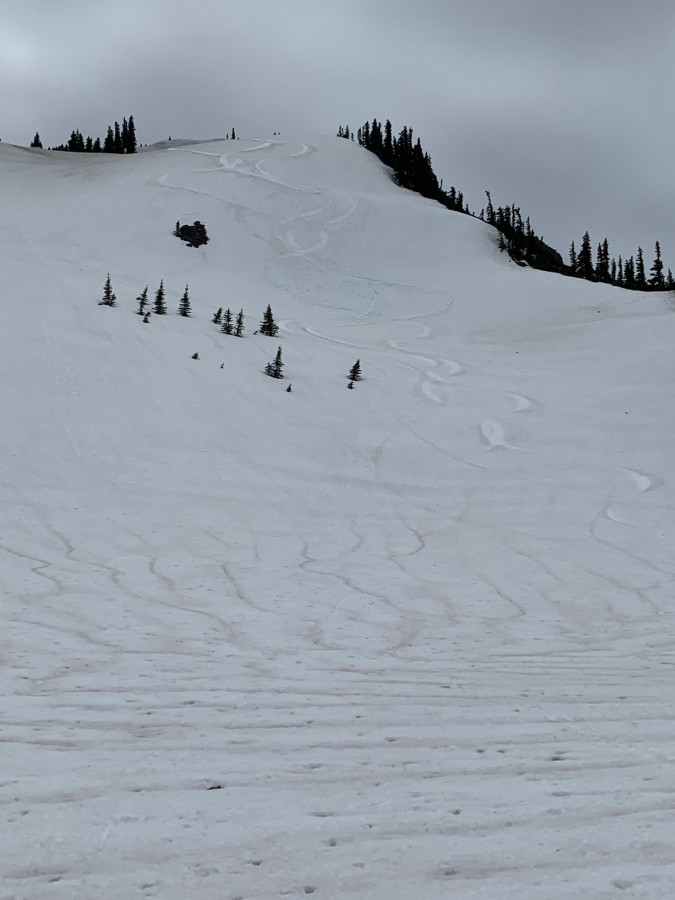 Way to get out there and find it!