The Cumshot Couloir is an amazing line dropping north from the western-most saddle of the Triad, a massif with three peaks (once named the 'Three Dicks'). Getting there is a long slog: you can either go in from Hidden Lake and do a spicy ridge traverse, or use the Eldorado approach and traverse the Eldorado Glacier. We opted to go up from Eldorado as it would be more straightforward, albeit much longer. The line itself is steep and deep: around 50 degrees at the top and sustainted 45 degrees for 2,500' to the bottom. It is an amazing line that drops you into Marble Creek Cirque, which is an amazing position. We were all stoked to give it a go, but went in with low expectations, knowing a line like this would need more than a few things to go "right" for us.

We slept the night before at the Eldorado Trailhead and set our alarms for 2:30 AM. The forecast had morning clouds parting around 10 AM to fully clear skies, so we wanted to get an early start to be ahead of the clock for warming. We knew the line had overhead cornices and didn't want to be playing with that objective hazard too late in the day. Walking the Eldorado Trail in the dark was zombie-like but went quickly. We reached the boulderfield in ~1 hour, 20 minutes (at 4:20 AM…hell yeah). The trail was completely dry but as soon as we got to the boulderfield it was full snow…a perfect transition! The snow was re-frozen so we actually continued on in our trail runners another 1,000'-1,500' on the bootpack that people had put in the day before (thanks Michael!). We passed a few snowshoers and transitioned at the bench around 5,500' where it flattens out before the cross-over to Roush Creek. We stashed our shoes on a tree and headed for the ridgeline.

A quick transition and we were on the Eldorado Glacier in the early morning light. We hung a high ski traverse as far as we could towards the Triad. We were able to contour on the 6,000'-5,800' elevation band pretty far before we had to transition. The morning snow was a firm suncrust that was not supportable to boot penetration. Skinning was tough at times and ski crampons certainly would have been VERY helpful. There are few times through the year that I wish I used ski crampons, so I normally don't bring them. But MAN I wish I had them…There were a few spots that I didn't feel confident skinning so I wallowed through knee deep breakabale crust…YUCK. 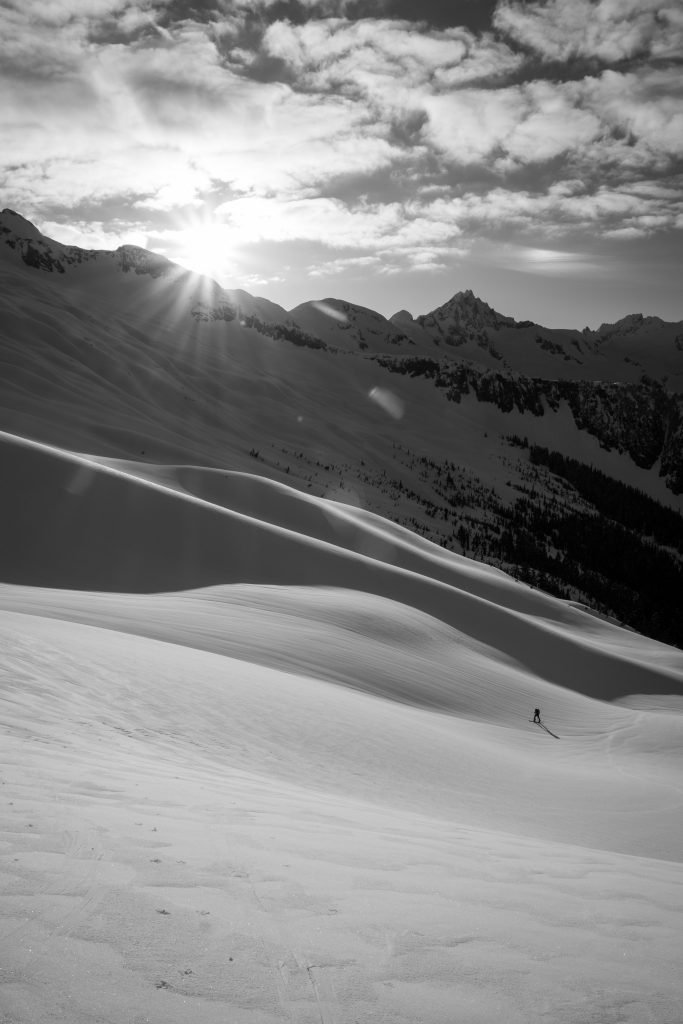 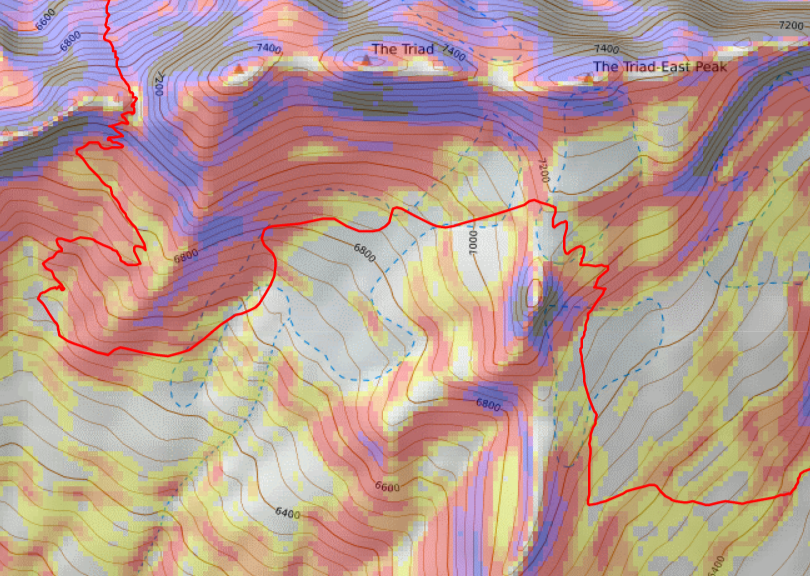 Getting over to the base of the line. Within 5 hours 30 minutes, we were at the top of our line after 6,500' of climbing. A long way to get to a line but man was it worth it! Looking down at the line, it was STEEP! We could see some wind texture on the snow surface in the top of the line, so we opted to set a ski belay. Anthony, being the thicc boy of the group, volunteered to be the "bait". Nick put him on belay as I took pictures. 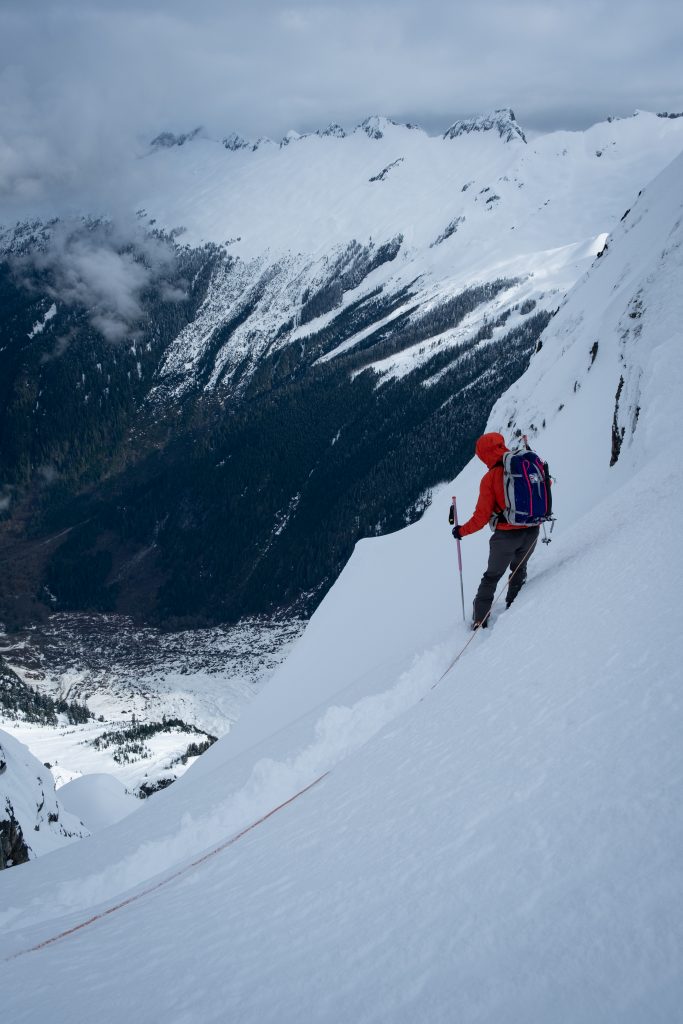 Anton on the rope.

After two jump turns, Anthony turned back to us with a smile. "I like it!" Hell yeah… 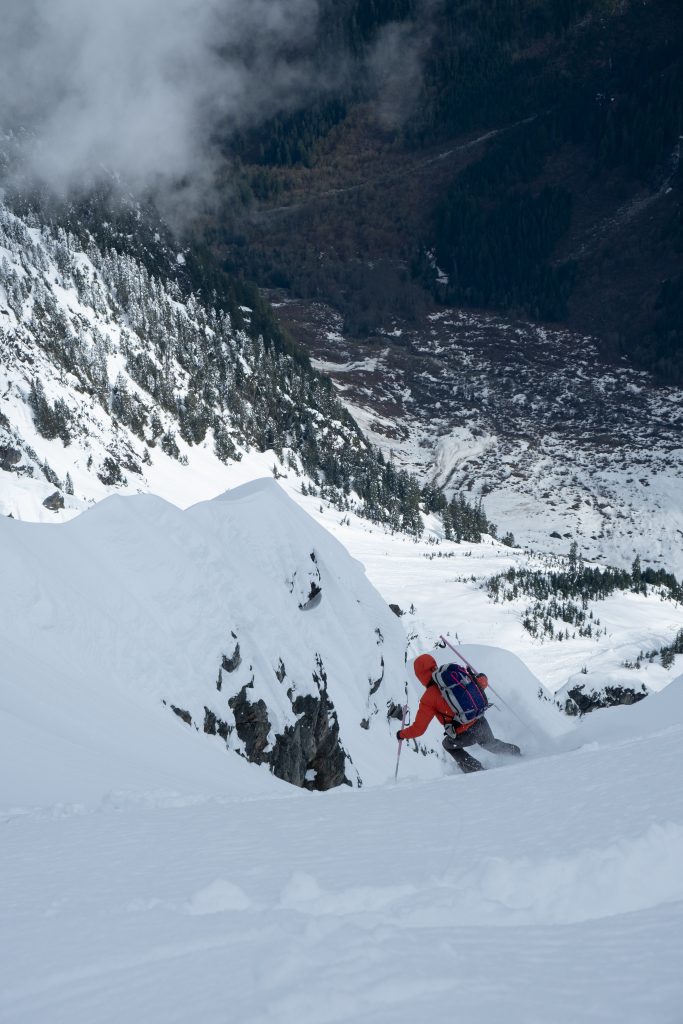 The line sluffed a bit but was manageable…it just kept us from making any more aggressive link-up of turns. Anthony went first, down to a small bench at the base of the top pitch before the couloir turned to skiers' left. I followed after him…then Nick. 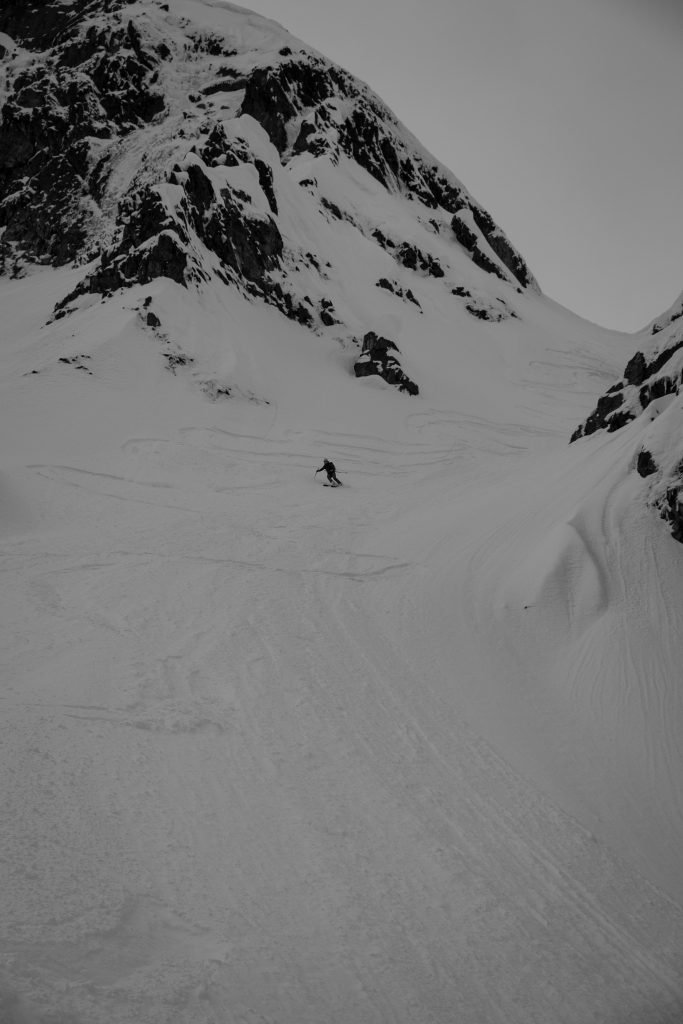 Nick on the upper pitch of the couloir. WOOO! The line was amazing and in great snow! We were all smiles. I took the next turn, around the corner towards the dogleg skiers' right. I mistakenly took us too far skiers' right and had to boot up 100'-200' to return back to the couloir…oh well :( 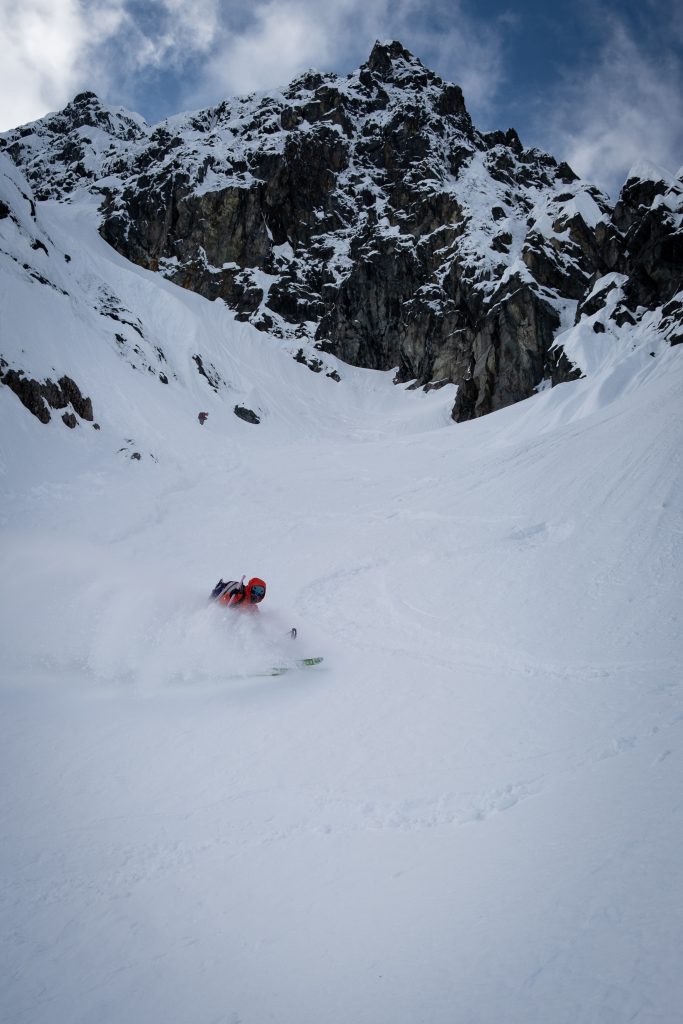 Anton getting pitted in the coulie.

The couloir was amazing until around 5,000', where it turned to runneled out, avy debris that was both re-frozen and chunky. YUCK! It was pretty disgusting skiing and we each groaned as our feet began to hurt from being thrashed about. 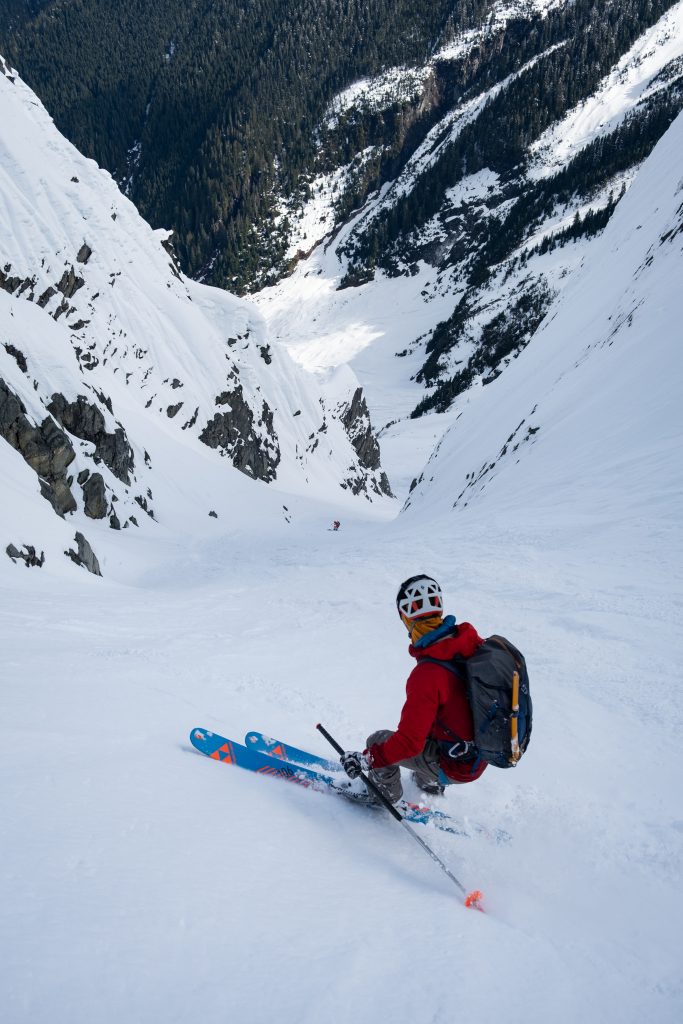 Nick staring down the bottom part of the couloir. We traversed out of the disgustingness to skiers' right to reach the "Marble Glacier" (I don't know if this is actually what it's called), where we would begin our climb out of the Marble Cirque. We would climb to a saddle to the east of the Triad, where we would have to make a short rappel to get back to the Eldorado Glacier. The snow turned from crust to pow on the Marble Glacier and I REALLY wanted to do a hot lap of the north-facing powder. But upon reaching the col where we'd have to rappel, we realized we'd have to spend some time finding a good place to rappel, so the hot lap was foregone. Sad. Another time. We found a rock to sling and made a 30 meter rappel with 2x30 meter Petzl RAD lines, using 20ft of cord for the anchor. Our rap station was far on the eastern side of the col, where the snow comes up high and avoids more rocks. There was one section further to the west that "MIGHT" have been skiable, but after rappeling down we saw it was blue ice. YIKES! 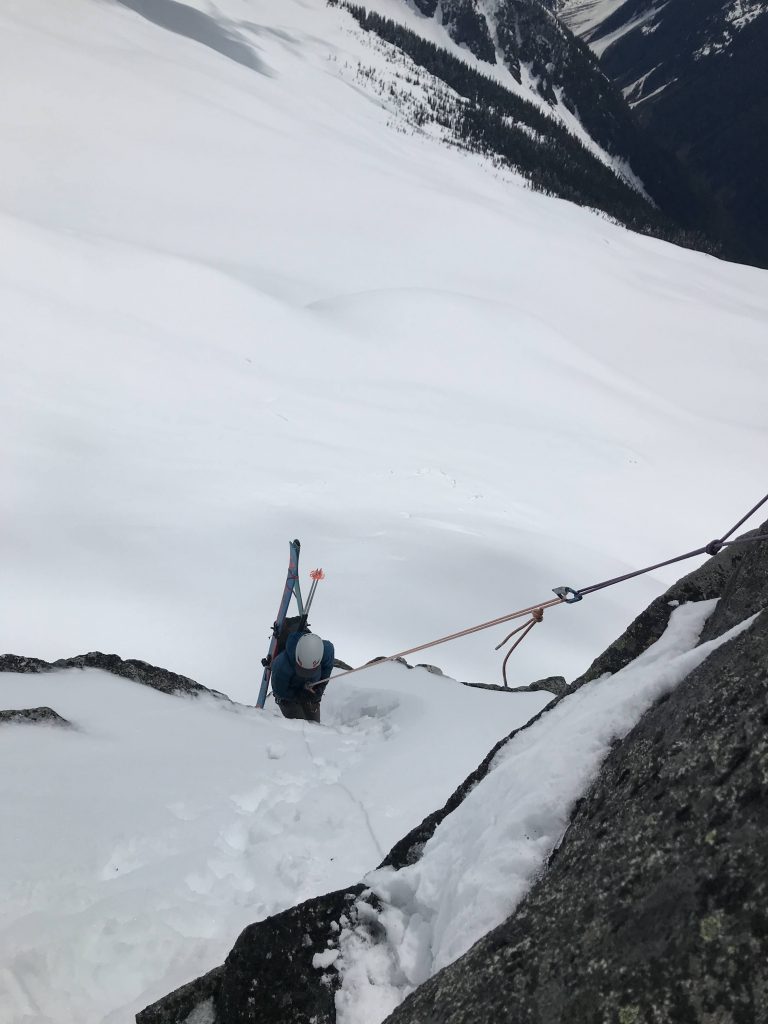 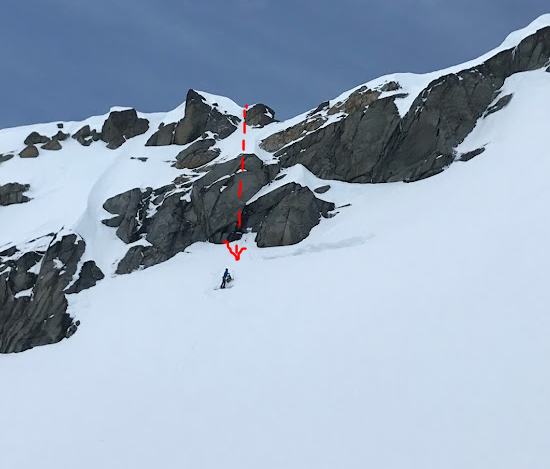 Looking back at our rappel. We debated heading up the Eldorado Glacier to either hit Eldorado Peak or do a lap on the Eldorado Glacier, but opted not to due to the time of day and warming that the southern slopes were experiencing. We skied south-southeast back towards the Eldorado Trail on the Eldorado Glacier and the snow wasn't bad! It wasn't corn but it wasn't total mank. I wanted to ski more but it was time to head in. We were able to ski most of the boulderfield, which by 1 PM was total mank. We got back to the car by 3:30 PM for an 12.5 hour day round trip. Overall, it went VERY smoothly and we didn't have too many shenanigans (aside from the short boot back up which was mu fault).