A powder dump in late March brought 12 inches of snow to Snoqualmie...as well as 90+ mph winds!?! Camp Muir recorded a record 143 mph sustained wind...insane. So the operating question was: where would the snow be skiable? It can be hard to know what winds that high will do to certain aspects, other than mess them up. Michael, Nick, and I were up for some exploring. We gave north and eastern aspects the greatest chance of being protected from the western storm front, which had come through on Sunday. On Tuesday we decided to head out to the Kendall Adventure Zone, with low expectations and high hopes.

The Kendall Adventure Zone is LOADED with steep couloirs and awesome lines...one stacked next to another. It's a gem of an area, tucked just far enough back into the Snoqualmie backcountry to remain relatively quiet...as compared to the Slot and other Snoqualmie Mountain couloirs. Nick had skied Main Vein and Silver Twin before, two of the more popular lines in the area, and wanted to venture out into the Central and East zones of the Adventure Zone. Michael and I hadn't been to the zone before, so to us it made no real difference. In assessing the conditions, our biggest concern and unknown were the cornices and overhead hazard of the couloirs; would winds that high form cornices, or simply blast everything to smithereens? We decided to bring a 30m rope to enable us to ski on belay for the initial drop(s). Additionally, one of the lines, Kingpin, is known to require a 30m rappel; would a 30m rope be enough?!?! Only one way to find out...

We opted to approach via the Kendall Lakes gulch, taking a well graded snowshoe trail up towards the Lower and Upper Kendall Lakes. From there, we skinned and then booted up to the entrance to the C.T. Chutes, our first line for the day. The clouds remained overcast in the morning, keeping the solar aspect of the southern approach at bay, and the winds were calm to nonexistent; overall, we felt the conditions were setting up REALLY well. We noticed A LOT of graupel snow, INCHES of it. The snow was supportive though and consistent down the previous pre-storm layer, not upside down or discontinuous. On certain aspects a slight punch crust was prevalent, but not cohering or propagating on quick hand shear tests.

At the top of C.T. Chutes we set up a ski belay and Michael served as "shark bait"; there was a very small cornice that we were able to dig out with a ski as a shovel. 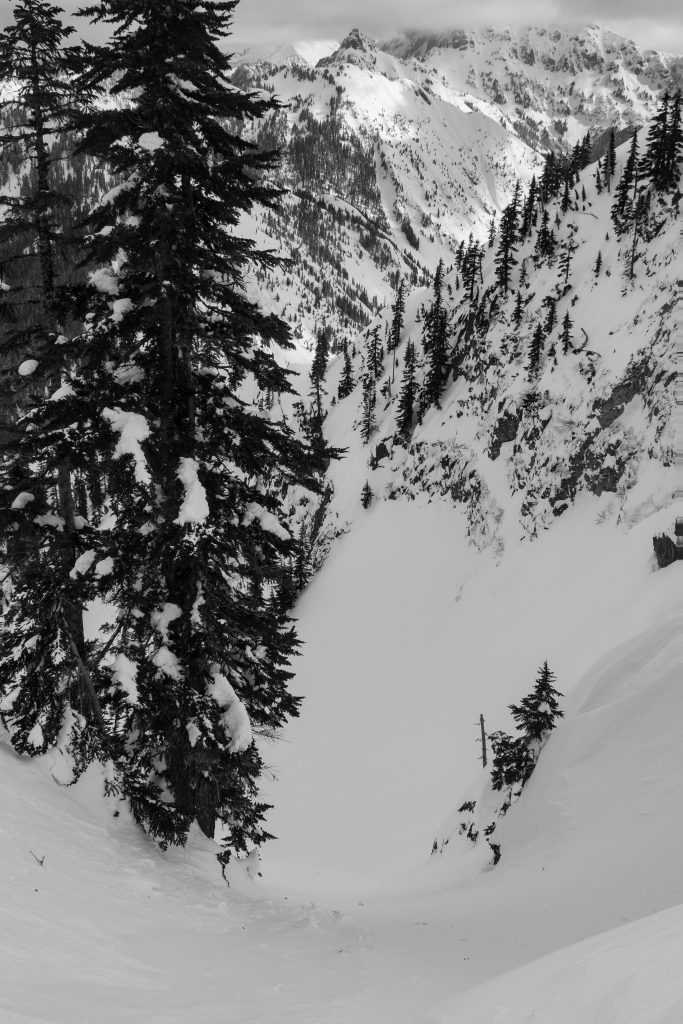 On belay, Michael eased over the edge and weighted the slope...nothing. He took another turn on belay and again...nothing. The snow was supportive, well-bonded, and did not appear to have major wind affect or texturing. 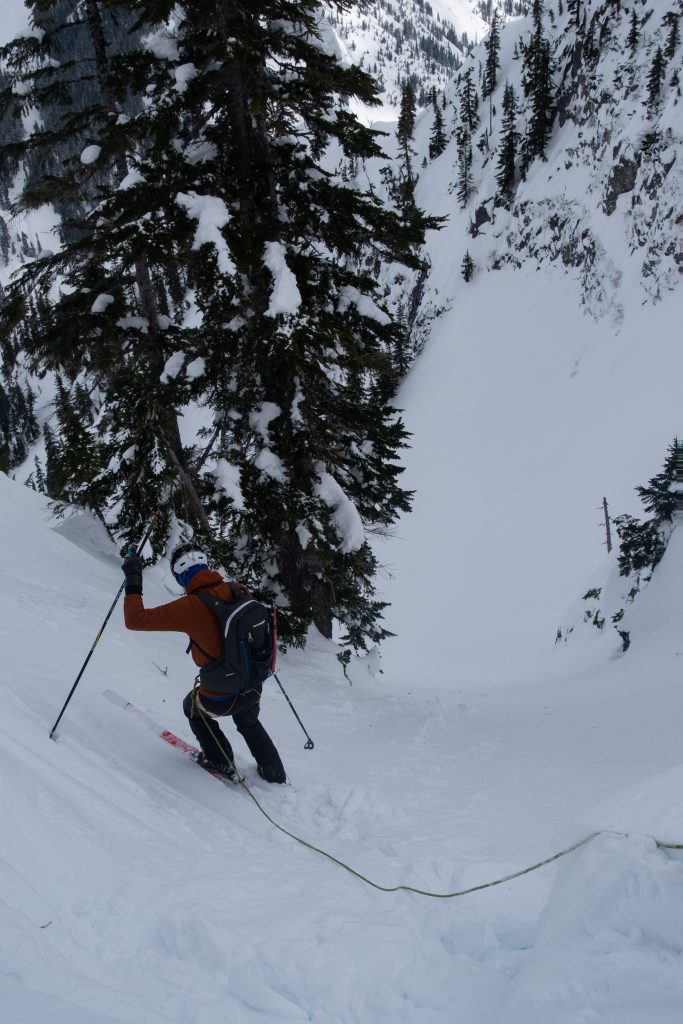 Michael took off the rope and I followed, then Nick. The snow near the ridge was a bit grabby, but just a few feet down turned into nice powder...AWESOME! We took the initial run slow, easy, and one-by-one, being very cognizant of the possibility of slabs. 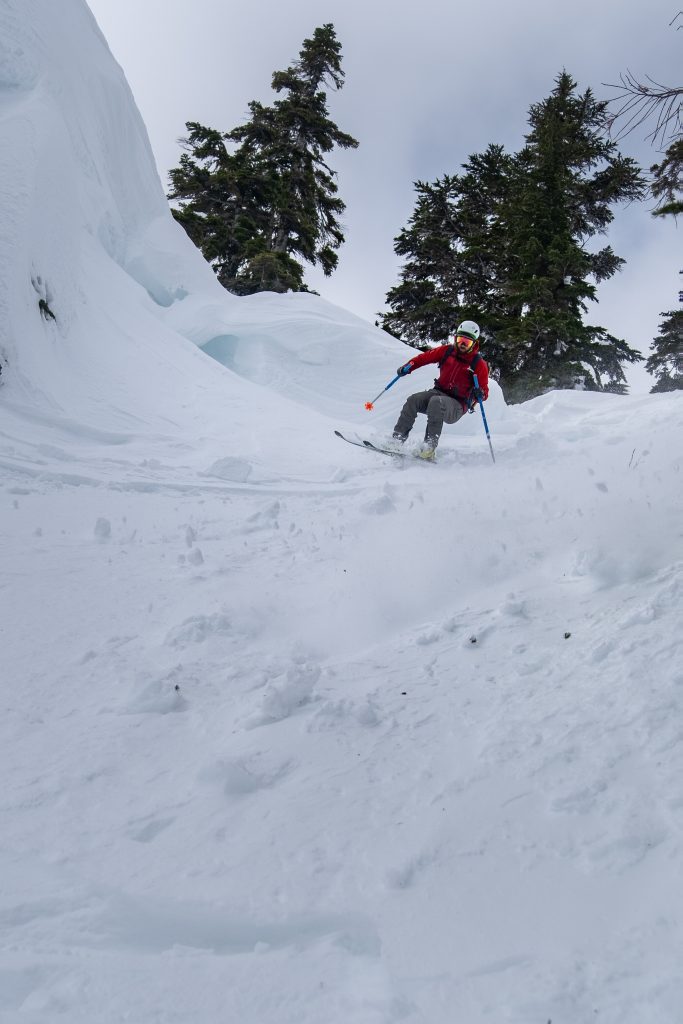 Nick taking a jump turn at the top of the C.T. Chutes.

The C.T. Chutes quickly open up into an apron; it is not a very narrow or difficult line. We skied down the apron to the point at which we could see both Kingpin and Not So Super Steep, the next lines in our sights. 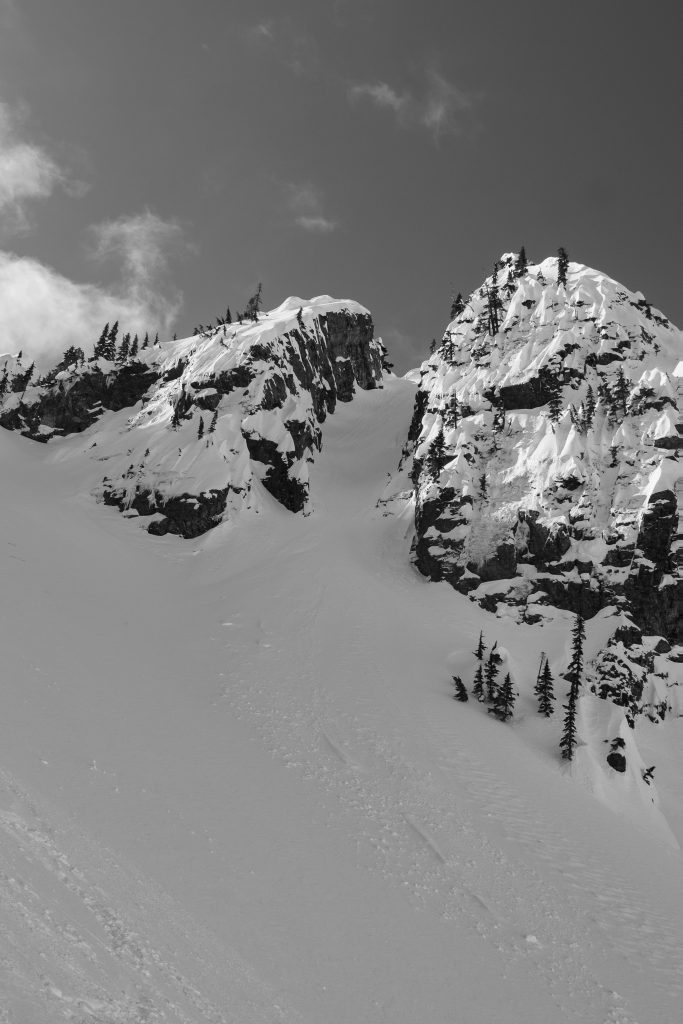 Looking up at Not So Super Steep.

We opted to head up the apron a bit and boot up Kingpin first. We had read that it was possible to skin up C.T. Chutes and then traverse along the ridge to enter Kingpin from the top, but because (A) winds had deposited some cornices and (B) we had a 30m rope for an apparent 30m rappel, we opted to boot up it instead. Nick led the way like a champ, wallowing through groppel and loose snow. Surprisingly, or maybe not so given how much snow we've had this season, Kingpin was filled in near the top and didn't require any rappel at all. 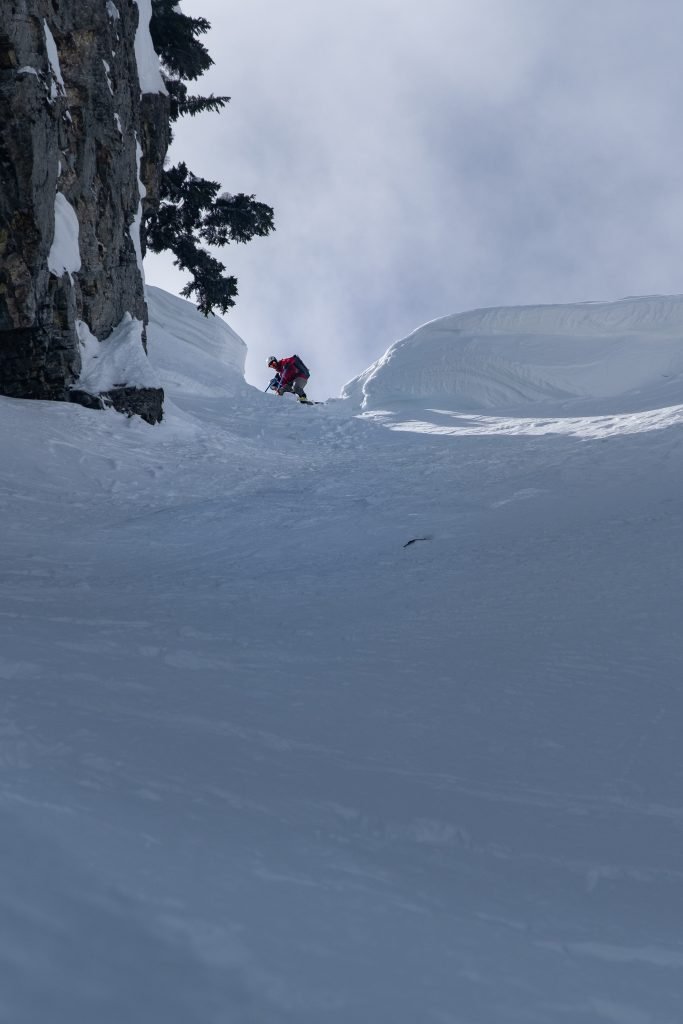 Nick making his way down the top of the Kingpin line.

We cut out a small portion of the cornice but other than that it was very manageable. The entrance to Kingpin involved some steep jump turns on some variable snow, but very quickly turned to better, more protected snow and wider hop turns. It tops out around 45-50 degrees near the top and starts to mellow closer to 40 near the bottom. Overall, its a lovely line. 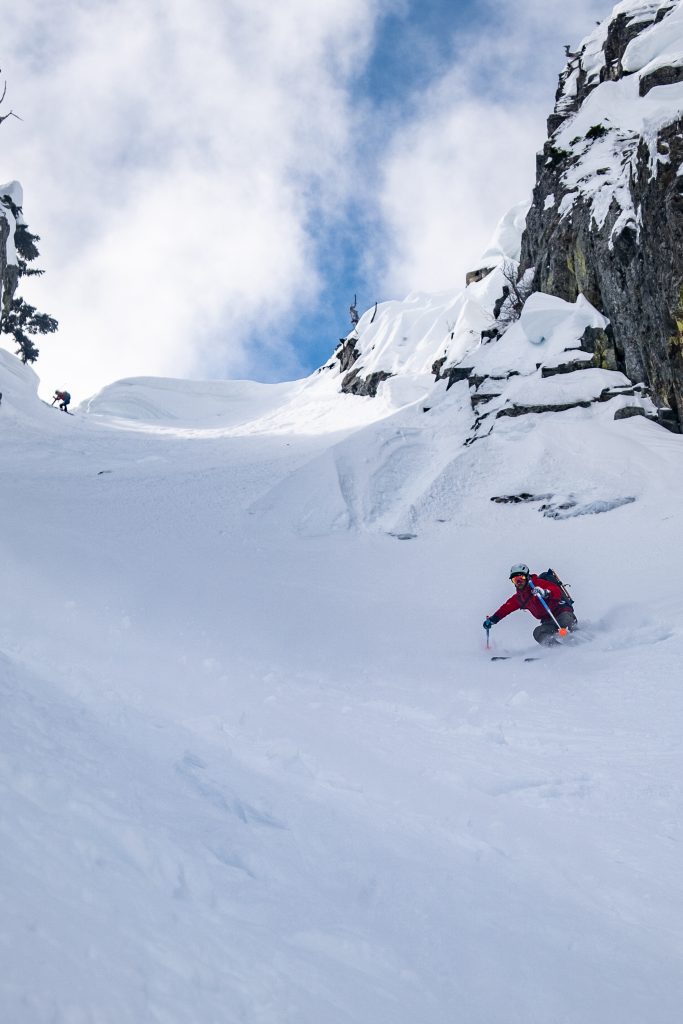 Nick getting into his groove.

We skied down through the chute onto the apron and stopped around 250 or so down the apron, ready to loop back up for Not So Super Steep, the line just to skier's left. As the name states, the line looks steeper than it really is. Once again, Nick took lead on setting the booter (thanks Nick) after I wallowed through groppel in agony. Once again, near the top we chopped off some of the small cornice that was present, and went one-by-one. This time Michael led the way... 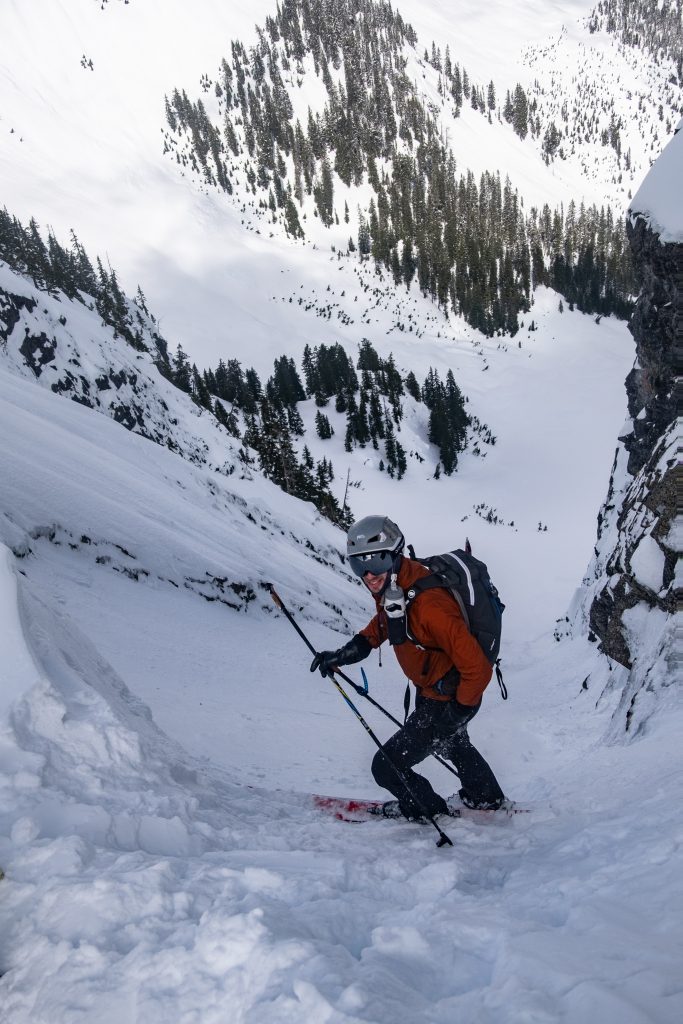 Michael is all smiles. 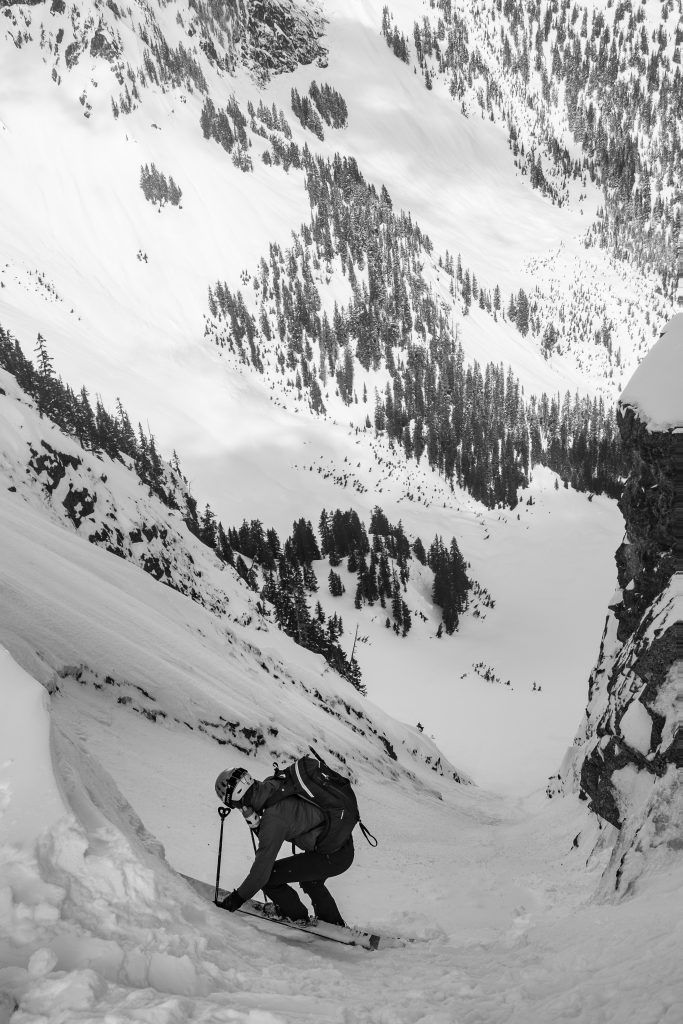 Michael stepping down into the chute.

Honestly, entering the chute was the hardest part of the whole line...the cornice was a bit icy on the sides, so stepping down one ski at a time and trying not to bend or flex the ski too much took careful attention. Having Michael and Nick go ahead allowed me to use their track :) 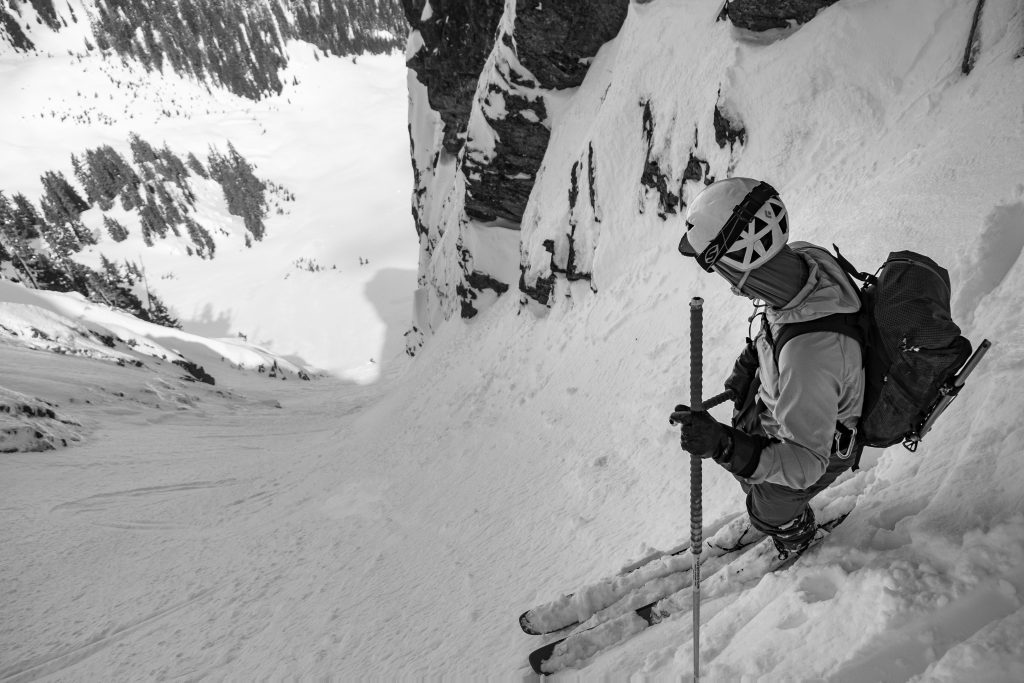 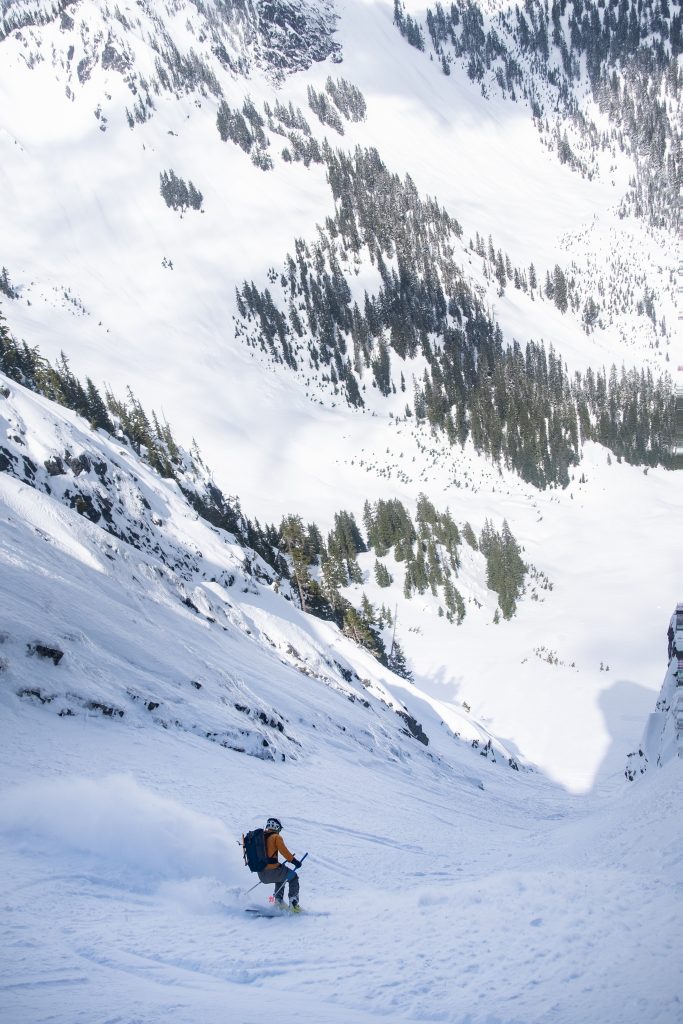 The chute is fairly wide and allows for a nice rhythm, where you can pick up some good speed. We had a blast. Once again, we skinned up C.T. Chutes, this time, though, to move over to the East zone of the Kendall Adventure Zone. We had more couloirs left in us...and we wanted to explore the Icy Gash, a line on the East side that we read about and were very intrigued by. To make it over there we skinned and booted along the south side of the ridge, avoiding the cornice and overhead hazard of the wind drifts that had formed. Before long, we skied over to Silver Lining, a wide but fun chute on the East side of the zone. 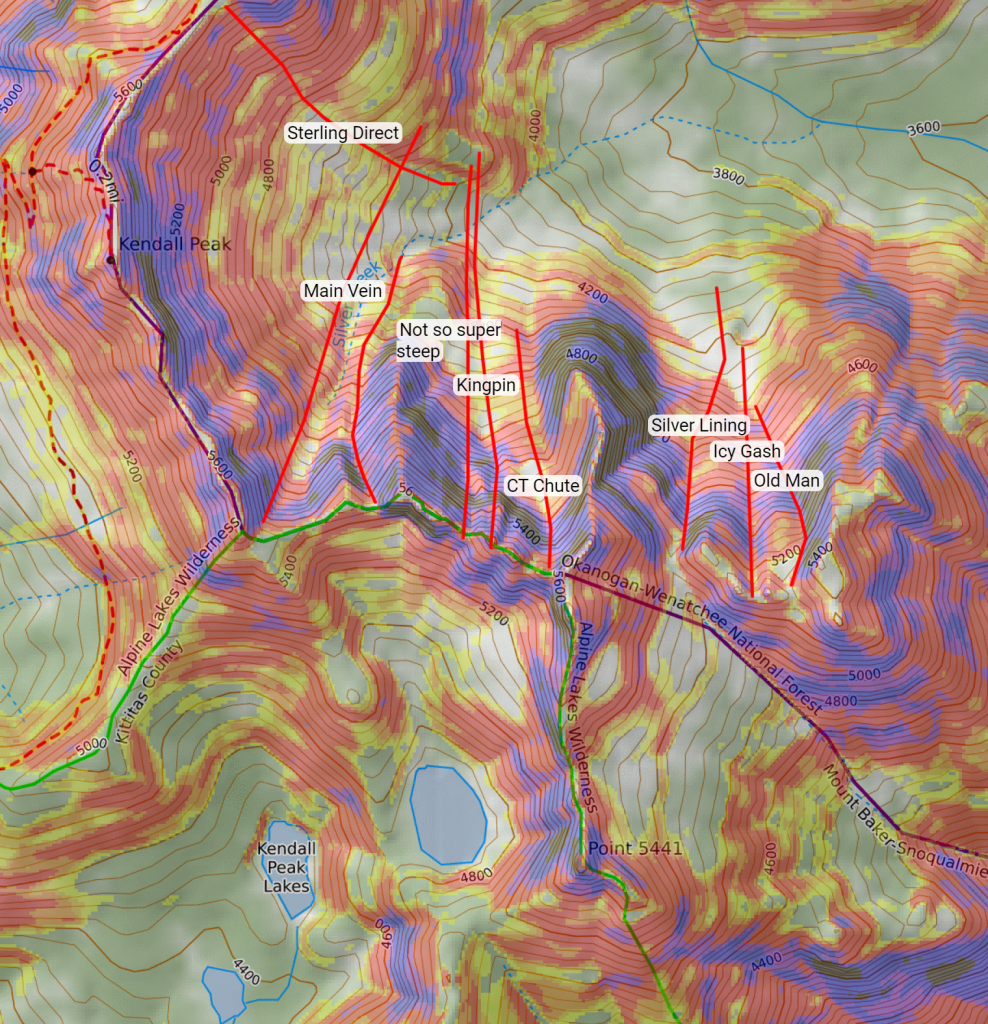 The lines of the Kendall Adventure Zone are just stacked up one-next-to-another...it's pretty incredible. C.T. Chutes makes a great entry and exit, as its the widest and lowest angle in the central zone. Silver Lining was fun...but at the bottom when we saw the Icy Gash, we knew we needed to get back up to ski it. Just look at that ice formation! 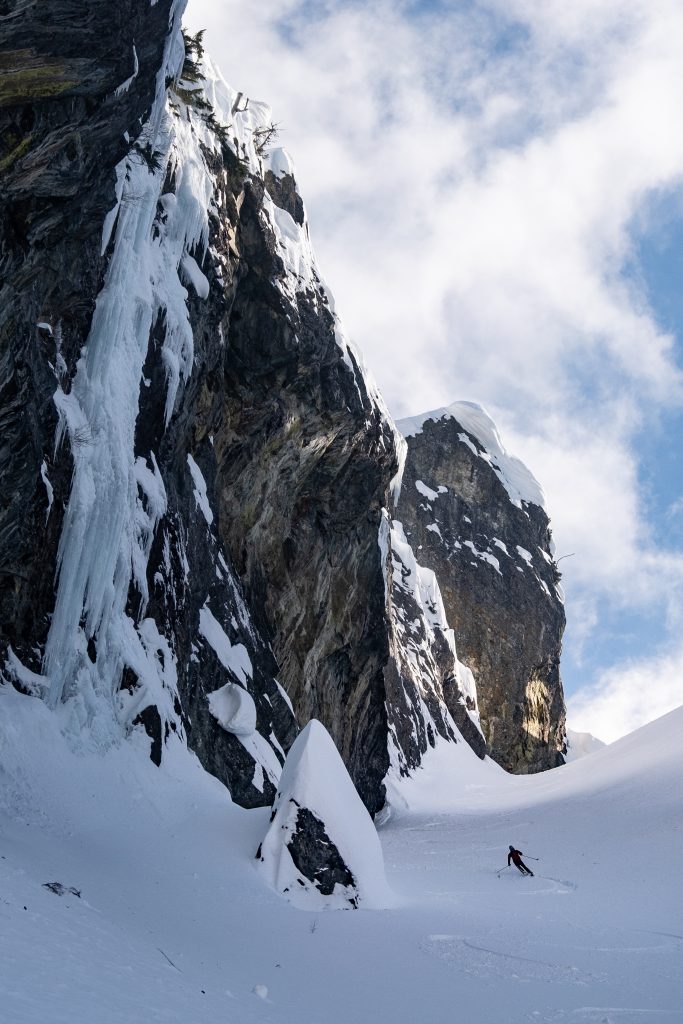 We skinned up the Silver Lining, not wanting to destroy Old Man or Icy Gash. We were able to skin all the way back up; well, Michael and Nick were...I gave into booting near the top when I got annoyed with the steep skintrack. We were able to sneak around the south side of the ridge quickly to access the top of the line. It looked AMAZING...and the snow was once again well protected and soft. 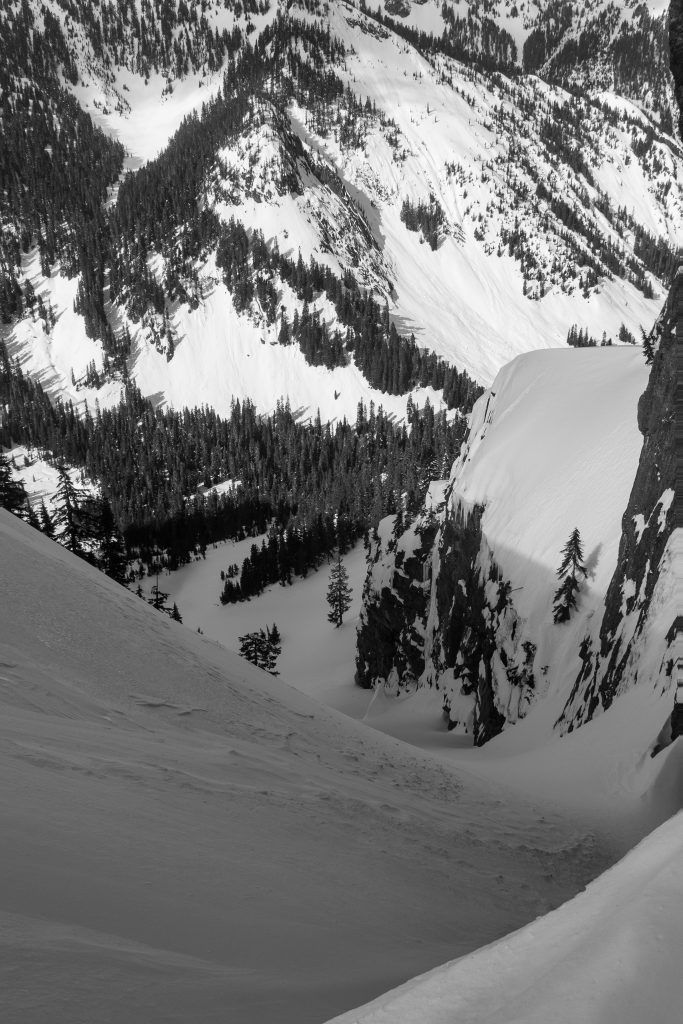 The Icy Gash, from the top.

WOO! I dropped in first, wanting to get pics of Nick and Michael skiing with the ice formation behind them. I cruised down the line, making nice wide turns. The Icy Gash is wide, not really a narrow couloir but a super aesthetic line. This was by FAR the best and most exciting line of the day. 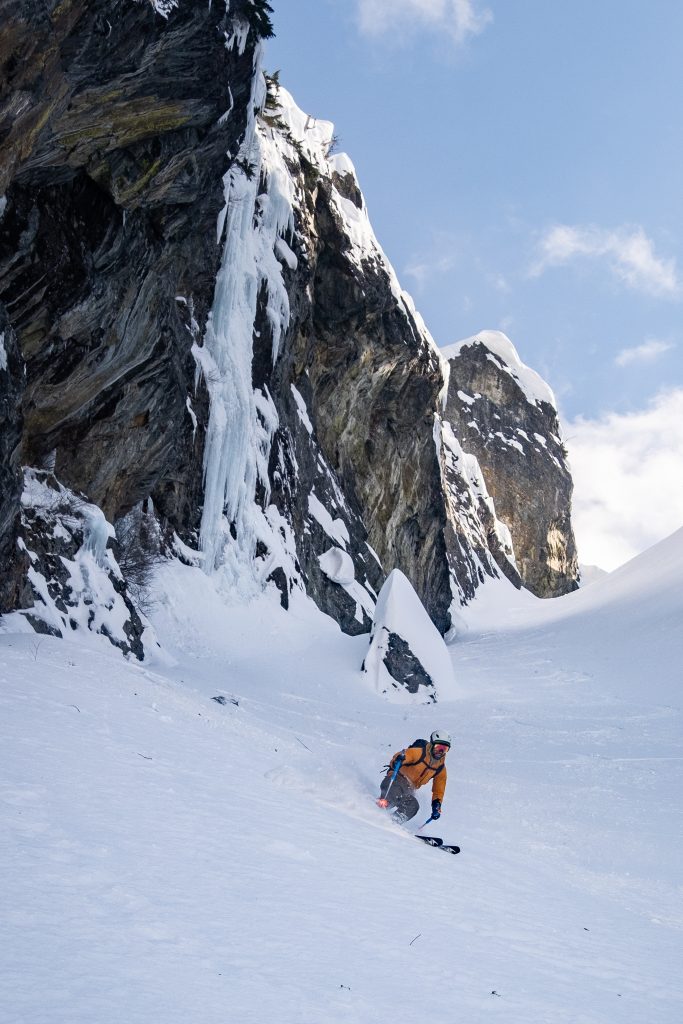 The shot I wanted!

We skinned out the Silver Lining one last time and skied out the way we had approached, via Kendall Lakes to the snowshoe trail. A few short stints of poling and skating across the lakes ensued, but nothing bad. Before long we were skiing out the very flat snowshoe track to the road and back to the car. A great day in the Kendall Adventure Zone!

Been there but was not aware of some of those lines - nice map and pics.  Looks like a great day