**Videos in link above, since they didn't embed here in the TAY report.**

Anthony, Nick, and I headed out from the Paradise parking lot at 4:45 AM. We figured it'd take us around 7 hours to get to the summit from the car and we wanted to aim for dropping right around 1-2 PM. We didn't want to spend too much time at the top waiting in horrendous winds. We cruised up to Muir in 2 hrs 45 mins and had our permit checked by a ranger on our way through (good thing we got one). We stayed unroped until we got to the Ingraham Flats and then roped up there for the climb up the Ingraham. There were now 2 ladders on the route: one smaller one that was just a footbridge, then one that was strung across a probably 6 ft crevasse. 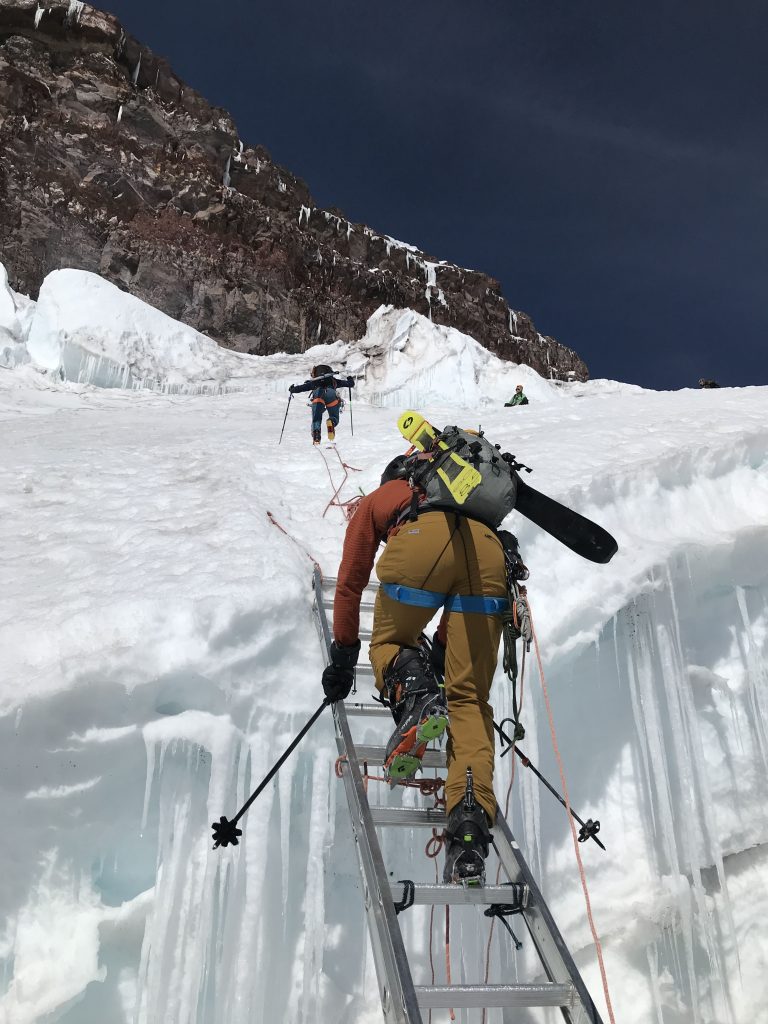 Anthony walking across the second ladder.

There were many parties descending as we climbed and we got delayed climbing the second ladder as a group of 3 downclimbed it. It wasn't an ideal position, as we were directly in the line of fire of rockfall from Gibraltar Rock above. The ID was still "in", but there was significant rockfall hazard to consider. We tried our best to scurry through this section as fast as we could, but it wasn't our favorite. The winds began to pick up as we neared the crater rim and we went from baselayers for almost all of the climb to puffies and hardshells at the crater rim. There were blasts of 40 mph winds as we crested the crater...not the most fun.

We reached the crater rim in 6 hrs 45 mins and headed straight for the steam vents to find shelter. !-- wp:video {"id":6265,"src":"https://engineeredforadventure.com/wp-content/uploads/2022/07/IMG_5592-1.mov","align":"center"} --> Sofia and John weren't far behind us, maybe an hour or so. They had started ahead of us and we agreed to wait up on the summit plateau and drop the line together. We'd be a group of 5 but we could manage the descent, as everyone was a confident skier. We dropped from the summit right around 1 PM in howling winds.

There was wind whipped powder off the summit which made turns more pleasant than ice! I led Anthony and Nick P over to the Kautz headwall, but after sliding into it for a few turns we found patches of blue rime ice. UH OH. We backed out and side stepped over to John and Sofia, who were waiting up on the Upper Nisqually. Anthony punched through a crevasse on his way over, as he took his skis off and was booting for a short stint. Thankfully he didn't fall all the way through, but a bit spooky. 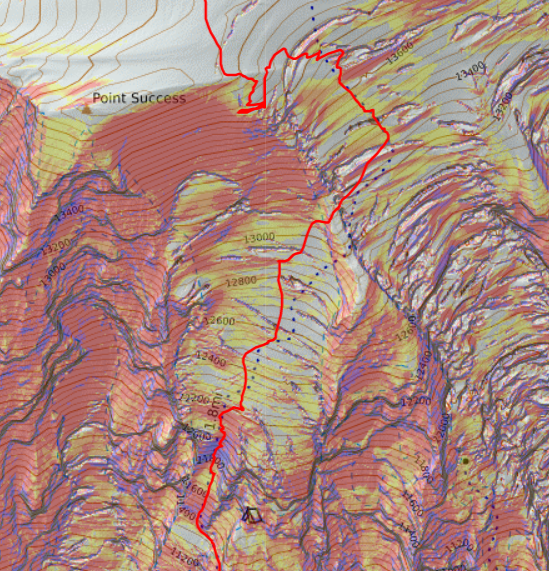 A little bit of funkiness having to avoid blue ice on the headwall.

We took a variation to enter the Kautz to avoid the icy headwall, skiing the Upper Nisqually to the top of the Wapowety Cleaver, where we could cut over to the top of the Kautz. This is typically the way used to descend to the entrance for the Fuhrer Finger, so John and I were familiar with it. Still, there were some crevasses to manage, but nothing terrible. We found good soft, creamy snow on our way down! !-- wp:video {"id":6267,"src":"https://engineeredforadventure.com/wp-content/uploads/2022/07/IMG_5593-1.mov","align":"center"} --> Once at the top of the Wapowety Cleaver, crossing over to the Kautz was very straightforward.

We found AWESOME snow on the upper Kautz and were STOKED for what was to come! John described the snow as 'queso', a creamy thicker corn that was not quite consolidated after the new snowfall. !-- wp:video {"id":6272,"src":"https://engineeredforadventure.com/wp-content/uploads/2022/07/IMG_5594.mov","align":"center"} --> We stopped above the Kautz 'chute', the roll-over of ~50 degrees for ~200' or so. We saw a group of 5-6 climbers in the chute and didn't want to sluff them as we skied down. They reported some icy sections, which made us a bit cautious, but skiing through it we didn't find any ice. Anthony led the way and then I followed. The chute was nice smooth corn, with some crust that could be felt leaning into turns. It wasn't icy though by 2 PM. Probably ~2 inches of soft snow on a firm base.

The cross-over to Camp Hazard was filled in and straightforward. There was one big step down and then a step up, both involving a bit of gymnastics to skirt the rocks with your skis. Nothing crazy though...Typically the cross-over involves a short hand line rappel, but this year it's so filled in no weirdness! 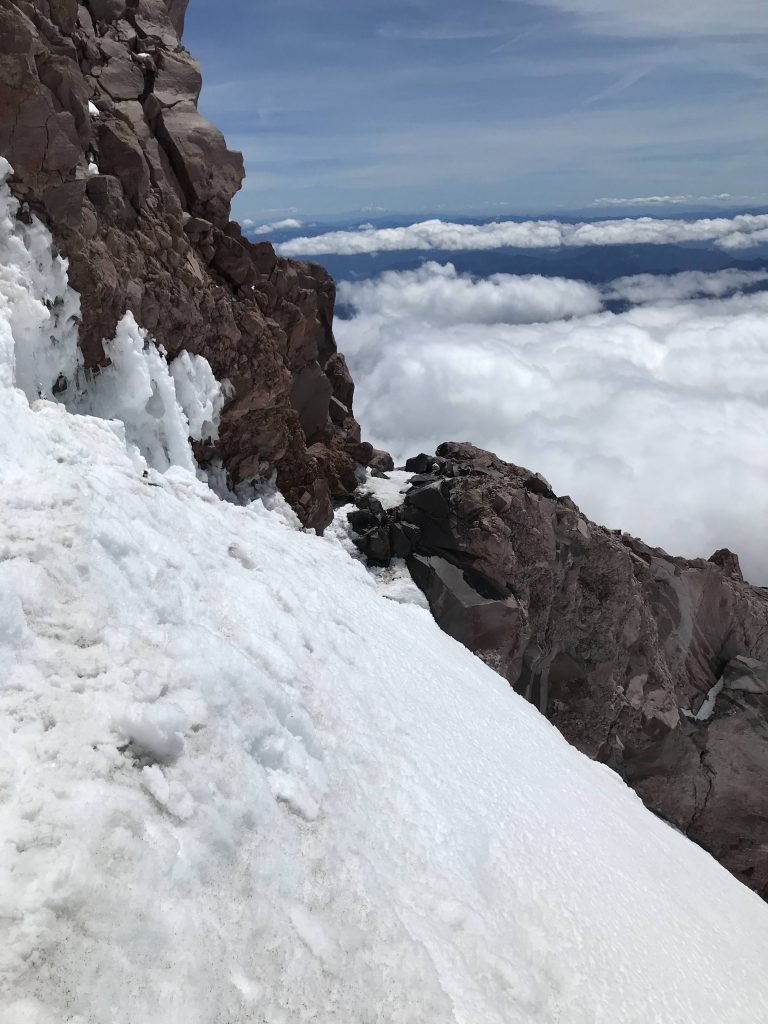 Once at Camp Hazard, we got the cherry on top: skiing the full Turtle all the way down to the Nisqually! The upper Turtle was slightly overcooked corn, which further down turned to total mank...but that's a proper volcano buffet LOL. We had a fun time looking back up at the Wilson Headwall and the Fuhrer Thumb on our way down. 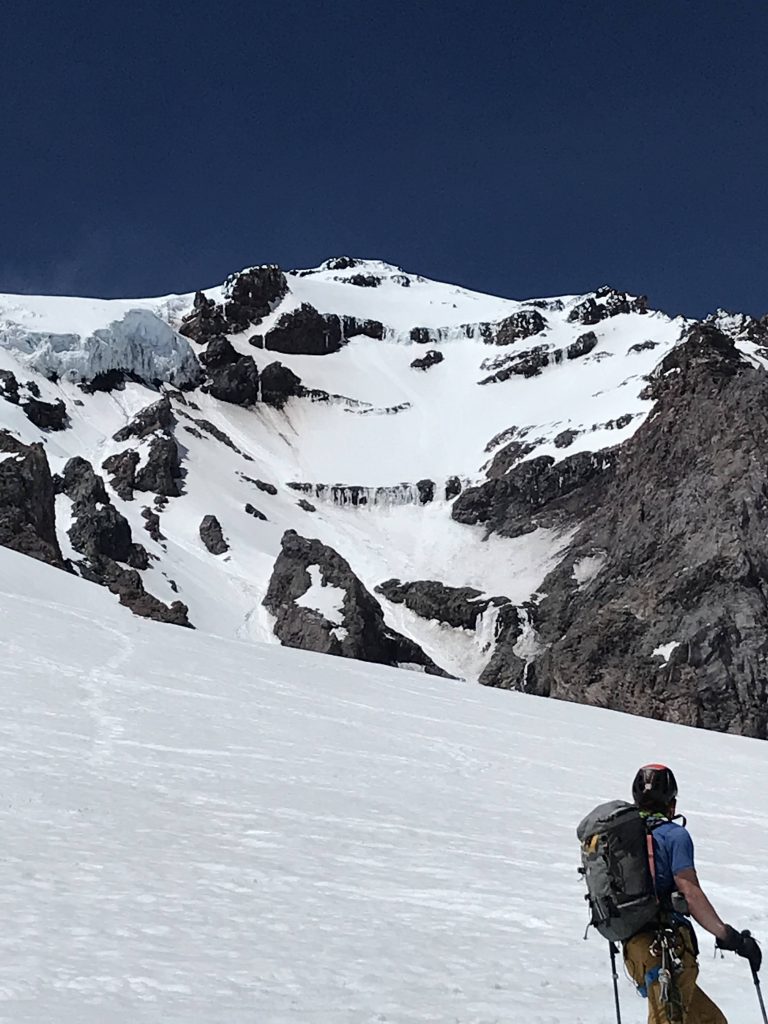 Anthony looking back up at the Wilson Headwall. 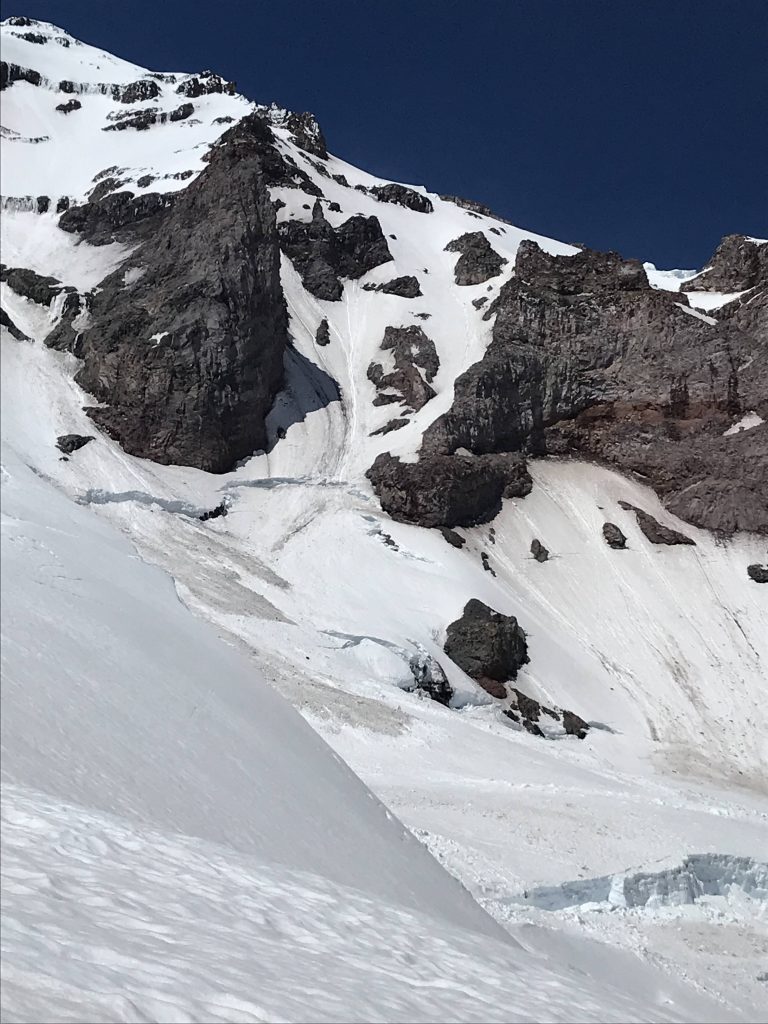 Looking over at the Fuhrer Thumb. We reached the cars in 11 hours round trip and were ecstatic to have cold drinks in the car. Full value day! 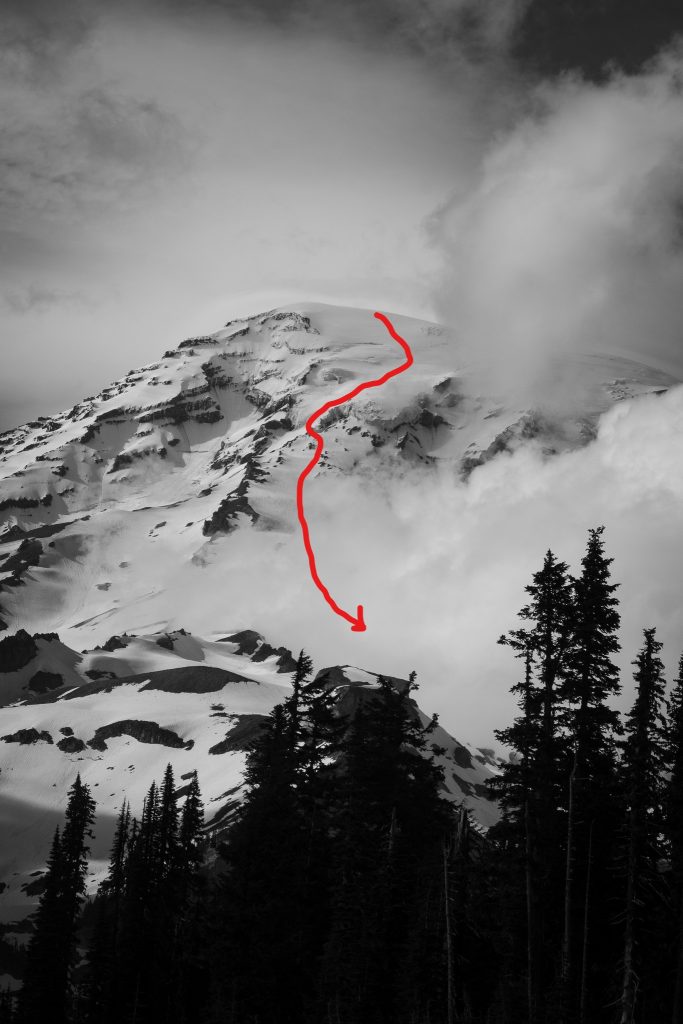 Looking back at the route from the parking lot.

Ooooh - nice variation on the Kautz - video looks like snow was pretty decent - next year!!