6/15/08
WA Cascades West Slopes North (Mt Baker)
7778
2
Posted by David_Coleman on 7/6/08 6:28am
Since my good friend Paul Belitz was in town for a conference, he decided to extend the trip so that he could get out with some old friends and ski.  We had kicked around a bunch of ideas, since he hadn't done anything big in some time.  Unfortunately, he's been molded into one of those SoCal folks since he left Seattle a couple of years ago.  He told me about stories of Escalades & fake boobs that dominate the part of San Diego he spends most of his time.

Anyway, we decided on Ruth since none of us in our party had ever skied up in that area.  I've always wanted to see the knar that the Price Glacier brings to that side of Shuksan.  Andalkar, Carrigan, Belitz and I left the trailhead sometime before 10am.  There was some blowdown on the trail, but nothing significant.  A couple of interesting creek crossings and we found ourselves on continuous snow below Hannagan Pass.  After a lengthy side traverse on foot (too steep for efficient skinning), we were able to boot straight up the north face.  The summit was amazing, 360 degree views that are probably some of the best I've seen in WA.

After a leisurely rest atop Ruth, I was anxious to head over to Icy, but nobody else in our gang was really game on this day.  Headed down sometime after 2, and headed for the direct center line down Ruth.  This lead us to a narrow chute that surprised us with a mandatory 3'+ huck over a moat that was open lower down across the entire face.  Being in the shade with a hard landing didn't help make matters any better.  Suncups were minimal and conditions were fast.  Lower down the snow became a bit grabby.  Decided to head out the creek drainage and boot up to find the trail.  This was perhaps more trouble than it was worth in retrospect.  Nonetheless, allowed us to ski approx. 3k for the day in an absolutely amazing part of the North Cascades.

Below, Paul rips the north face, while Hannah prepares to huck the crux. 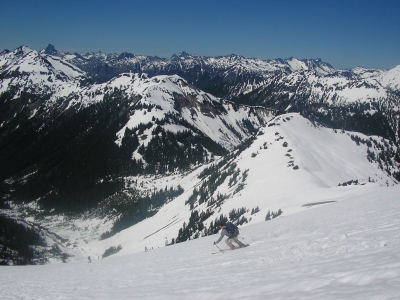 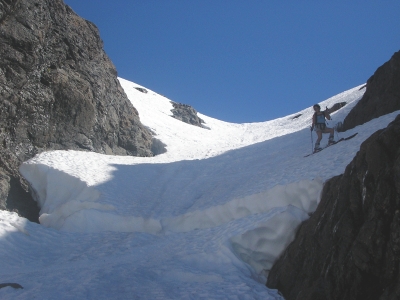 7/8/08 10:16am
lisa
Sounds like you guys enjoyed a great trip.  The views from Ruth I think are the best I have seen of the Pickets and North Cascades.  Combining Icy Peak in a day would be a feat indeed.
7/9/08 2:11pm
alan-brunelle
I had missed this report, but am glad that I looked back in June to see it posted.  I have done it later in season and loved it then, but it looked to be in great form when you hit it.

I was considering it for the next week or so as an overnight.  Presumably the trail will be free of snow by then, but the hope would be that the bulk of the upper mountain would be in good shape for a couple days of yo-yo skiing.

I will have to look back into my old photos and see what time I actually made my trip.  I thought that it was late June but your photos show way more snow that what I had those years ago.