7/27/19
1101
3
Posted by lil_b on 8/2/19 1:46am
I have spent a lot of this July in Corvallis lamenting the reality that I don't live somewhere closer to mountains like Seattle or Anchorage. I'm familiar with "turns all year," but the whole thing felt like a lot of work after an awesome winter of skiing in the Cascades (and all the requisite driving).

I've been researching Mt. Jefferson lines for next winter, and last week came across this pretty dang inspirational post on WildSnow. https://www.wildsnow.com/5772/backcountry-skiing-summer-pnw/. Good corn skiing on Mt. Jefferson in August!? I checked the date of my last ski this season: June 2nd. There was one more weekend left in July. Maybe turns all year?

I left town late, around 2pm, on another hot Saturday and hiked in from the Woodpecker Trailhead. Pretty soon I was in a world of wide-eyed PCT hikers and crossing the alpine wildflowers along Whitewater Creek. A couple hours later I was skinning! In late July! Yeah!

I bivied in the wonderfully spacious tent sites at the base of the snowfield and headed back up the glacier around 6am. There was a sweet walkway around the bergshrung, then pitch of alpine ice and the spectacular "5.2" scramble along the ridge to the summit. The loose tallus at below the summit felt less sketchy than melting rime in the same spot a couple months ago.

There was a climber beginning their descent from the saddle as I returned to my stached skis. They tentative began to down-climb the ice pitch and then described their situation to me. "I might fall." and "Whatever happens, happens." are not what anyone wants to say or hear on an ice face above a crevasse. I skied the hanging ramp around the first bergshrund, and then changed into crampons to booted back up the ski line to meet them halfway down the ramp. We descended back to my skis and booted around the second, larger bergshrund. Abandoning the climber to ski this dirty, partially uphill section seemed pretty harsh. I left the climber below the bergshrunds and skied good corn back the bivy. (Descent route in photo: Red is skiing. Green is booting.)

A bonus snow patch took me pretty close to Bays Lake in Jefferson Park. I side-hilled through the burn back to the PCT, then to my car and a hot pot dinner in Corvallis. A great outing close to home! Thinking about carrying skis up Squak Glacier later this month. 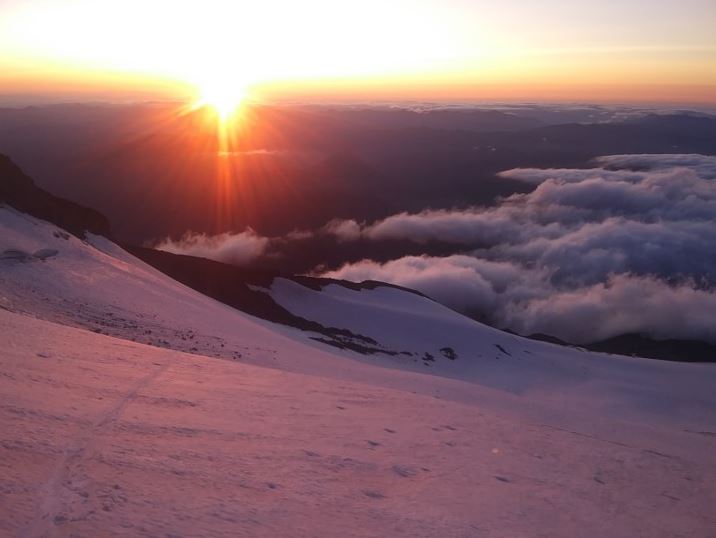 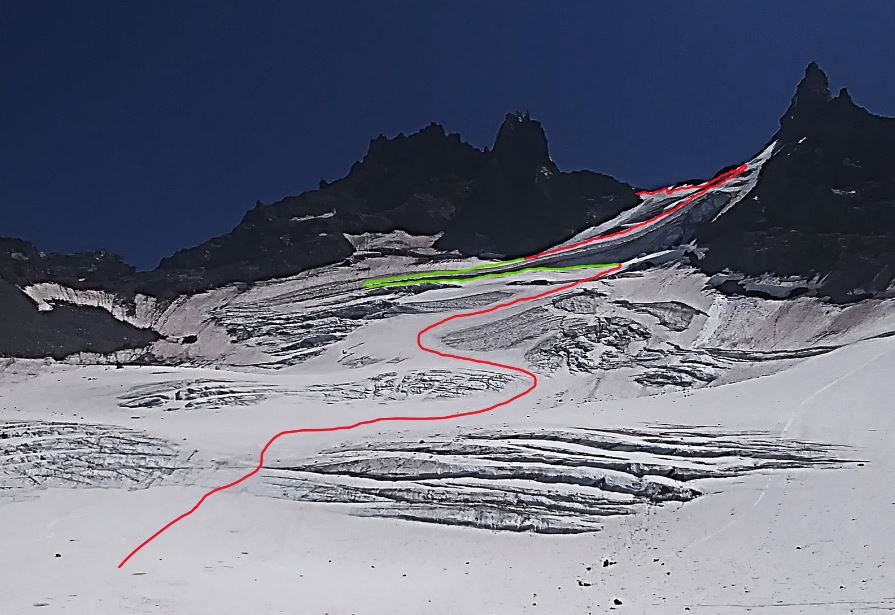 Thanks! Hard to say. :/ but I felt some obligation to stick around after putting in fresh footprints to follow. Reinforced my idea that all of these Cascades should be attempted by their easiest routes first.
2019-08-26 09:29:52
lil_b