We have put this volcano off over the years because our June climbing window usually has the summit block covered in white which means it is covered in full with rime ice.

We made decent time to the summit block. The traverse was not to bad. We brought 4 pickets and a 60 meter rope and used them. It is possible not to use them. The traverse is about 45-50 but a fall would likely not be fatal as the slope mellows out a few hundred feet below. It is actually skiable if you were in a resort and an above average skier. We were on the traverse between 12-1. The sun was out on our climb up but clouds started to creep in as we started the traverse. We could kick steps on the main traverse so it wasn't to bad. If it were ice (the west traverse was much harder ice and similar in pitch) it is a bit more spooky. I summited Jefferson in late July last year and we did not protect the traverse on the decent. We simul climbed on the decent for this trip using two pickets for the full traverse.

The South facing summit block was fully covered in rime ice which we could see from 1000's of feet below and miles away as is usual this time of year. After doing the main traverse we proceeded to traverse to the west side hoping we could find some rock (we had a few cams and ice screws). The GPX route we had was completely covered in Rime ice.

My partner investigated the Rime ice which was brittle. I was recovering from being spooked and tired from the 4 pointing on the west traverse which had become hard ice. My ultralight crampon had actually released from my boot so I had to figure that out on a very steep pitch. A fall on the west traverse would likely not be fatal in these conditions as well as the slope mellows out far below. There may be a cliff band for a bit but not 100% sure what was below.

The clouds and wind started to pick up on the west traverse as well. After investigating the Rime ice we decided it was out of our league. We made the traverse back to the ridge between the main south facing traverse. The south face of the summit block is the rap line when the summit block is exposed rock. I had climbed this with no protection last July and it is a pretty easy class 4. We also down climbed it without pro. But in June it was covered in rime ice. There was a snow pitch going up to about 30' from the summit. It was very steep at the end and we decided not to go up to it as the clouds were dropping quickly and we were 98% sure we couldn't climb it safely. 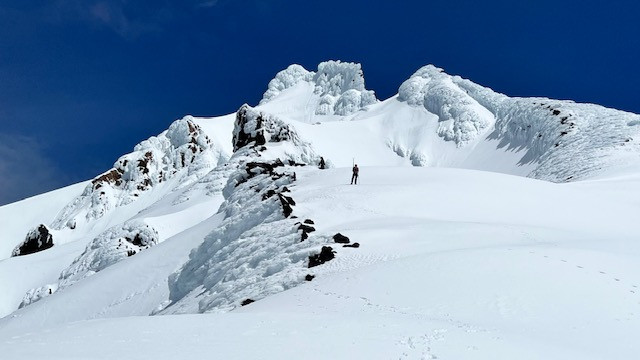 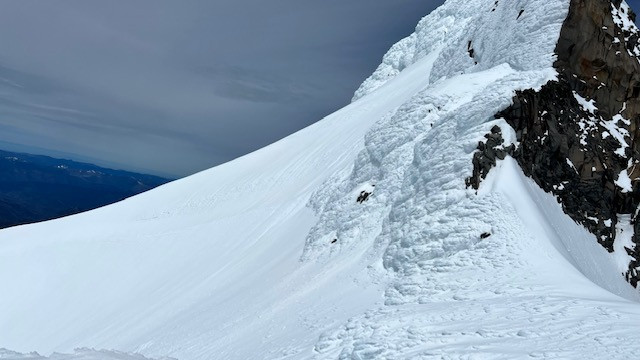 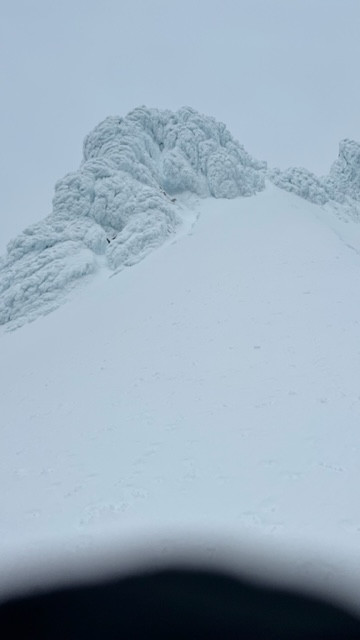 This is a view from the ridge after the traversing west from red pass. 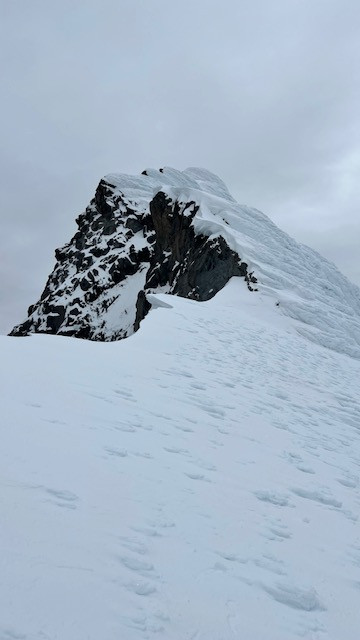 this is facing the standard climbing route (buried in rime) after doing a full traverse from red pass south all the way to north side. There are basically two significant traverses with a ridge in between.