We obtained a permit to camp in the Triad cross-country zone of North Cascades National Park for 6/18-6/20/2021 in the lottery for NoCaNP advance backcountry reservations. I've been excited to explore this zone on skis after doing a trail run to Hidden Lake Lookout in August of 2020. After a stop in Marblemount to pick up our permit we drove to the trailhead - FS road 1540 is pretty rough and I wouldn’t take a passenger car or sedan up it. We drove a Land Rover Discovery truck and a Toyota SUV there. The road is snow-free. Some pesky biting insects at the trailhead gave me some itchy bites fast!

The first .75 miles of trail is snow free then there are intermittent snow patches to about .9 miles, where you first exit the woods and can see the wide open avalanche slope that the trail crisscrosses before it finally takes a sharp bend to climber's right/south. The trail then proceeds southerly along a bench towards the saddle overlooking Hidden Lake where you then embark (in snow-free summertime conditions) on the final rock scramble to the lookout itself.  The trail is however a mess right now- littered with lots of tree branches and debris, several fallen logs including one that is hard to get around and multiple flowing streams of melt water that add water crossings. Some of these are difficult to cross without getting your feet wet. Such is the price to ski in June in the North Cascades... we soldiered on, carrying our heavy loads.

After .9 miles (at the point where you exit the woods) there is a soup of mud and water and slushy snow. This is where we transitioned to skinning. After the soup course you get a serving of dirty snow with lots of avalanche debris and rocks, tree fragments and actual dirt mixed in. (Was there a glide avalanche?) There is water flowing in multiple places underneath the snow cover and rotten snow bridges. There's also some brushy vegetation and an open stream you have to cross. Then if you keep ascending finally you'll get an entree of sun-cupped snow that is about as sprinkled with branches and rocks as you’d expect in June. But at least not as muddy and no more vegetation! There is one waterfall flowing off a large treed knob - we steered climber's left of that knob since a cliff blocks your ascent on the right. (After you leave the big avalanche slope the remainder of the summertime trail route to the lookout is under multiple feet of snow but the melt is on.)

On 6/18/21 we initially ascended to Sibley Pass in a beeline, just dodging the obvious obstacles. We set up camp on a high point on the ridge in the Triad cross-country zone as per our NoCaNP permit. Plenty of melting water around, no need to melt snow on our stoves.

On 6/19/21 the weather was overcast, gray, windy, cold and threatening precipitation. We skied down from the ridge and traversed along the bench roughly parallel to the summer trail and got some ski turns in along the way. We reached the saddle overlooking Hidden Lake and the slopes you’d have to cross to reach the lookout were steep, completely snow covered (no tracks) and had large cornices. Looked like you would need a rope for protection to do it safely. We had crampons and ice axes in addition to our ski gear and we still decided it was not worth the risk to try to make it to the lookout. If you fell you’d slide a very long ways or if the cornices collapsed then you’d be seriously exposed and the snow could sweep you down to the lake below. We tried at one point to scramble up to the ridge to see if we could travel northwards on the ridge's spine and then drop in...  but carrying skis and rock scrambling was kind of annoying so we bailed on that idea and skied around more instead.

We noted one or 2 recent avalanche sloughs that were possibly human-triggered as well as significant melt and shrinking of the snowpack each day - rocks moving, tent stakes melting out and needing to be re-staked, that sort of thing. We saw a small number of people each day. Only one other tent with an unknown number of campers on the approach to Hidden Lake though and no one else anywhere near our campsite on the ridgeline so we enjoyed the sunsets in solitude.

On Sunday 6/20/21 the sunshine returned and we enjoyed a pleasant morning in camp before packing up and skiing down to the trail where we transitioned to hiking and carrying out our skis. Around 11 am conditions up high were ideal for skiing.

With the benefit of seeing just how snowy this area gets and how long the snow lasts, as well as how skiable the ridgeline heading south is, next time I'll simply camp on national forest land along the summer trail to the lookout. That's where a lot of good skiing can be found anyway and I would spare myself the effort of hauling 45+ lbs up 3,000 feet! 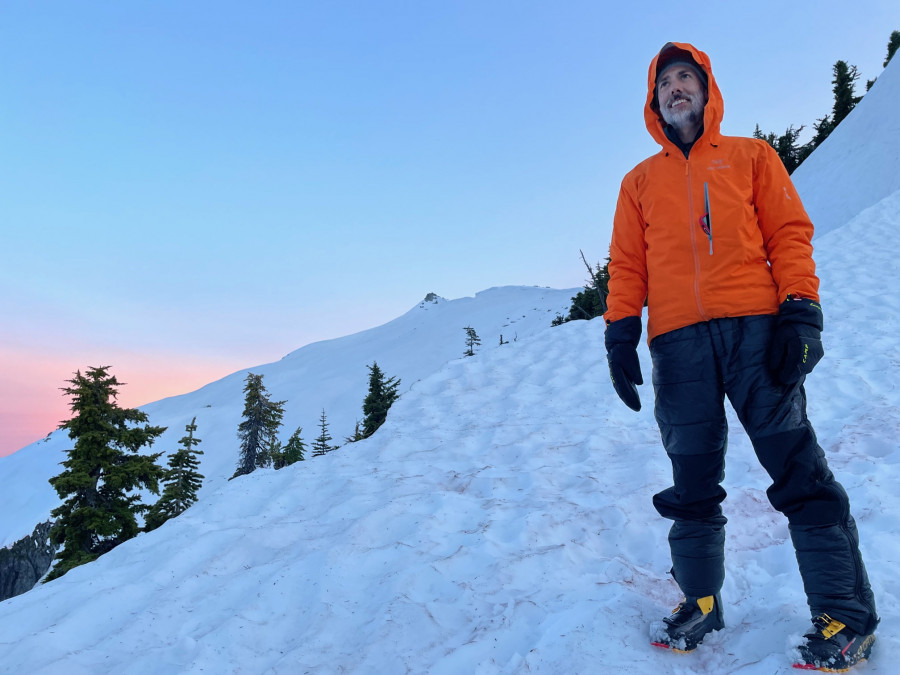 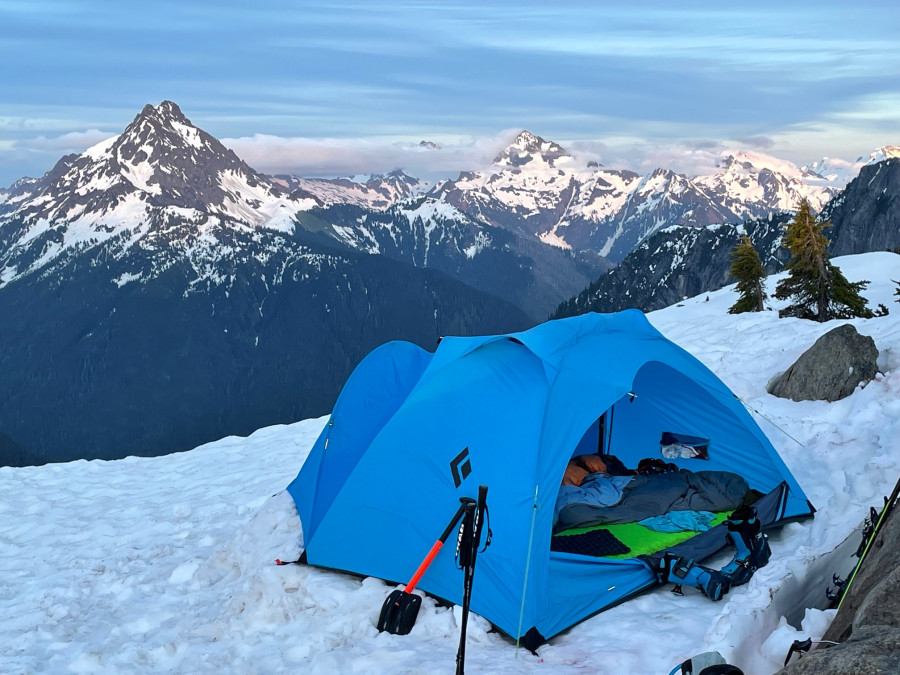 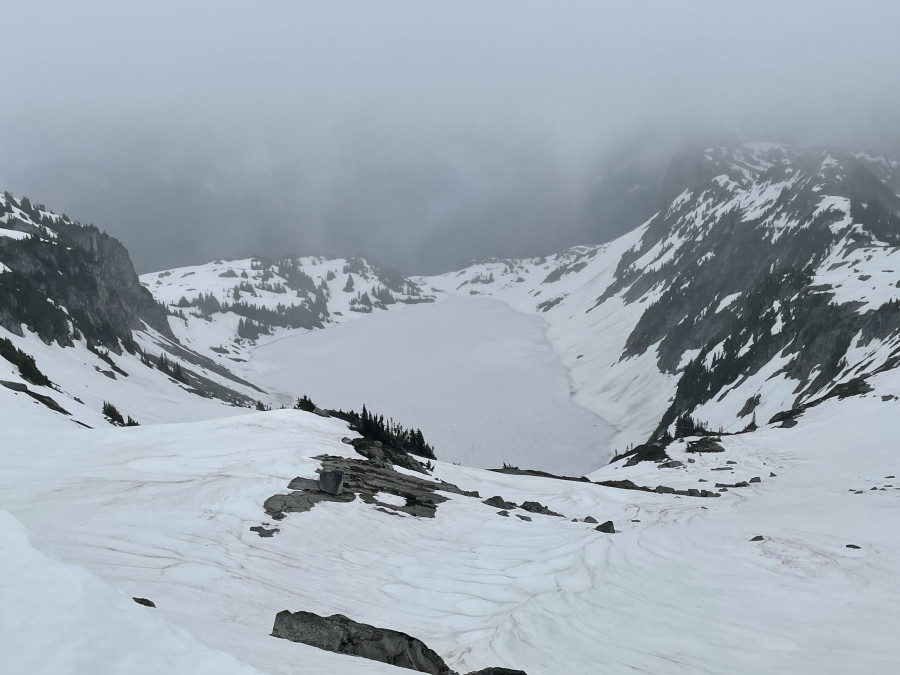 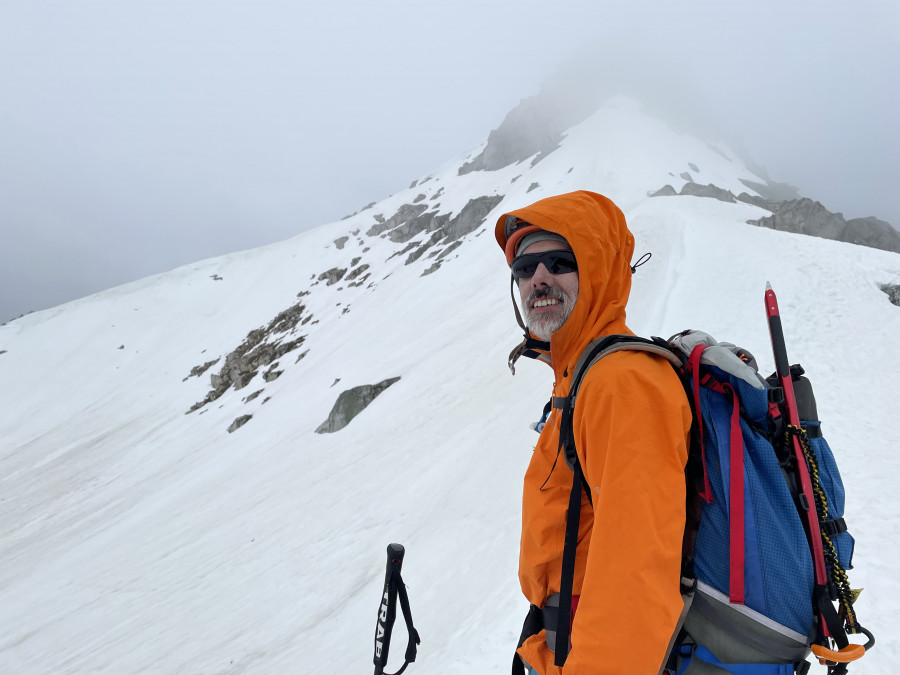 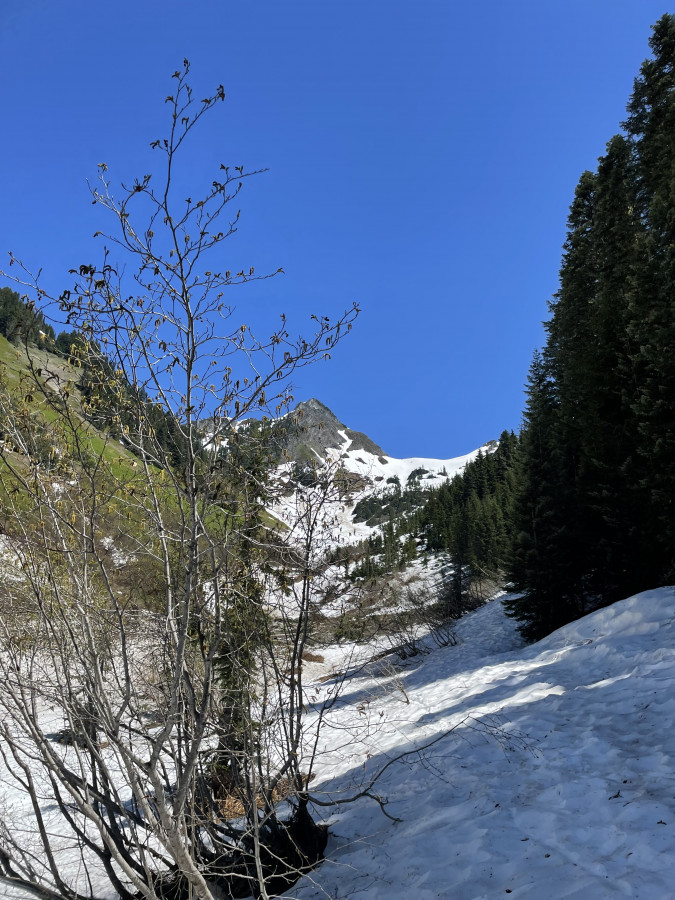 End of the dirt trail below Sibley Pass after .9 miles of hiking 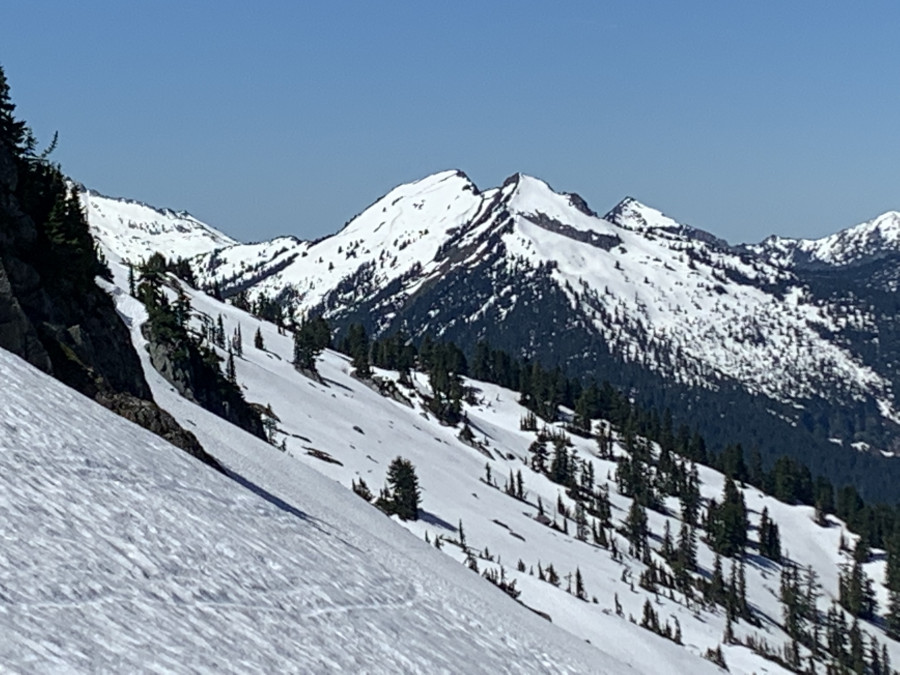 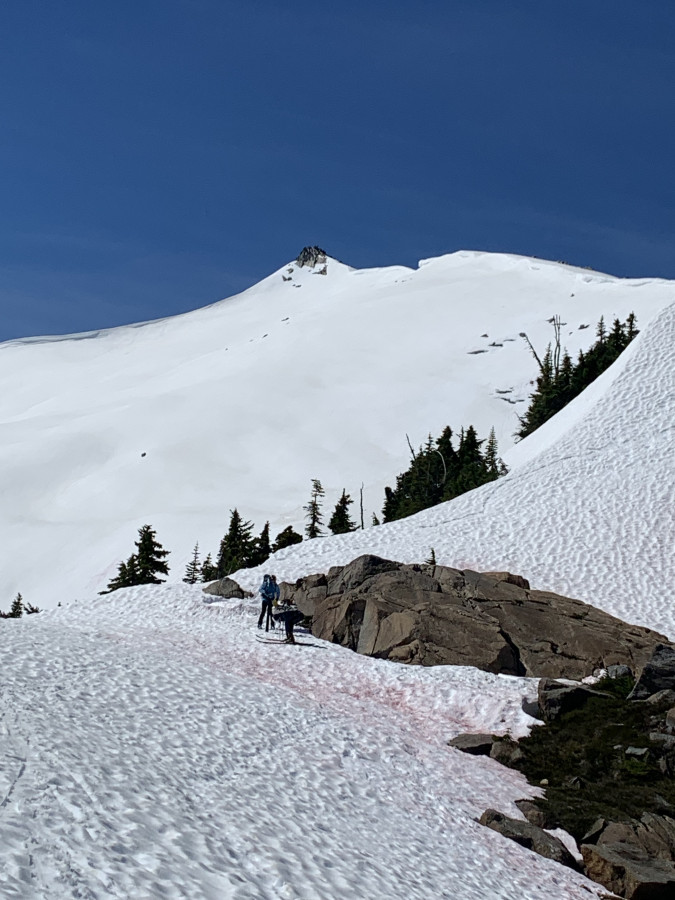 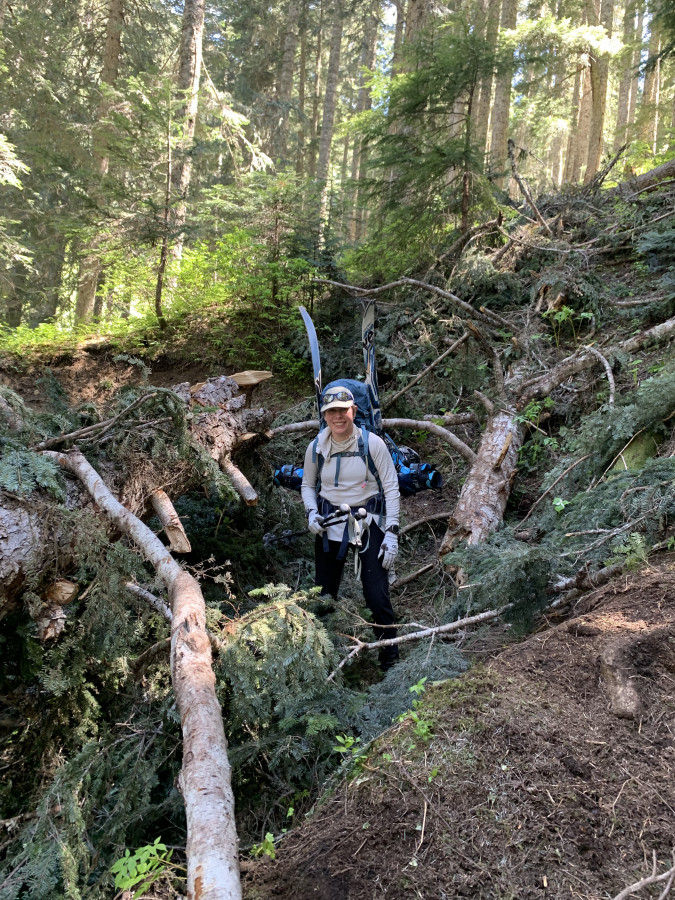