I’d been kicking around the idea of ski traverse of the Goat Rocks for a while and finally decided to make an attempt this spring. Three of my oldest ski partners, Dan and Peter (who also did the Pickets Traverse with me) and my dad, formed a solid team for the endeavor. With Peter coming from Bellingham we decided to opt for a Cascade hardman alpine start: lunch at Cliff Droppers in Packwood and a noon ticket lift assist top of Hogback Mountain at White Pass. Unfortunately, our attempt at laziness was not to be. The upper chairlifts were on a wind hold when we arrived and after checking the wind data, we discovered 80+ MPH winds at the top with an unbelievable gust in excess of 100 MPH earlier that morning. The wind was forecasted to subside that evening so after some discussion we opted to skin the 5 miles in to the Scatter Creek TH via FS 1207, then skin another 5 miles or so to Tieton pass. The first day was uneventful although we were a bit surprised at how little snow there was in the valley. We made camp just down from the pass in case wind picked back up, which luckily, it didn’t.

After breaking camp on Day 2, we skinned up towards the open slopes below Old Snowy but got sucked up a little high on the ridge and ended up spending too much time traversing the steeper slopes and contouring in and out of small gullies. Sticking to the valley bottom until the east rib of Old snowy can be ascended directly looked like the way to go. After tagging the summit we made short traverse beneath the north face of Ives Peak. It was only about 1000’ gain to the summit but the wind event from the day before had scoured the steep upper slopes to ice so we decided to skip it. We were somewhat surprised to discover some old icy ski tracks here although there wasn’t enough to really decipher where they went. We continued traversing as high as we could, until we could round the final rib of McCall basin and drop directly below the high pass guarded by the ramparts of Goat Citadel. We switched back to skins until the winds scoured snow forced us to switch to booting. From the pass, another short rising traverse took us to the summit of Gilbert Peak. After tagging the summit, we hacked out a platform to put on skis about 30 vertical feet down from the summit and skied to the east flank, then dropped into cold powder (in places) on the upper Meade Glacier. We dropped to the Conrad-Meade col and skied icy slopes to dry talus on a flat point (~6700’) above Conrad Lake where we made our second camp.

A cold, icy wind blew most of the night but the rising sun finally coaxed us out of our down cocoons. The wind and cold made the stoves finicky but we finally melted enough snow for breakfast, coffee, and to start the day. The south facing slopes of Tieton looked much gentler by morning light (which is often the case) and after dropping down across the moraine below Conrad Lake, we made quick work of our last major ascent of the traverse. On the summit ridge the wind was ripping so we wasted little time in ripping skins and starting our final descent. We skied down the ridge to a saddle to the east. From there we dropped northeast skiing open slopes and good snow towards Devils Washbasin. We briefly considered traversing over Devil’s Washbasin to try to traverse further down the valley as we dropped but we opted to drop directly down. The Ravine narrowed as we dropped and eventually cliffs and spectacular ice formations forced us to into the narrow gorge which surprising just kept going and going. We had to bypass a couple of waterfalls and open creek sections until eventually we popped into the modestly spaced old growth and eventually meadows in the valley bottom. We had seen the meadows from above and hoped they would take us all the way to the Tieton Meadows trail where we also hoped to find a way across the river. However, it was time to pay the piper. The meadows were rimmed with thick Alder breaks and we spent hours thrashing through brush and crossing swampy areas trying to link open sections of meadow. The one highlight of this section was finding massive fresh bear tracks! Eventually we made it back into the heavy timber and stumbled upon the trail. We crossed the creek on a log jam and found our way back to the road we had taken in two days prior. A long, blister inducing five mile road skin (that somehow seemed to be slightly uphill) finally got us back to the car.

All in all, it was an interesting trip into a unique area. The high route that we originally intended to take, via the Ski Area and Hogback Mountain, would have eliminated the unsavory bushwhack and 10 miles of road skinning, but would have added about 2800’ of elevation gain on the last day. Hard to say which would have been better but the high route would certainly have a much longer lasting and more substantial snowpack. Inquire at the gas station/store about parking in their overnight parking if starting from the ski area (making a purchase can't hurt). 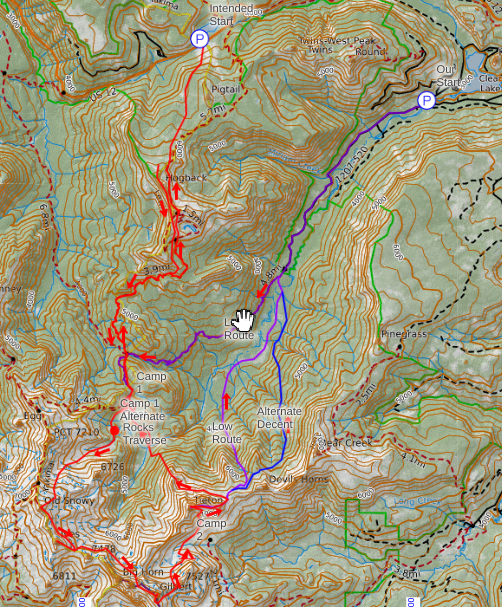 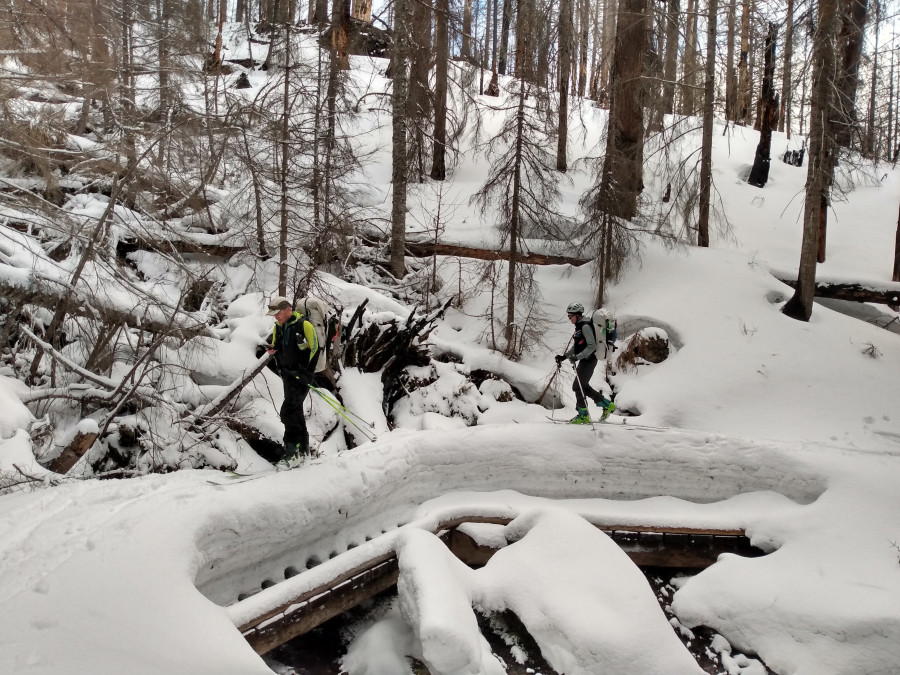 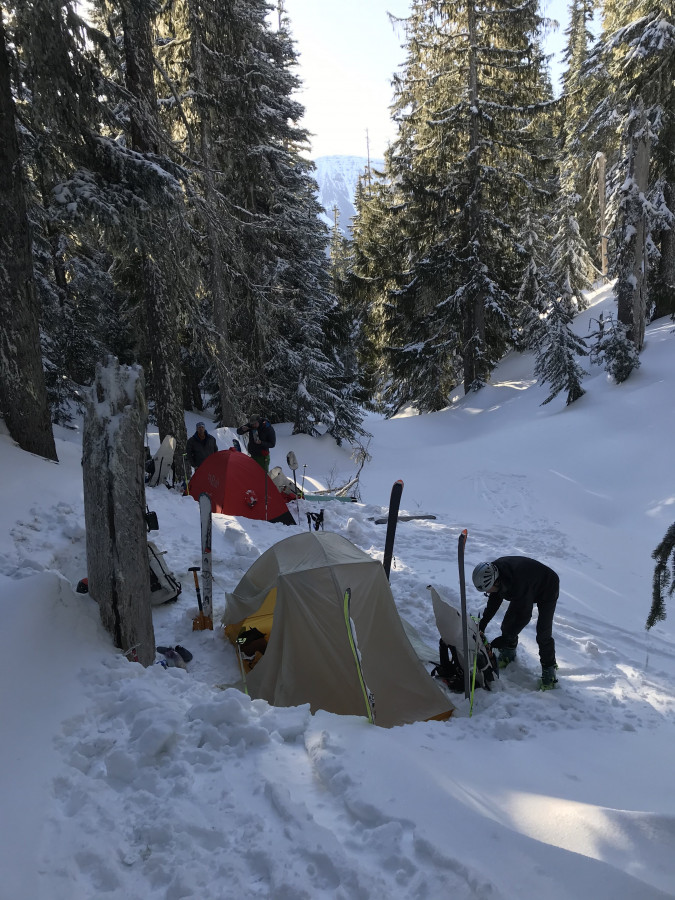 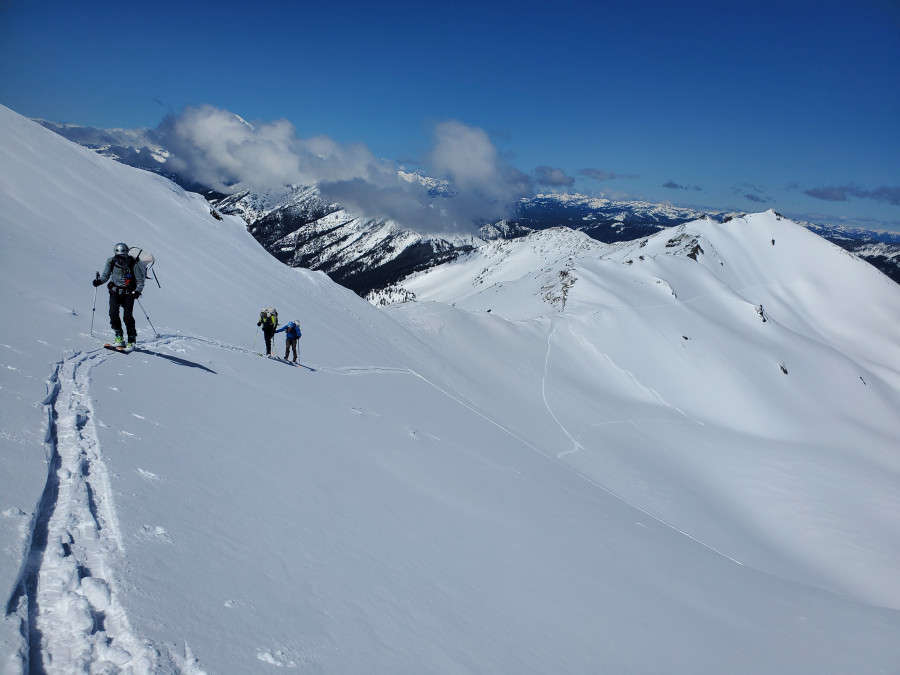 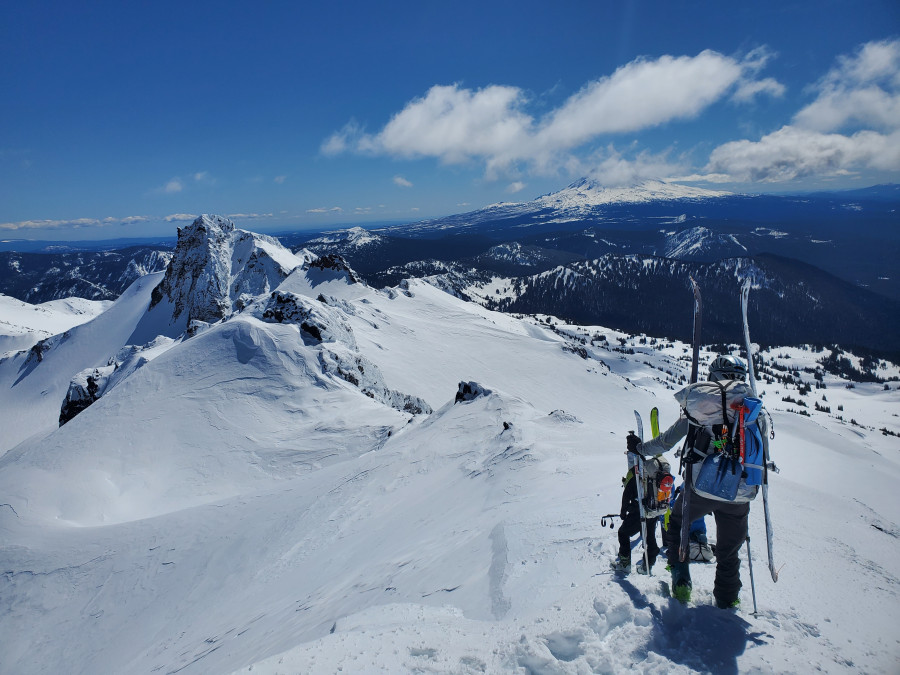 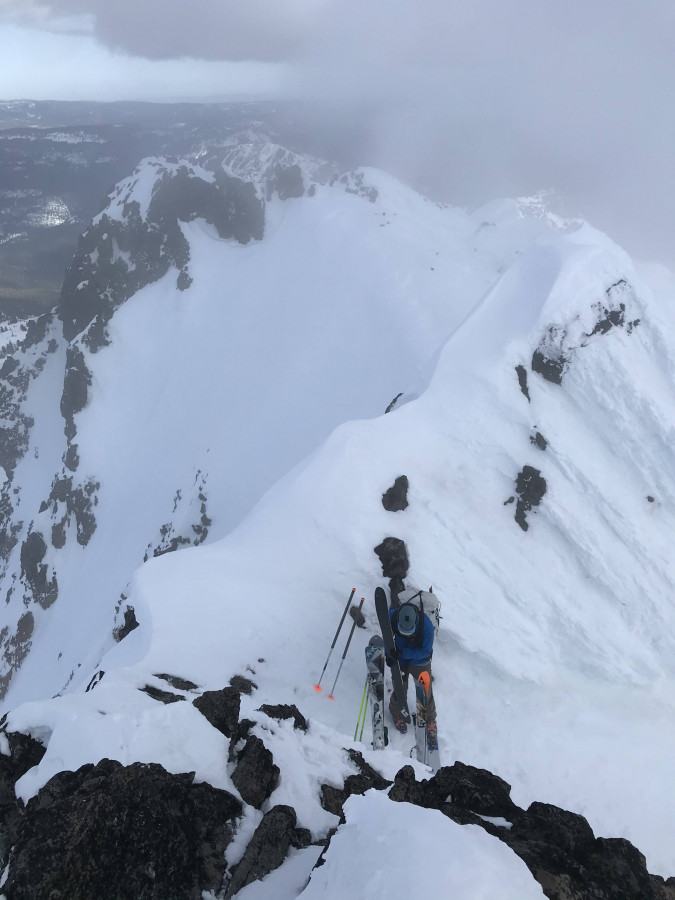 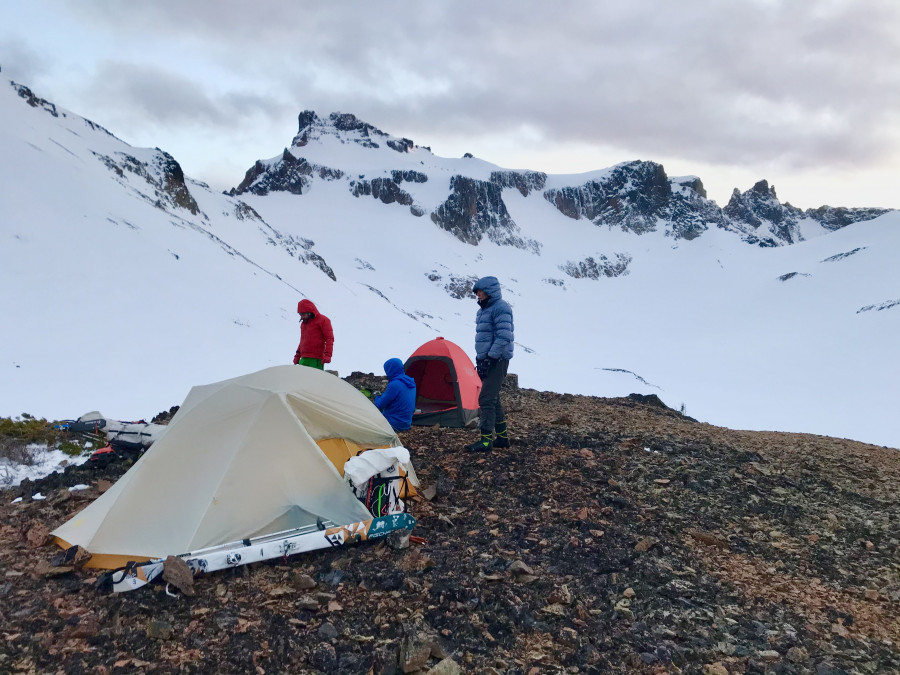 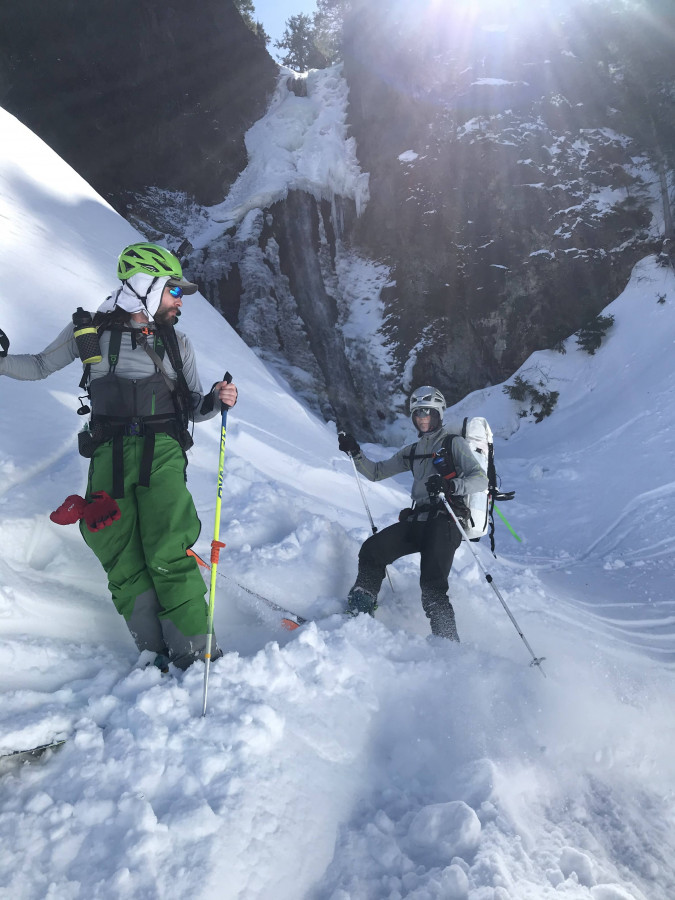 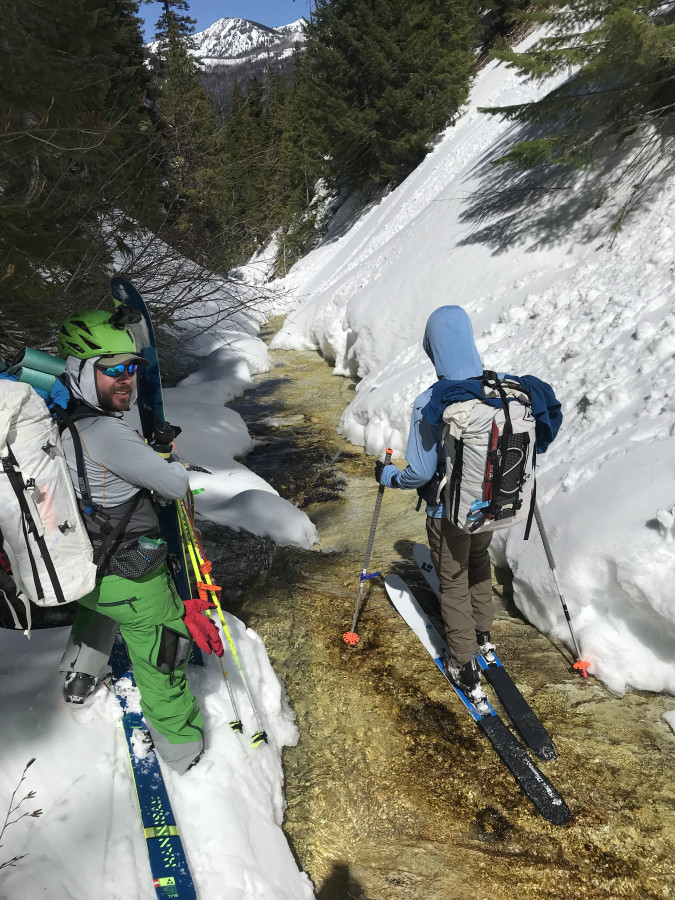