Powder returned to Washington in March, so Kyle Johnson (KJ) and I decided to head out to ski the G-String Couloir off Crystal Peak. The forecast was calling for 2-4 inches overnight at Crystal on Friday after a fairly calm and precipitation-free week; Kyle and I were expecting new snow to cover up solar crust and "shmoo", as KJ called it. I was cautiously optimistic about the conditions and hoping for some Crystal pow...and it delivered. The day started off with some shenanigans...turned out that KJ forgot his food at home...LOL. We walked in to the Crystsal Mountain lodge and bought him some snacks from the cafeteria before heading out. Snow was lightly falling, but it already was going BLUE! Typical Crystal... 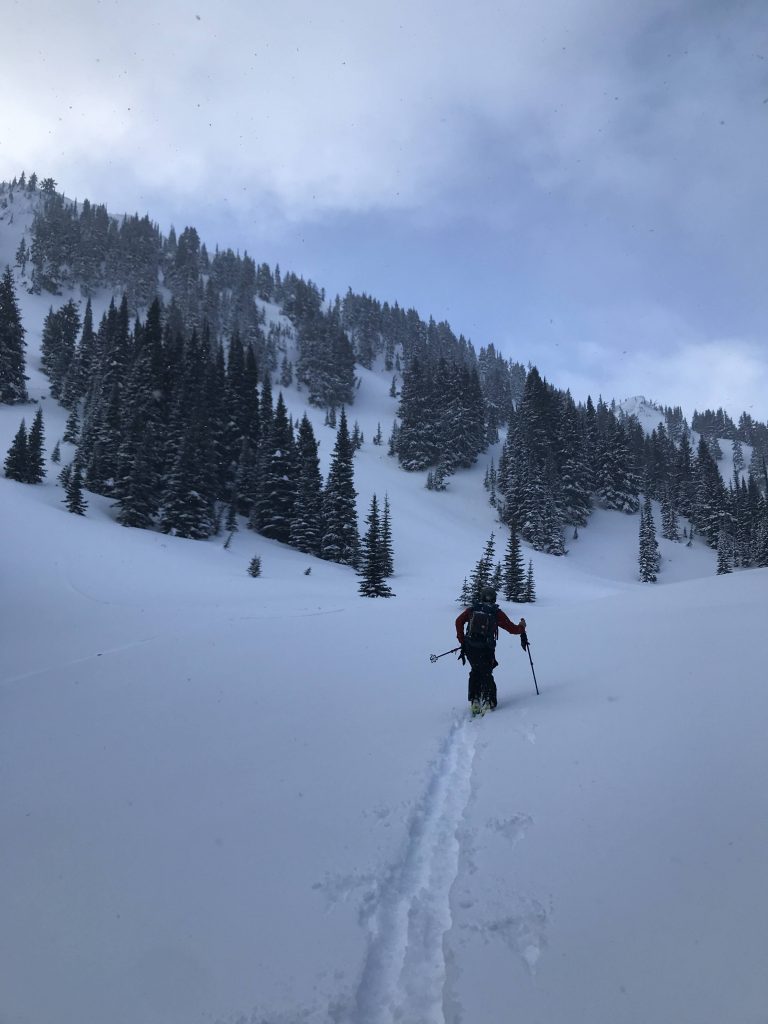 How it always goes blue at Crystal I can't quite understand... We skinned out the Silver Creek Trail from Gold Hills towards Threeway Peak; we wanted to stay out of the resort traffic, even though it was before the lifts were spinning. We didn't set the most efficient skin track, but eventually we reached the gap east of Threeway Peak to begin skiing towards Sourdough Gap. Our initial plan was to ski towards Sheep Lake Couloir first, but after skiing down Sourdough Gap we called an audible and skinned up to the west to Crystal Gap to ski down into Crystal Lakes basin instead. 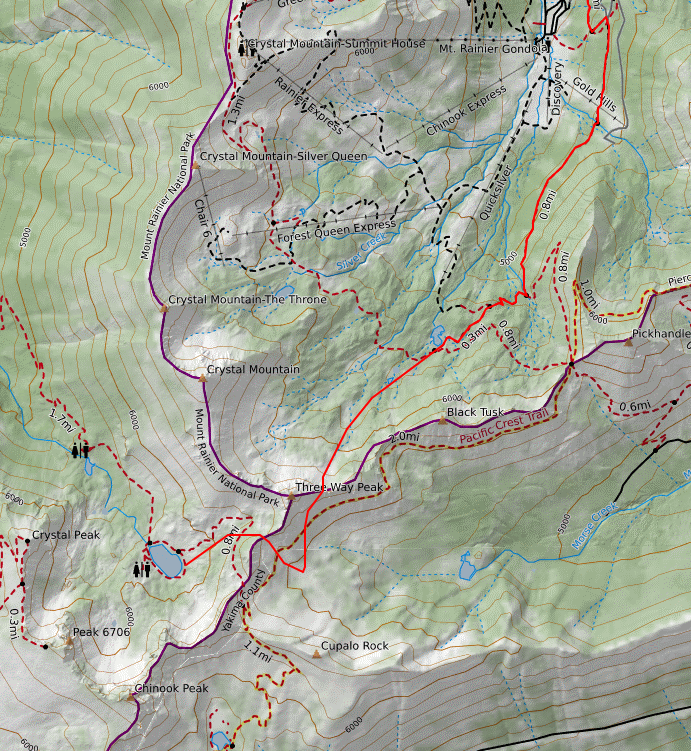 It's a bit of a ways to get back there... The snow was REALLY good underfoot...more like 6 inches instead of the telemetry-reported 3...and it was very dry and powdery. We were excited for a good day ahead. 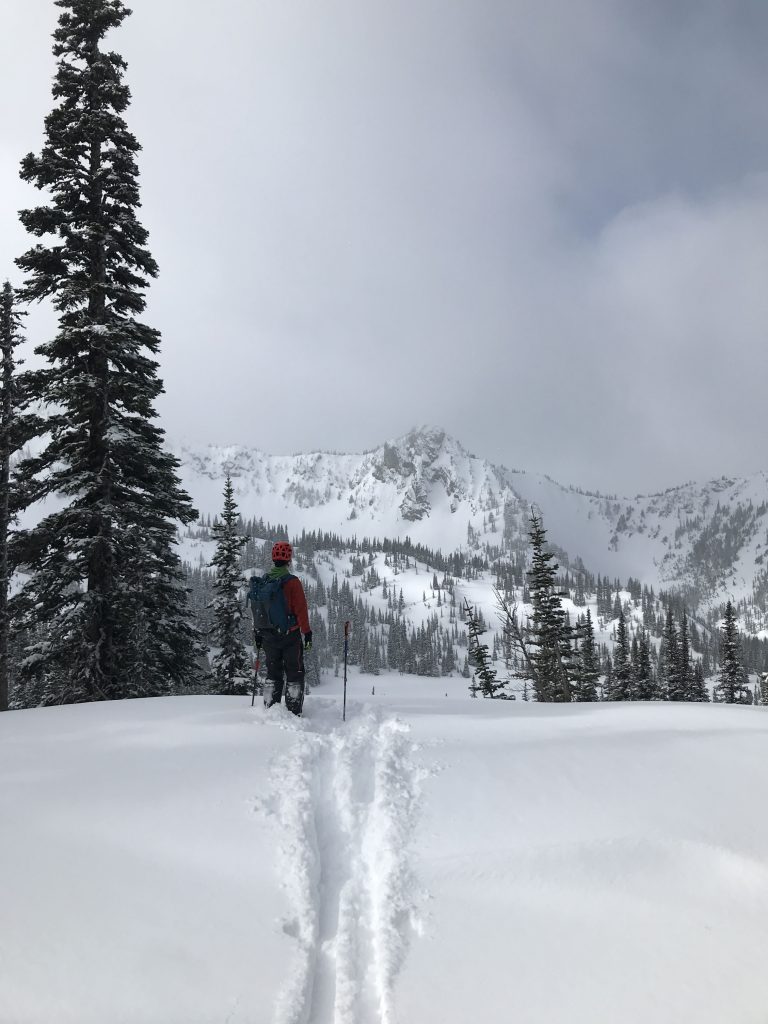 Once we reached Crystal Lake we changed our plan and began to head up towards Crystal Peak, instead of Chinook Peak (for the Sheep Lake Couloir). Initially we planned to ski an unnamed couloir off Peak 6706' first, but when we saw a group of skiers using the skin track we had cut, creeping up on our tails, we changed plans and went for the G-String Couloir first. The G-String Couloir is a constriction on the N slopes of Crystal Peak, towards skier's right. The upper slopes of Crystal Peak are a nice open bowl; around 500' down there is a fork...to the right is the G-String Couloir, to the left is the Shoestring Couloir. We had a bit of a tough time entering the upper bowl because of massive cornices off the summit, so we had to ski down 100' or so along the ridge to find an entrance. We paused above the choke and I took the run first, radioing back to KJ once I was through. The choke wasn't that narrow, plenty wide for some easy turns. 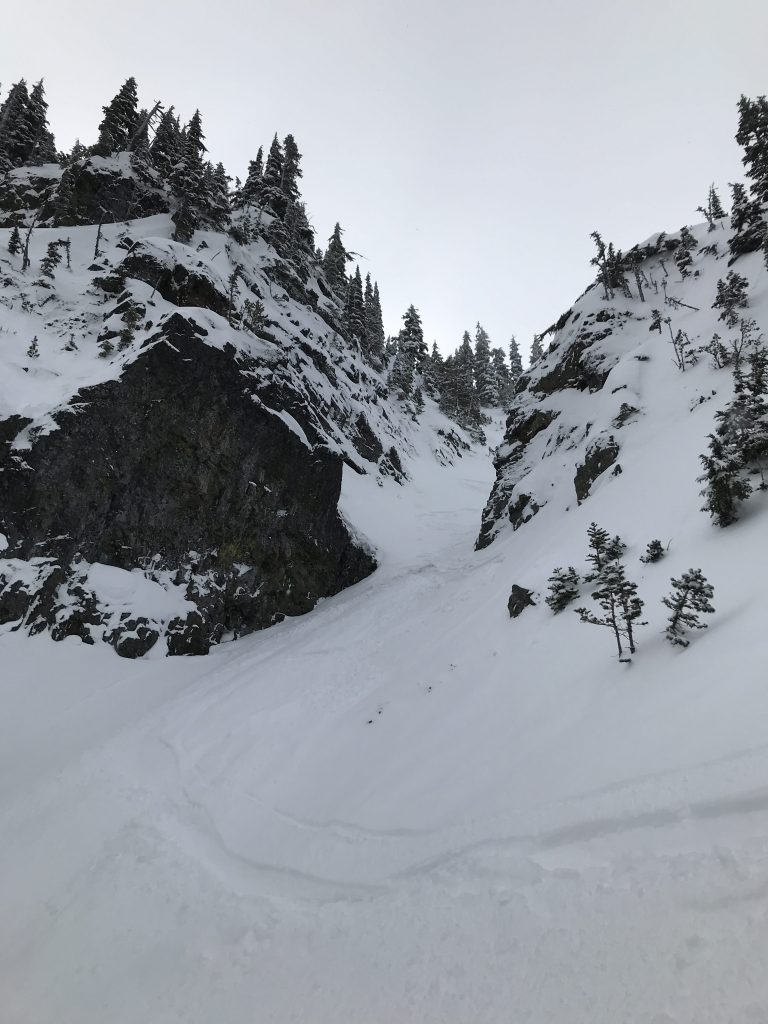 Looking back at the choke...I was the first one through the couloir. KJ followed and we skied all the way down to 5,100' or so. We skinned back up towards Lower Crystal Lake, where we were able to pick up a skin track from another party that led us back to the bowl we had come up initially. We headed up towards Peak 6706' for the unnamed couloir that winds to the NW and then back N. A party had skied it before us, so there was some sluff that had accumulated in some spots, but once we were back on the apron it was quite good. After that run, we skinned back up to Threeway Peak and skied out the resort back to our car. 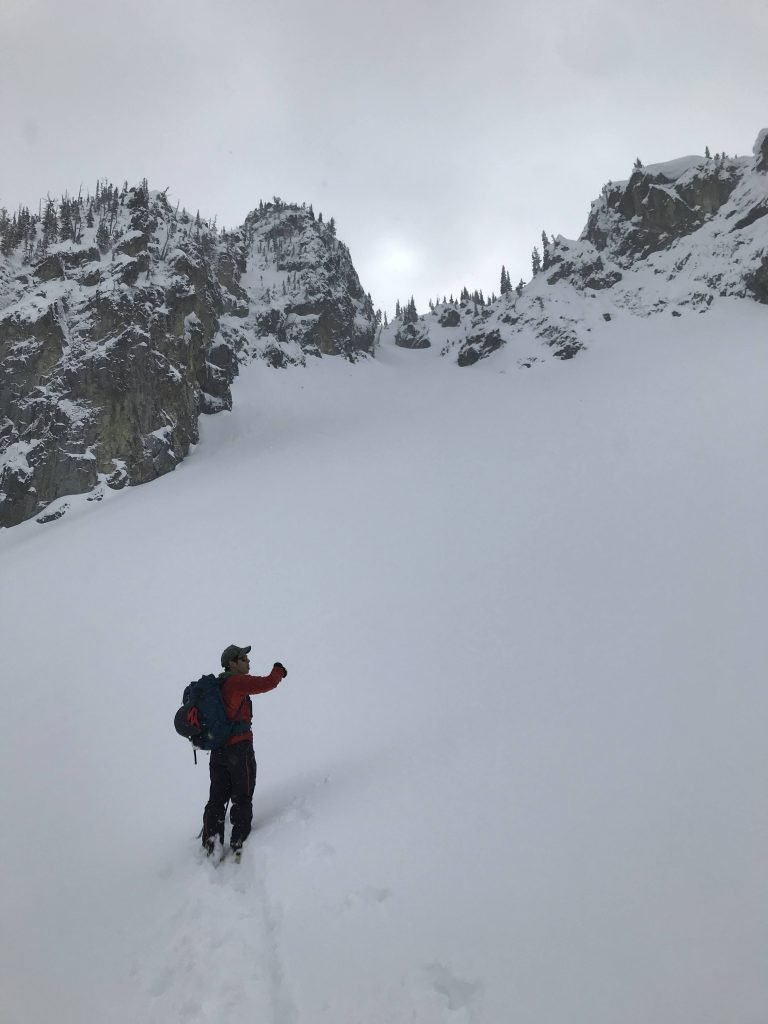 The unnamed couloir above KJ...it's a short one.