Anthony and Tanya headed up the Muir Snowfield starting at 2 AM, while Noah and I offset our starting time to 3:30 AM. Our planned ascent route was up the Ingraham Direct to the summit, since we knew it was "cruiser" and easy travel. We knew that climbing up the Finger had advantages in terms of seeing the route you'd ski...but we didn't like the idea of being in rockfall hazard for such a long period of time. The refreeze overnight was quite good and the snow even down to Paradise was firm. Panorama Point had melted out pretty significantly, now dry at the top; other than that, the travel to Muir was cruiser. Noah and I managed 2 hours 40 minutes to Muir, where we met Anthony and Tanya who were fueling with food and water. 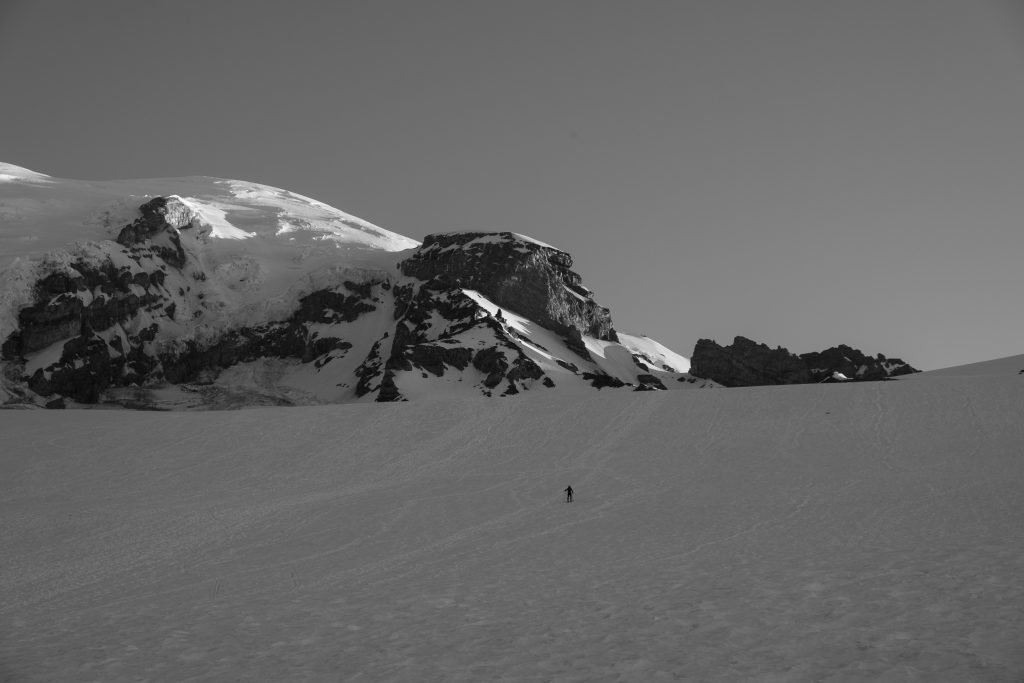 Noah slogging up the Muir Snowfield in the morning light. We roped up and threw on crampons at Muir. The sun was out and it was pretty blazing hot...there was minimal wind to help with keeping it cool. We saw at least 25 people (mostly guided groups) descending the ID on our way up; one group got hit with a rock that had shed from Gib Rock. The route had been moved pretty far climber's left towards Gib Rock to avoid a large (~D3) serac fall that had occurred a few days prior. 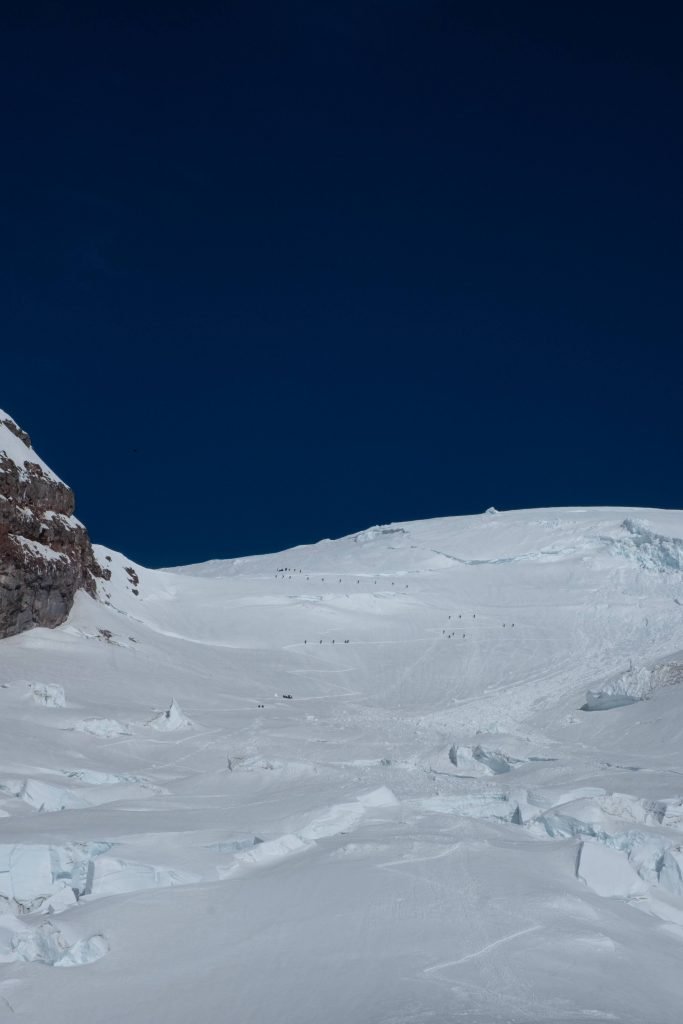 Looking up at guided parties descending the ID, which trends to climber's left near Gib Rock. 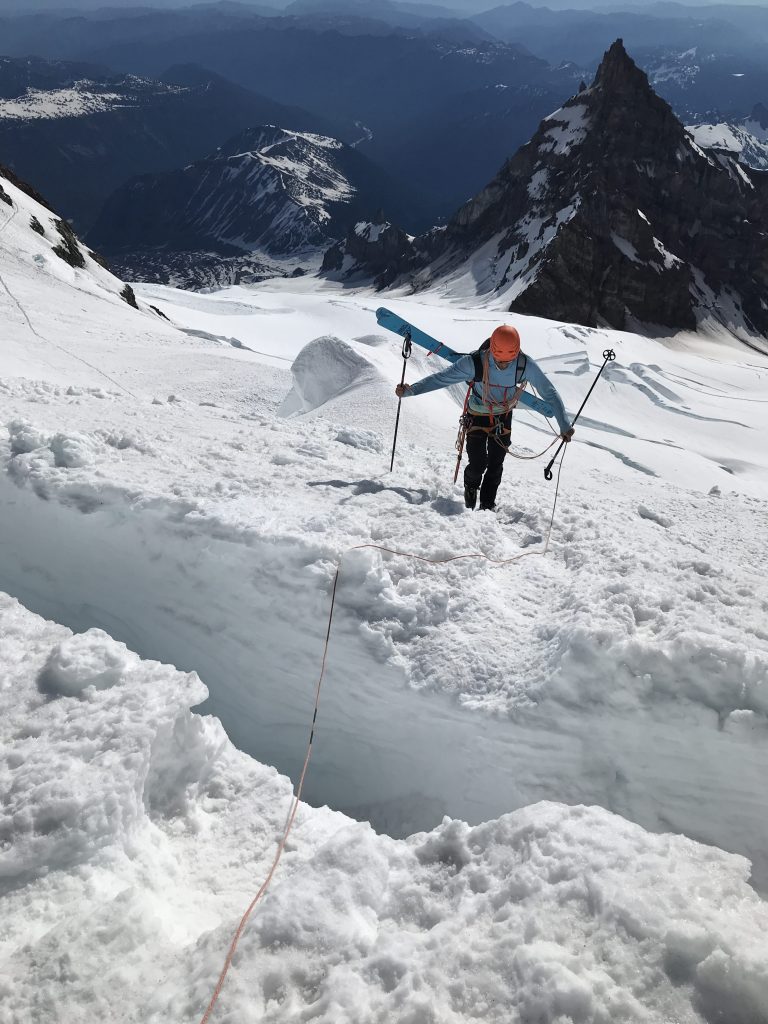 Noah about to step over one of the larger crevasses on the route. Overall, the climb up was hot and sweaty but pretty cruiser. Noah and I topped out on the summit crater in 7 hours 45 minutes; we headed over to the summit to take a nap and wait for Tanya and Anthony. Oh...and it was Noah's birthday?!!? What a way to spend a birthday! Tanya and Anthony arrived about an hour behind us and we took a quick break at the summit before transitioning to skis for our descent. We had agreed on a 1-2 PM descent time for 'corn-o-clock', and we ended up dropping just before 1 PM. 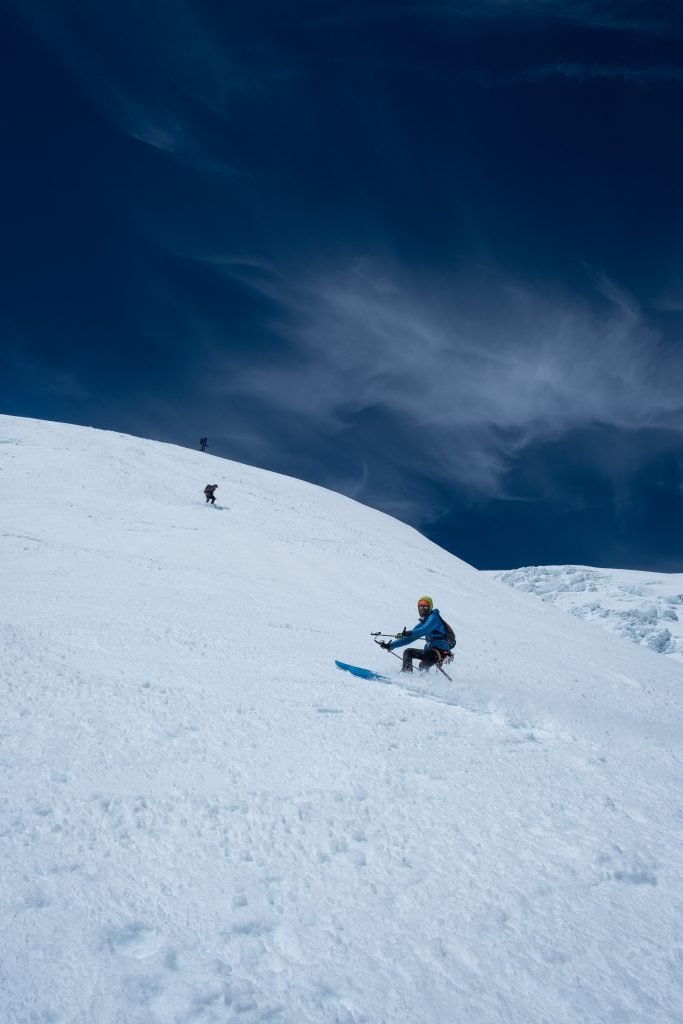 Party ski on the Upper Nisqually. The upper Nisqually was still firm but not icy and still pleasant to ski. We took the first 1,000' slowly to routefind, as skiing off the summit can be quite disorienting. 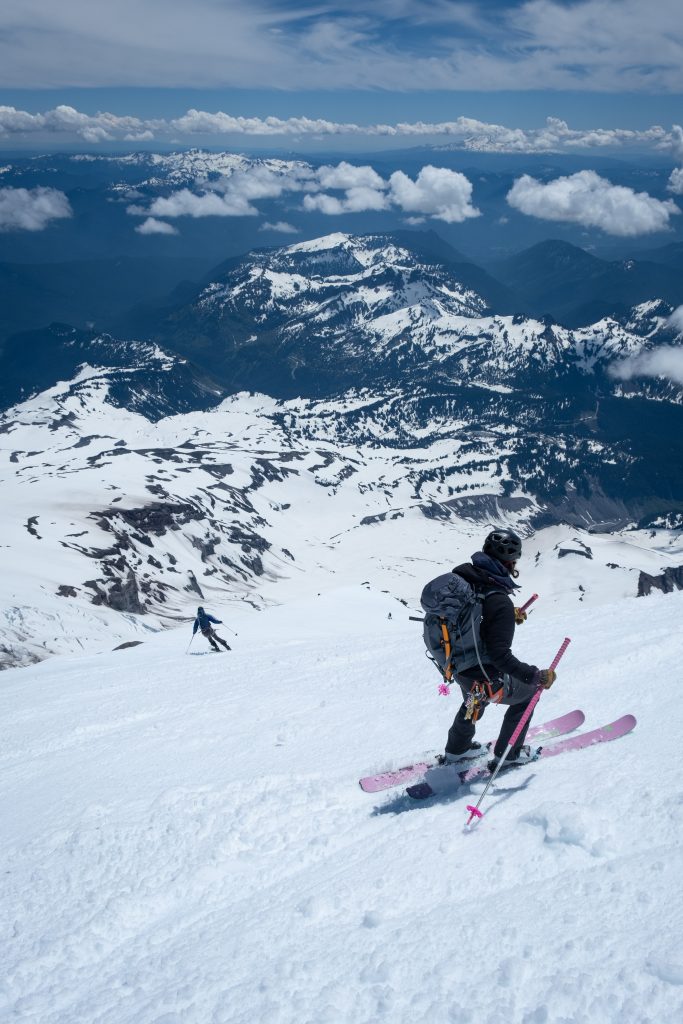 Tanya and Anthony descending on the Wapowety Cleaver. I had been looking up at the route on the climb up and noticed it looked less "crevasse-y" to stick skier's right towards the Wapowety Cleaver, instead of zigging and zagging through the Upper Nisqually. 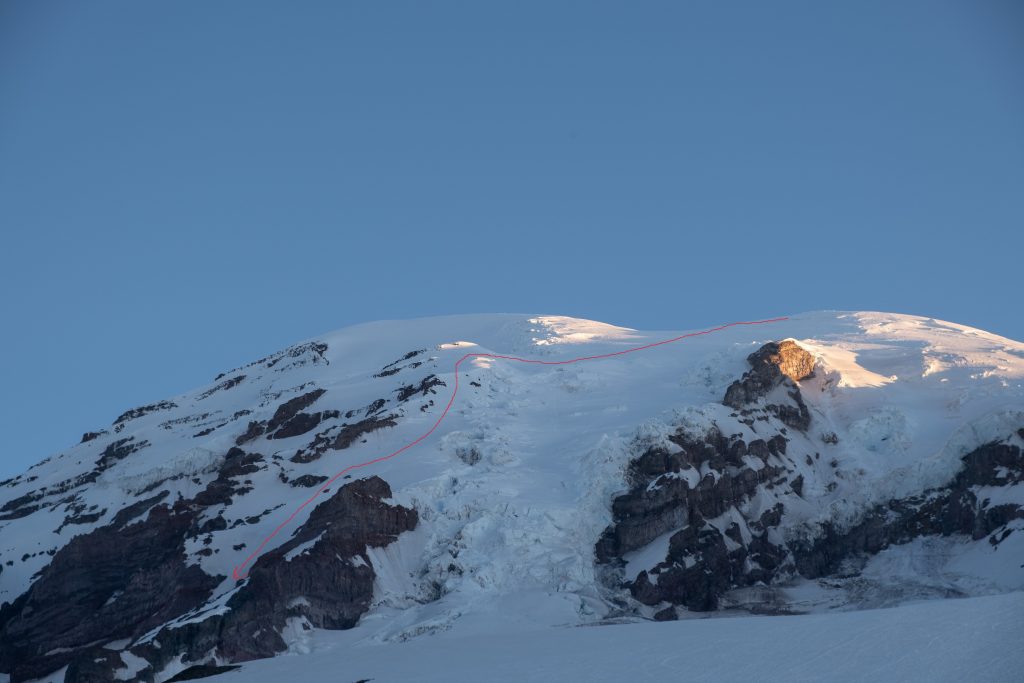 There was one steep roll-over that might have a bergschrund at the bottom of it, but it seemed manageable from afar. 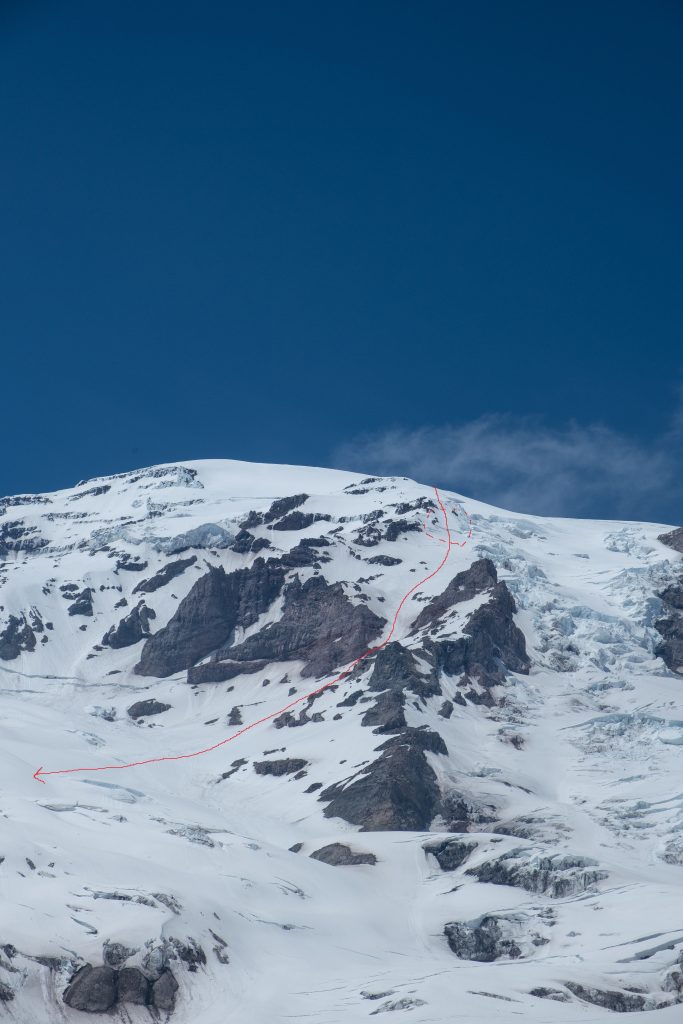 The 'schrund' circled, with the route outlined in red. We started to find corn as we gained the Wapowety Cleaver around 13,000'. I found the roll, which probably was around 50 degrees; we couldn't quite see if there was a schrund', but it certainly led us to the top of the "finger." We could see ski tracks through the Nisqually, so it seemed more people had opted to crevasse dodge instead of ski the steeper roll. Anthony led us first on the steeper roll and found that there was indeed a LARGE bergschrund at the bottom...oops! It was still huckable but definitely not without a gulp in your throat. I went last so I could take pictures of everyone sending, which was pretty fun to watch! 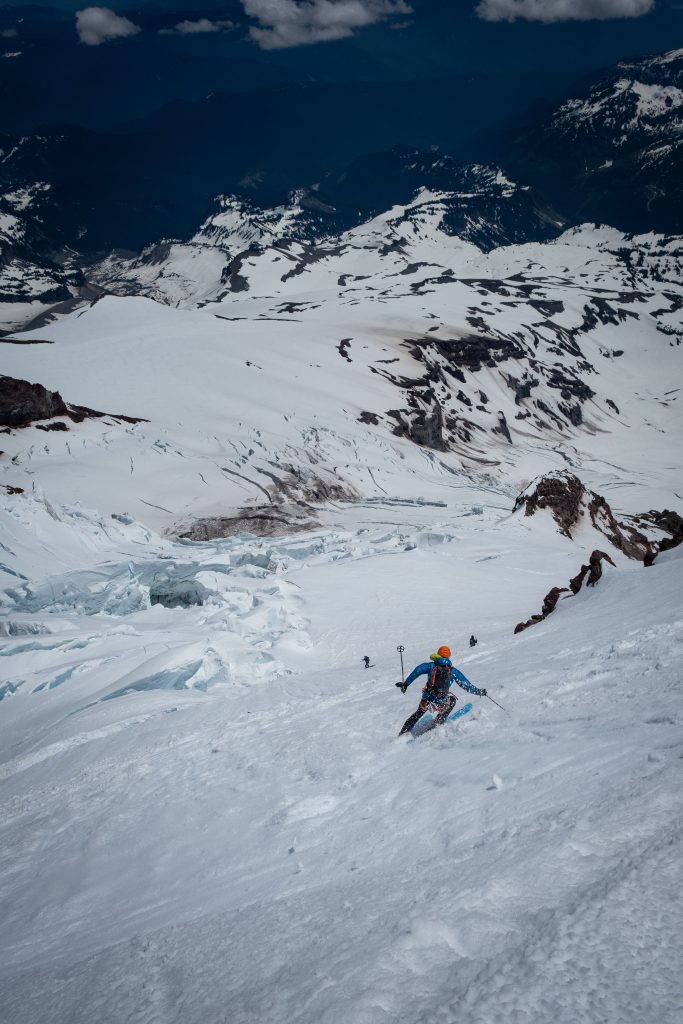 Noah heading down the roll towards the 'schrund. You can see Anthony and Tanya below, near the 'schrund. Once we were past the 'schrund, it was sending time! I told everyone that once we were in the "finger" we'd need to be heads up and minimize "stopping" time because of overhead rockfall. We all skied pretty continuously down to the Wilson Glacier. The snow was pretty good, a softer corn that was slightly overripe, but still pretty sendy. No 'schrunds to report on the finger itself, though we could see a big one at the bottom of the Fuhrer "Thumb" that might have been possible to skirt around. 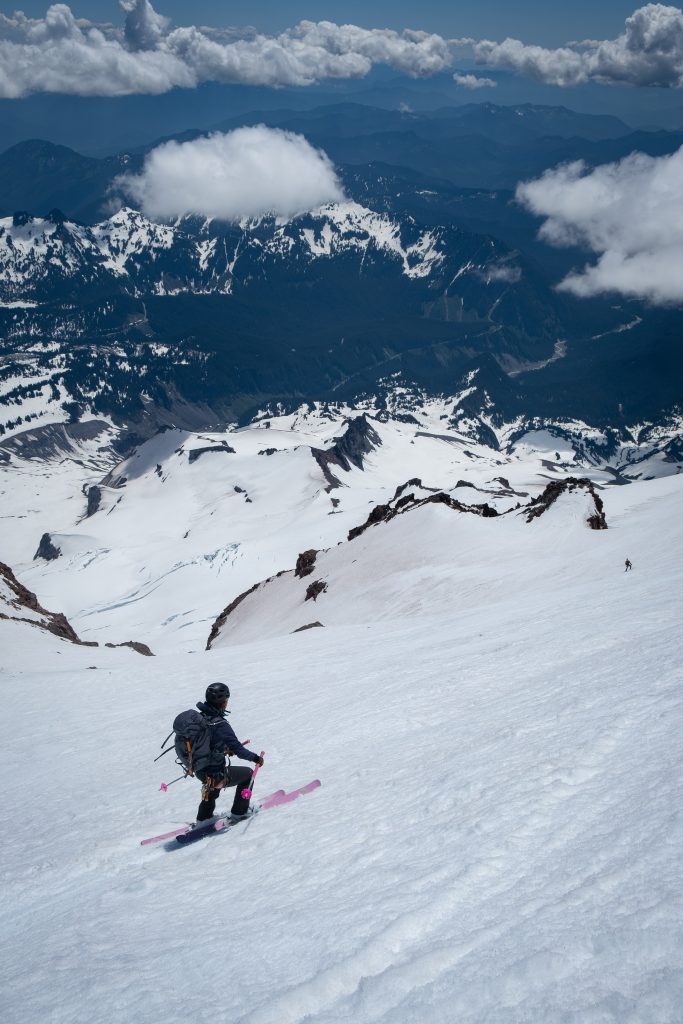 Tanya skiing down towards the "finger" chute. From the Wilson Glacier, we followed tracks down to the base of the Turtle and then traversed over to the lower Nisqually, where we threw on skins for a quick climb back up to Glacier Vista. Then skiing back down the car and drinks to celebrate! Overall, a great day with minimal shenanigans. 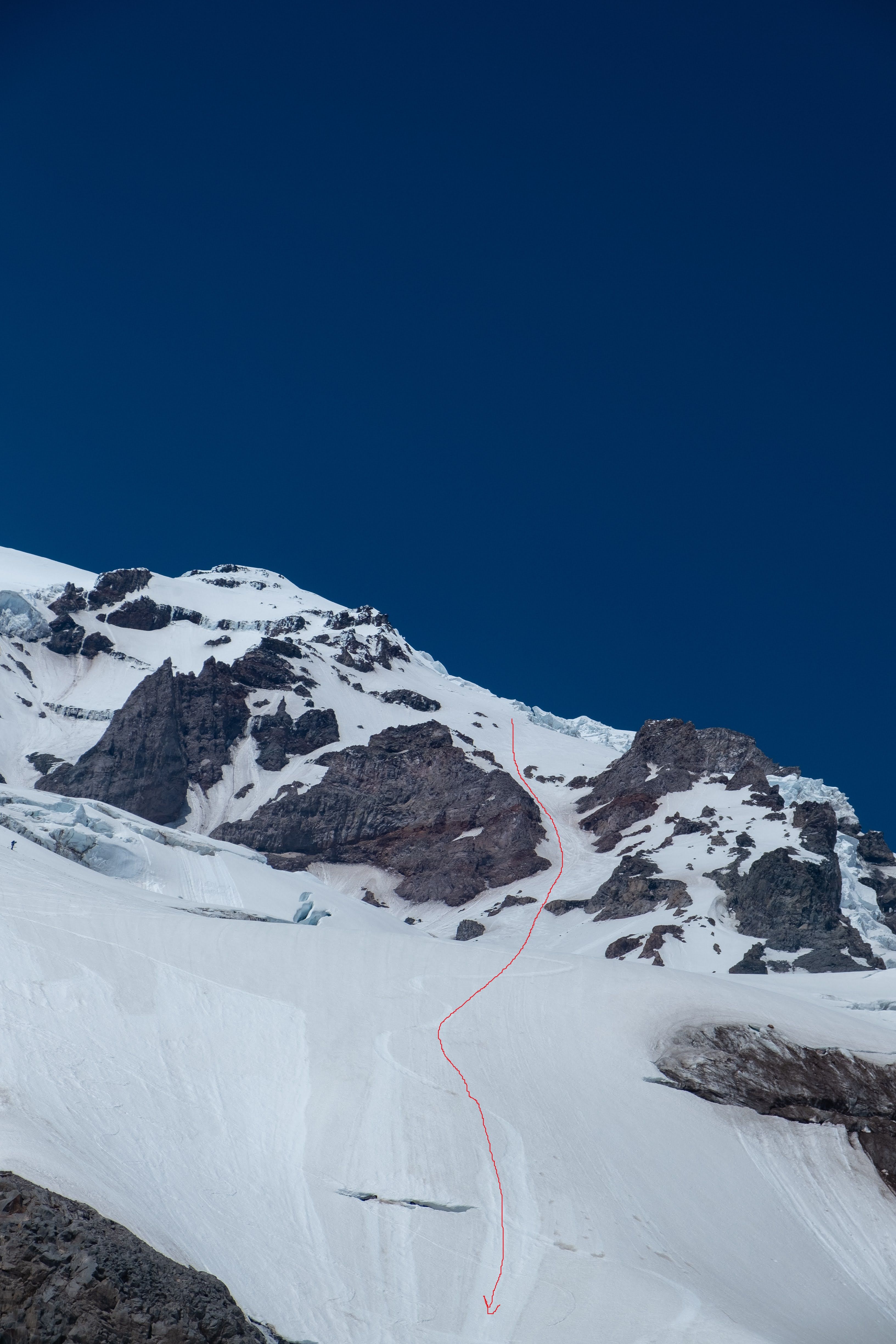 Looking back up at the line, for info on crevasses, etc.

Congrats on the summit and ski to you and your party.