For clarification purposes, this is the same Stügie/Stugie as previous - just locked out and finally decided to throw up a post after a few silent years as well as get a new login.

Day 1: Early into the “playfields”.  Can’t ask for much when it comes to August, September, and sometimes early October turns.  Soloed for a couple days and camped at climbers bivy.  Climbed Observation and skied a nice run down the center of the headwall and a couple small runs on nearby snowfields the first day.  I was pleasantly surprised that the sun cups were very small still on the Flett headwall.  That being said, it was still chattery and bumpy at 5pm.  Probably one of the last few days for getting the headwall before it gets too out of commission.  Everything else was buttery though, unlike the Muir Mortar Field.

Day 2: Got more runs in, but only on the main “playfields”.  Beautiful night catching glimpses of the fading Perseid meteor shower.  Stayed to enjoy camp a bit and then headed out.  Not a soul in sight on the big day, saw and passed a few snow seekers on my way out the next day.

Had a visitor during the night, but can’t place the tracks - about 3.5-4” across, 1.5-2 ft. between tracks.  Five toes present and earlier in the day (when I SHOULD have taken a pic) you could make out claw marks.  Ruled out bear because no hind foot markings and the walking pattern was not right.

*Edit: After going over photos of tracks, despite that fifth toe, I’m guessing cougar?  The pad was too small for anything else...

*Edit 2: Forgot to mention - the lower Russell looked okay, but Upon inspection from the crossover above Echo, upper Russell and the Headwall are out...at least for me they were. 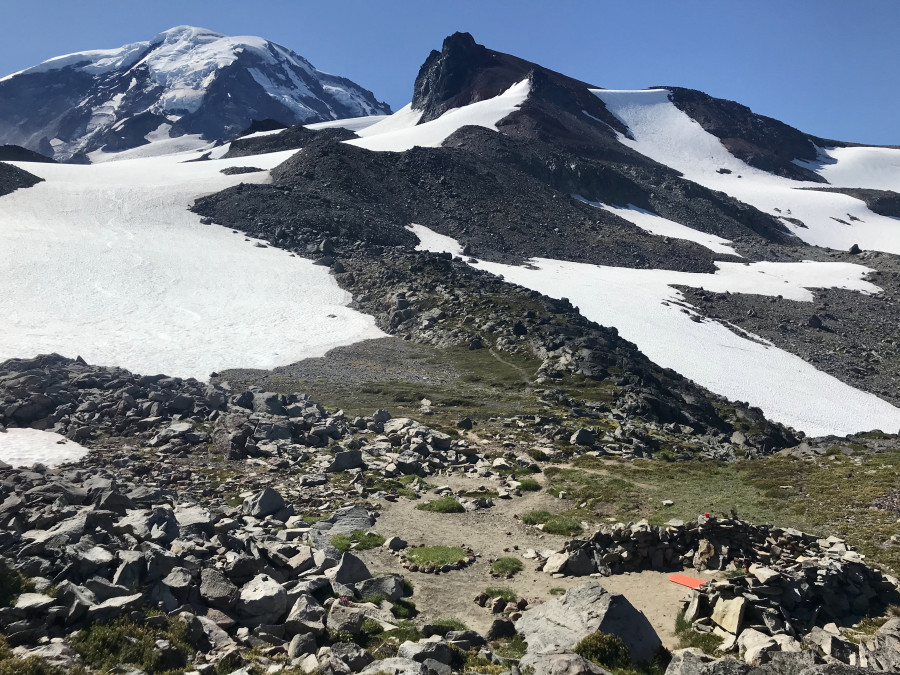 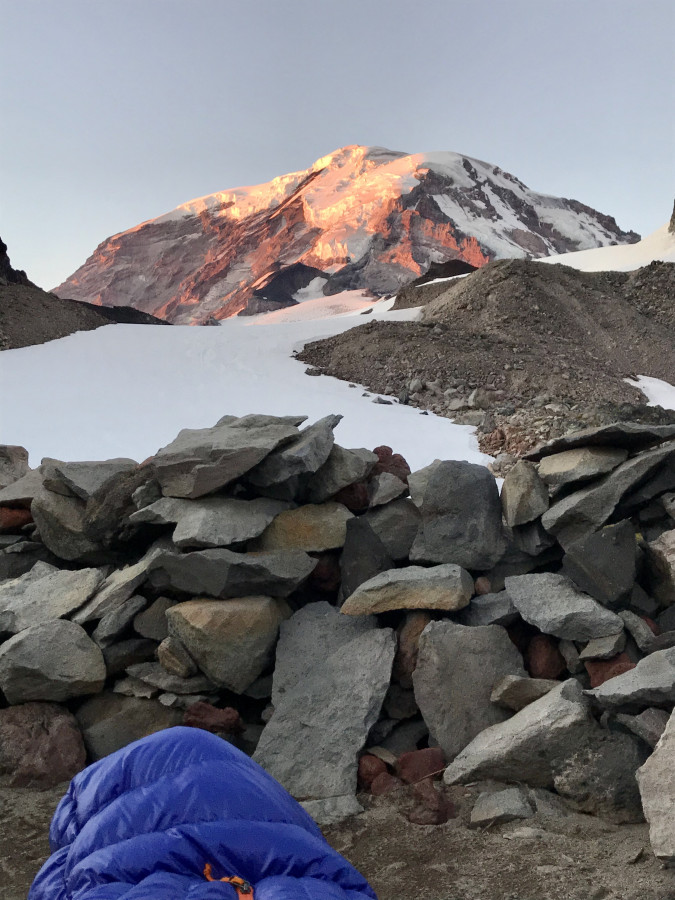 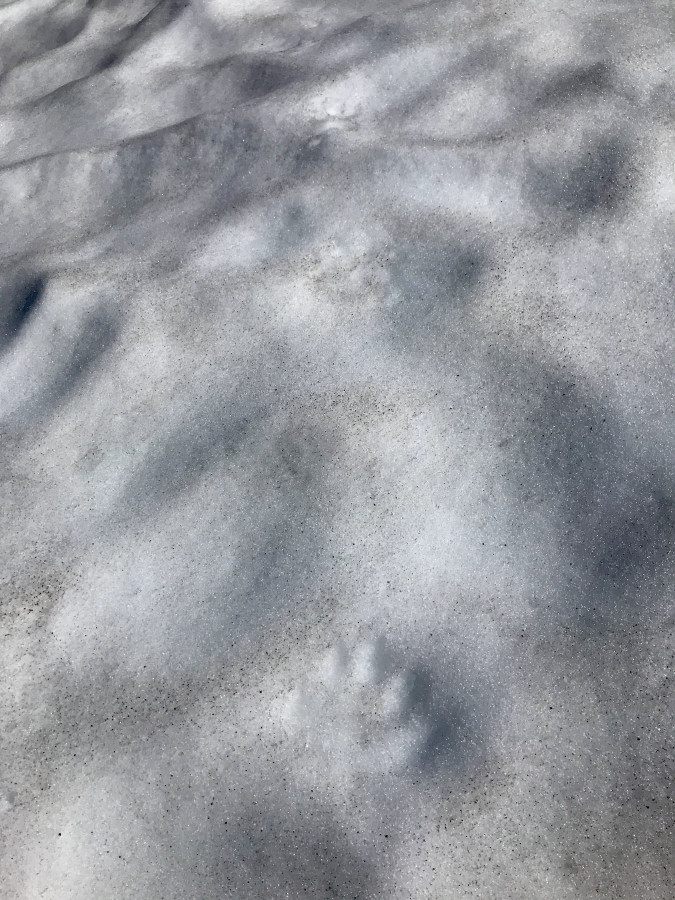 Good report, thanks and welcome back!

Your track photo looks more like wolf than cougar to me, or just maybe...

Just went hiking on the same day, I’m a fake tayer that normally skips July and August (; Camping up there definitely seems the way to go for skiing purposes.

You forgot to mention the trailhead madness, looks like cars parked beyond the first hairpin on our way home. 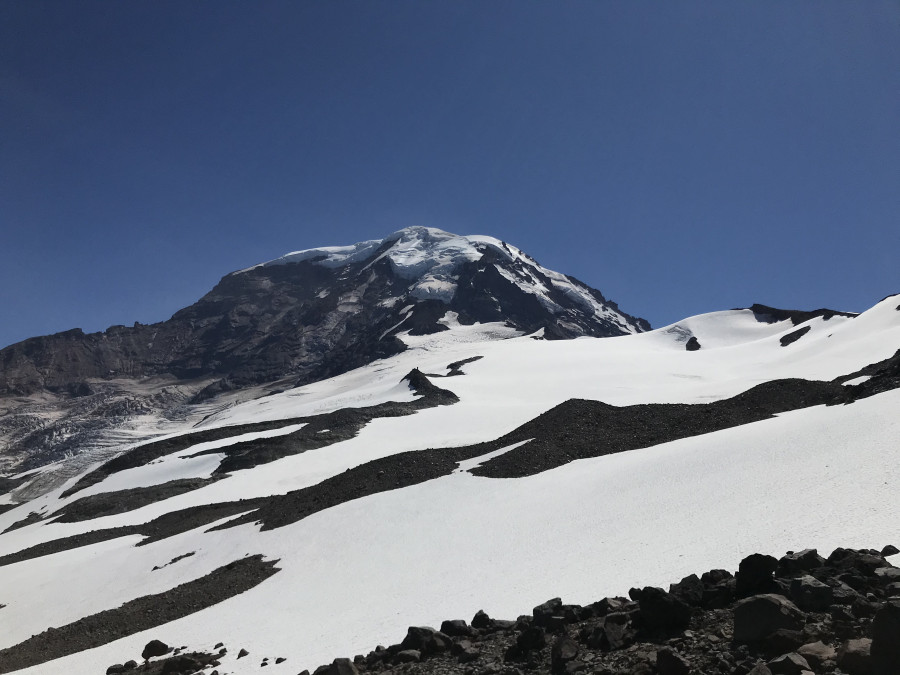 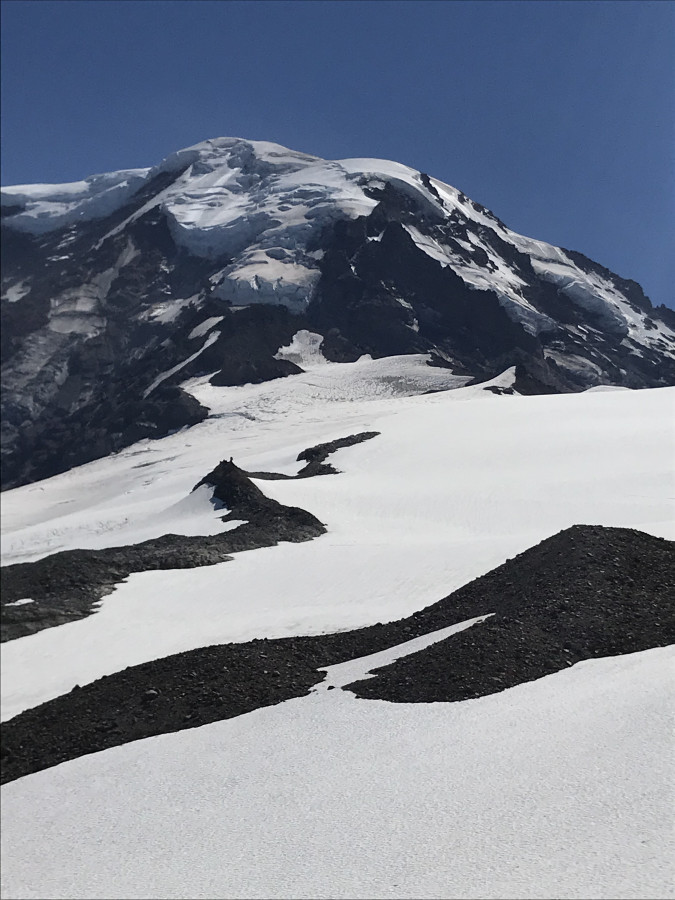 Vogtski - Thanks, and good intel.  I wasn’t convinced it was a feline or canine due to the five prominent toes showing, as well as claw marks I had seen passing the tracks on the way up (I’m still kicking myself for letting the sun deteriorate the tracks before I bothered with the camera!)

After looking at more wolverine tracks, I’m crossing my fingers...badger was my other guess.

Hood - Great shots of the Russell!  It looked more cupped and dirty above 7500’...did you go up to the Headwall?  I watched a pretty good size avalanche off the Liberty Cap Glacier around 3:30p from Observation Rock.  Few other skiers and snowboarders up there on Friday...watched some sketchy descents down the Flett Headwall on Friday.   Sadly back at Mowich you are right on - parking, crowds, campsites, drones, trash - it was all out of control.  Definitely madness.

No didn't actually go on the glacier, was just lazing about and escaping the heat. Wish I had camped like you though and brought skis!

Yep people are parking over 1 mile down the road on weekends, After working and playing in northside of the park  for 35 years never seen a badger, did see what I figured was a fisher, but told by park ologist that I was mistaken. There were rumours of a pair wolverines near the ne part of park a couple years ago.

Apparently, according to the park’s website, CNN, NPR, MSNBC, and USAToday - Wolverines have returned to Mt. Rainier National Park for the first time in 100 years...

Maybe that guess was not as far off...*shudder*

Technically, the park is claiming only the first breeding female in over a hundred years.  I'm sure there have been other sighting reports besides mine driving down from Paradise in the late 70's.  As I entered the straightaway just below Glacier Bridge, a wolverine crossed the road with its odd gait and cleared the 5' vertical plow berm in a single bound toward the river.

Recent reports from Chinook Pass and Goat Rocks may be those referenced in the press release:
https://www.conservationnw.org/our-work/wildlife/wolverine/

These are wide-ranging animals, even on the beach in Pacific County, WA:
https://tdn.com/news/local/once-in-a-lifetime-wolverine-spotted-twice-in-pacific-county/article_e49e4516-0c4a-5cb5-a060-53c058936a45.html

Looks like they've been wandering around Oregon for decades:
https://myodfw.com/wildlife-viewing/species/wolverine

Even the Tahoe area years ago:
https://www.sfgate.com/bayarea/article/first-wolverine-in-94-years-sierra-nevada-13578269.php

“ Technically, the park is claiming only the first breeding female in over a hundred years.  I'm sure there have been other sighting reports besides mine driving down from Paradise in the late 70's.  As I entered the straightaway just below Glacier Bridge, a wolverine crossed the road with its odd gait and cleared the 5' vertical plow berm in a single bound toward the river.”

That is downright badass.  Damn.