I wanted to get some good miles in today so I decided to go for Chinook Pass from Crystal.

I was hoping the overcast day would limit the solar effect and allow for efficient travel, but the sun was out more than expected and softened the snow considerably. I went out east of the crest and back on the west side to hit some appealing north-facing descents on the way back.

I started skinning at 8:30am and went up the Silver Creek Trail to stay out of the resort. I intended to hit the saddle just east of Three Way Peak, but ended up following a skin track to the next high point to the east. This turned out well as there was a nice open descent from here down into the next basin. Next I skinned up to Sourdough Gap and skied down to Sheep Lake.

I had to boot a few hundred yards at the lake as my skis were not fast enough on the soft snow to make it across the flats. After I descended from the lake I didn’t see any tracks or people until I reached the ridge above Crystal Basin on the way back.

Getting down to Hwy 410 from the lake was challenging due to the steep cut above the road, but I was able to scout my way down with a bit of traversing. There was a fairly recently looking avalanche (D2-D3) that ran over the road just east of the pass. Traveling up the highway was more challenging than expected due to snow drifts creating an undulating surface and old avalanches wiping out the road cut in places.

To add to the remoteness, I encountered a mountain goat as I was heading up the highway that scrambled up the hillside upon seeing me. He struggled to climb up the soft snow and ended up sliding part way down, sending a small slide down to me. He seemed frightened and surprised to see me.

I started my way back heading over the saddle north of Yakima Peak and traversing under the southwest face of Deadwood Peak. The next climb up to the ridge west of Deadwood Peak was the hardest of the day. This south facing slope was quite soft by now (~2:30pm) and I kept on slipping. I ended up having to double step to create compact snow underfoot, which slowed me down and required more effort.

I skied down to Deadwood Lakes via a couloir just west of Deadwood Peak. This descent made the last climb worth it, as the snow was still well consolidated on this north aspect and skied great. I didn’t spend much time in this basin as the rest of the ridgeline was looming with cornices and it was approaching the warmest part of the day.

The next climb up to the ridge between Crystal and Chinook Peaks was more moderate and made for quicker travel even on the soft snow. I dropped into Crystal Basin just west of Peak 6706. This snow held up well late in the day and made for a pleasant descent on tired legs.

From here I followed the skin track back through Crystal Basin and skied down through the empty resort. This is definitely a tour best for day with firm snow to allow more efficient travel. I ended with about 13.5 miles and 5,700ft of gain. 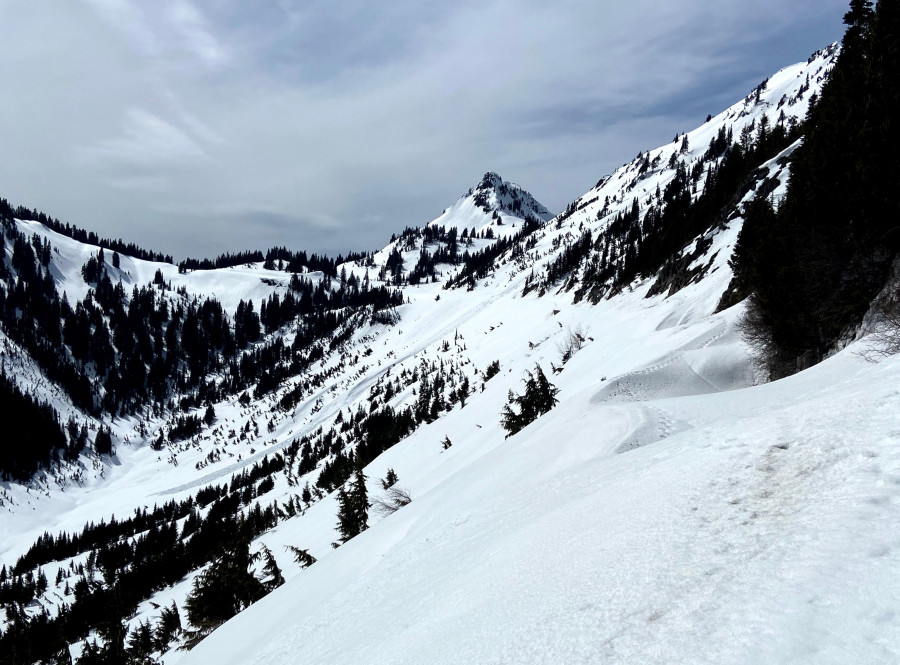 Looking up Hwy 410 to the pass with an avalanche running over the road. 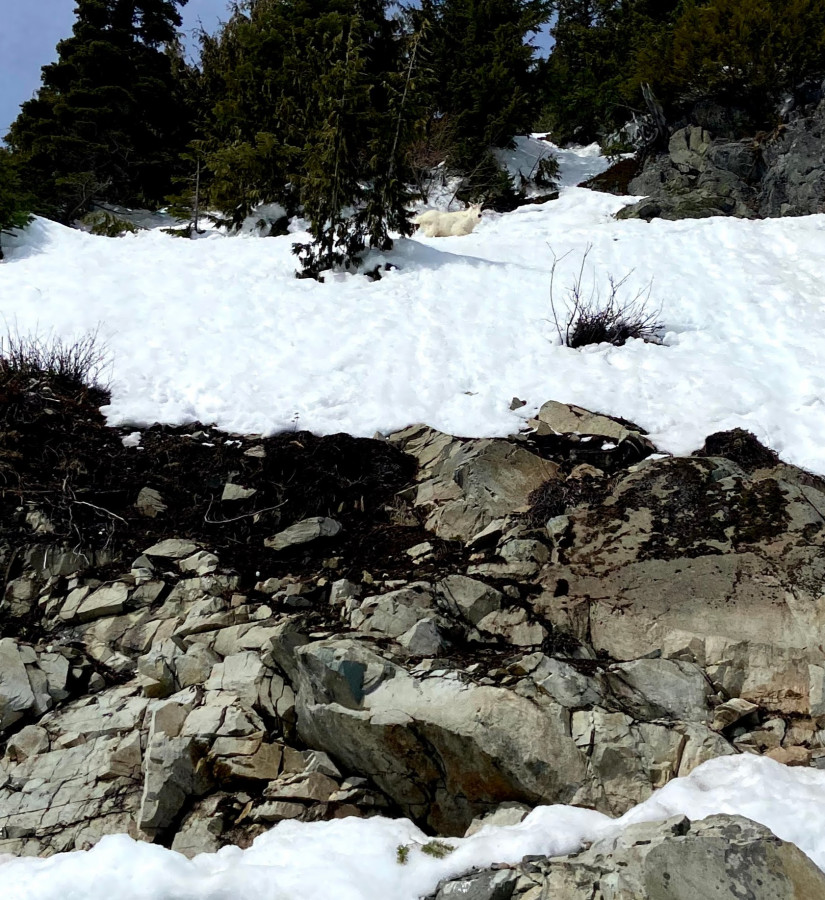 A mountain goat I scared up the hill. 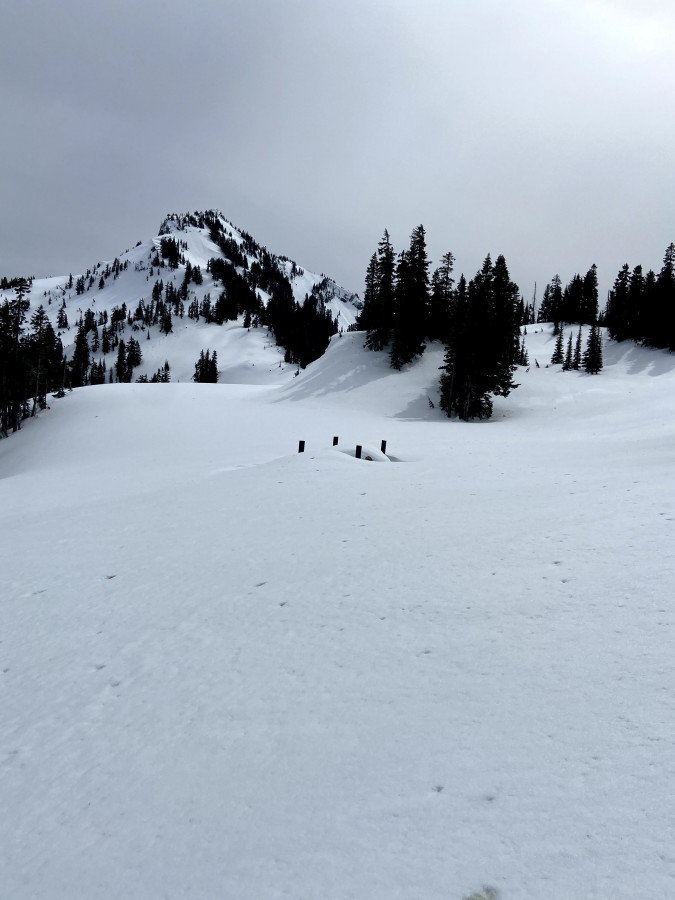 There is definitely still a lot of snow out there, as seen by this outhouse peeking out near the pass. 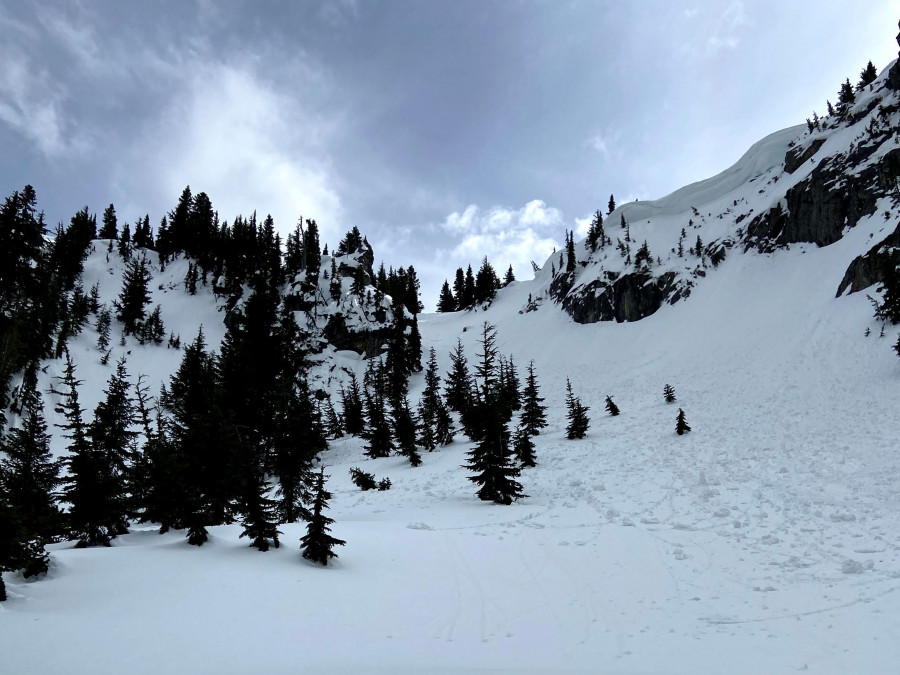 Descent from the ridge west of Deadwood Peak. 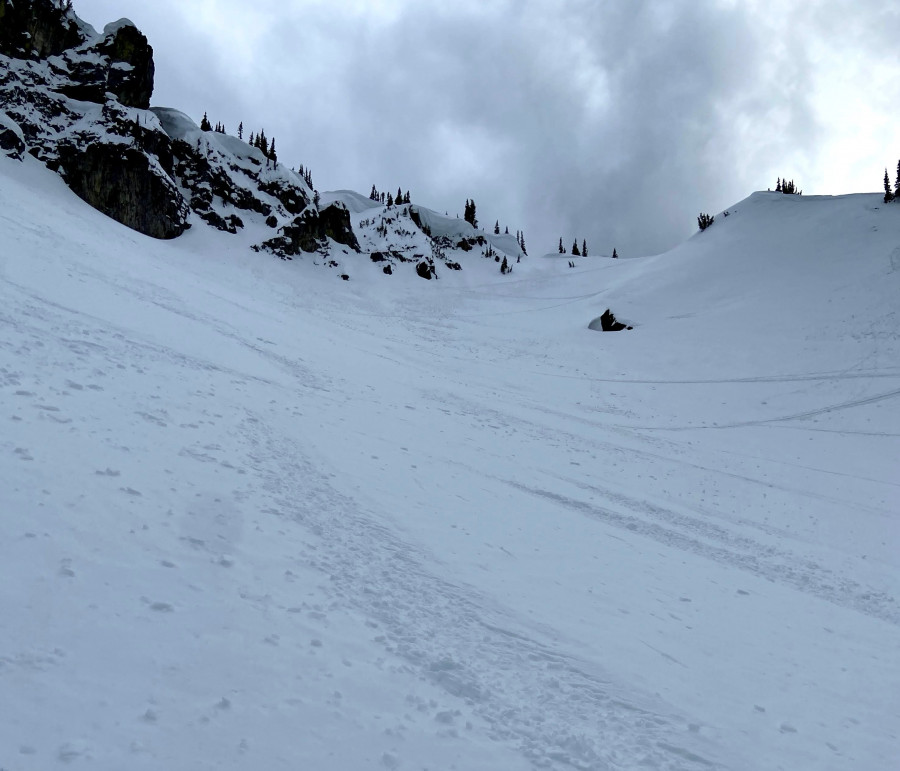 Descent from the ridge west of Peak 6706

Looks like a nice outing. Those are some big cornices. -Ben