Big Jim and Big Lou have long been on my list, so with the snow holding out and good weather this past week I thought I would give them a go in one long, long day.

I left the trailhead (2,800 ft) at 7:45am to quickly be eaten alive by mosquitos. Hatchery Creek road was in good shape, but AWD was useful on a couple very steep sections of loose gravel. The mosquitos went away after a mile or so up the trail. 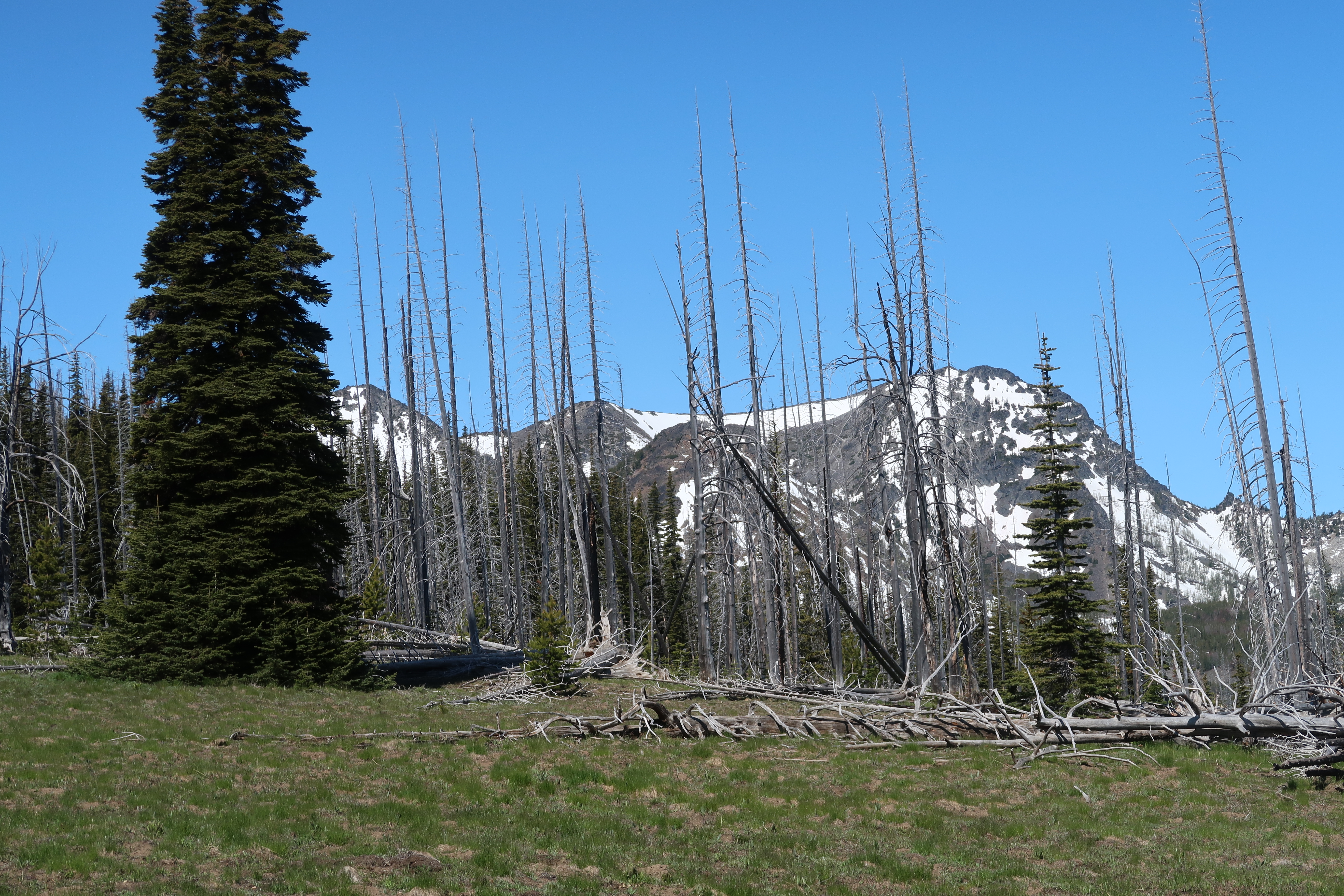 The first 4 miles of trail climb 3,200 ft through a burn area, with probably 40-50 blow downs blocking the trail. While these were not easy to clamber over with skis on my back, I got the hang of it after I learned how to fall softly. Sections of ankle-deep mud and flowing water also added to the fun. 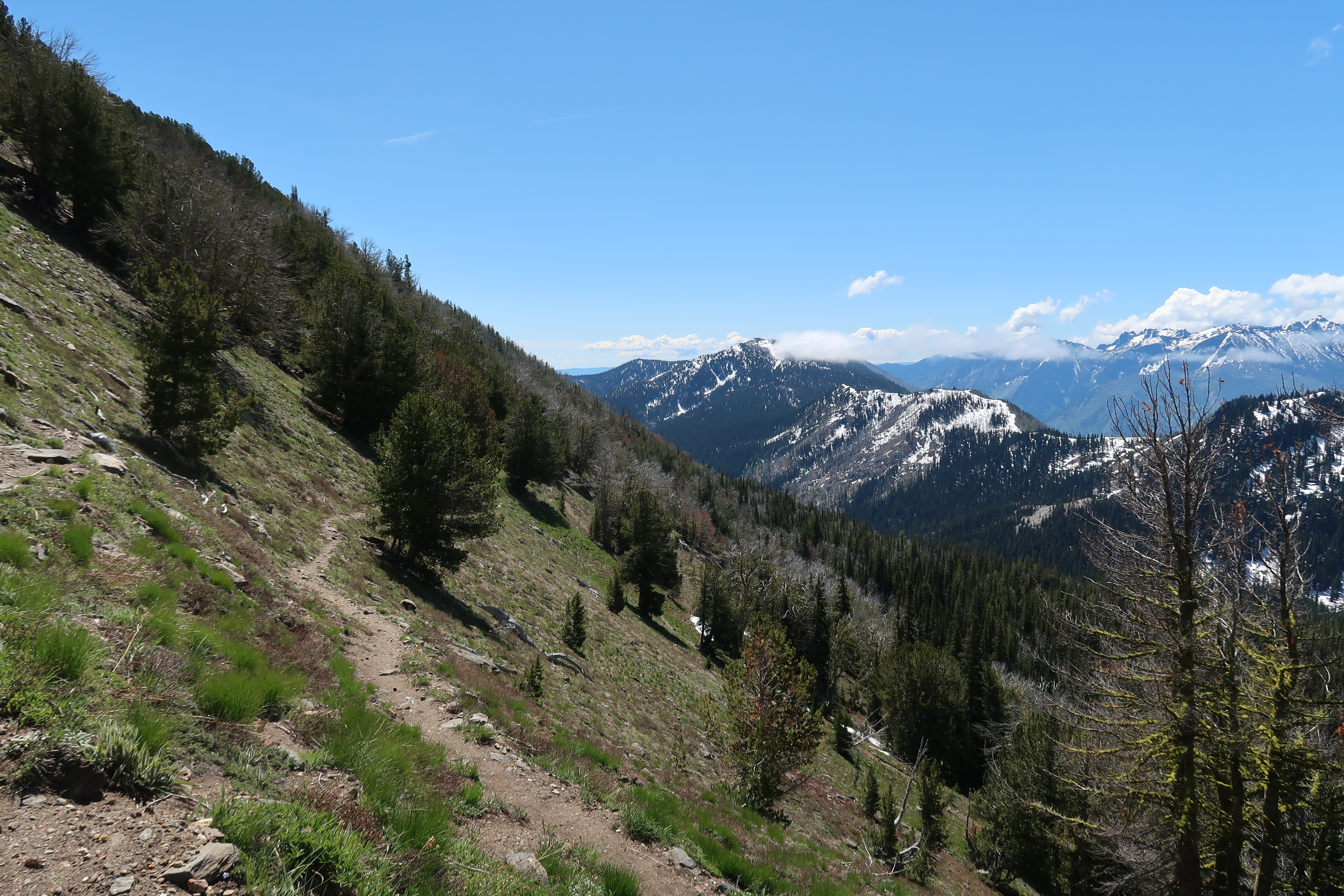 Snow began to cover the trail at 5.5 miles and 6,400 ft. The final ridge, which runs parallel to and NE of Cabin Creek, is reached at 6 miles and 6,700 ft. When the trail disappears shortly before reaching  the ridgeline, one can head due west up the exposed bare ground to avoid the steep snow. From the ridgeline, the trail switchbacks down towards the lake snow-free. 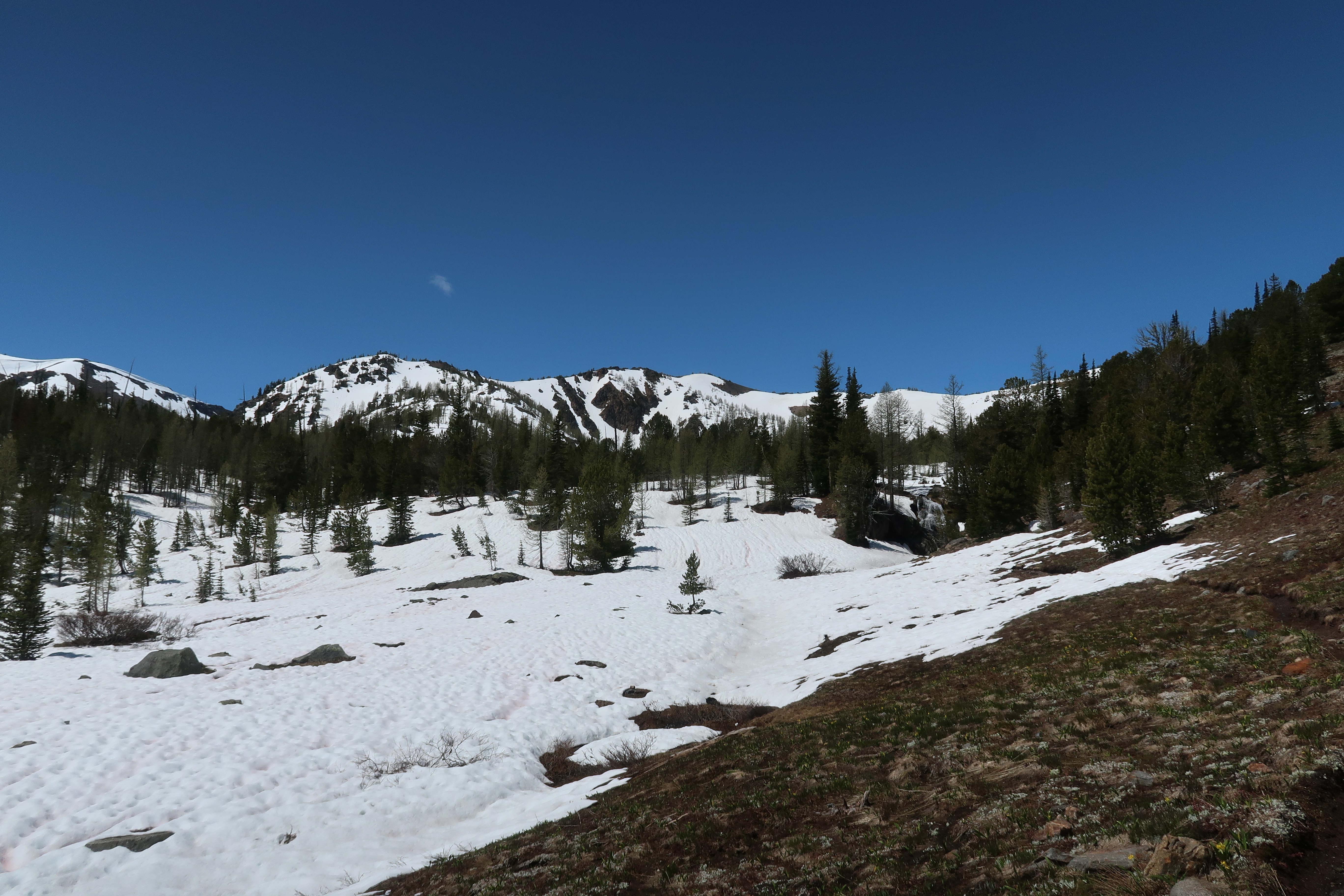 Roughly 0.5 miles from Lake Augusta, the snow returned at 6,400 ft. I opted to push forth and follow to the right of the creek before switching over to skis later at the lake after lunch. I arrived at the lake at noon, after 8 miles and 4,700 ft gain in total from the TH. 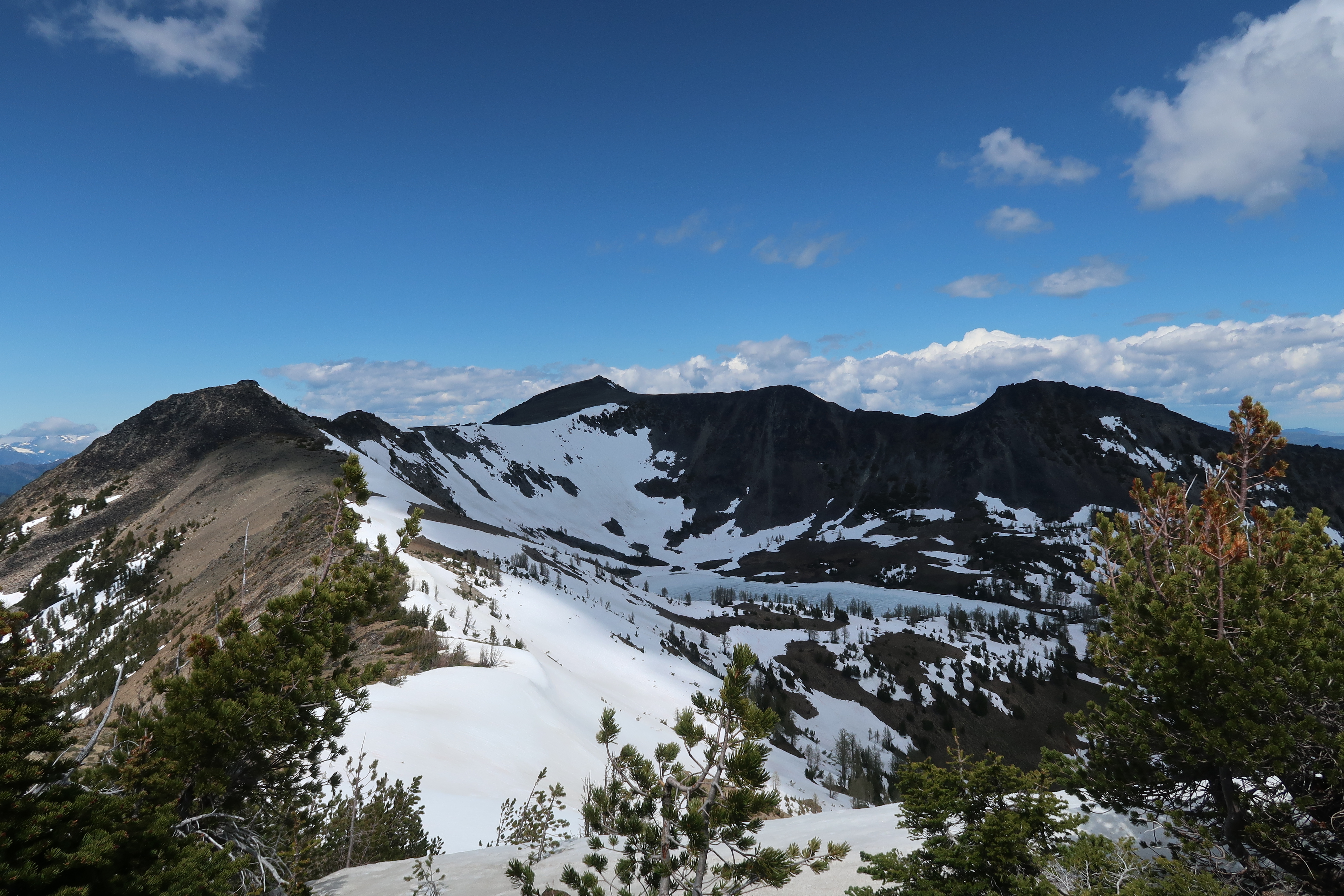 From the lake, I first headed towards the two summits of Big Lou. Skinning through the softening slop led me to the snow’s edge on the north peak, from which I made my first turns of the day halfway into the basin, then began booting up towards the south peak. I found a line with perfect runout to the east back down to the bottom of the basin and was able to skin back up to the lake to complete the loop in around two hours. 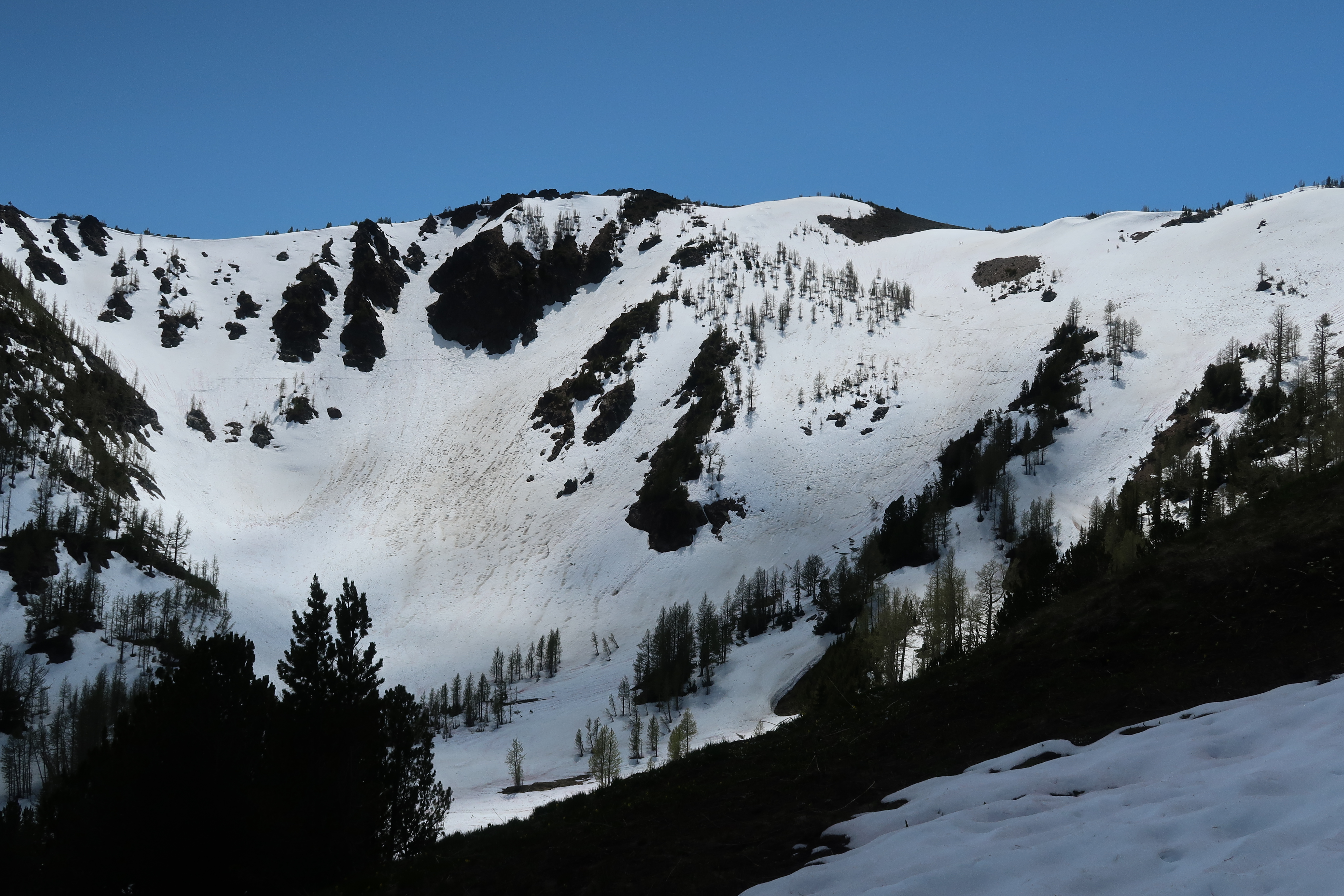 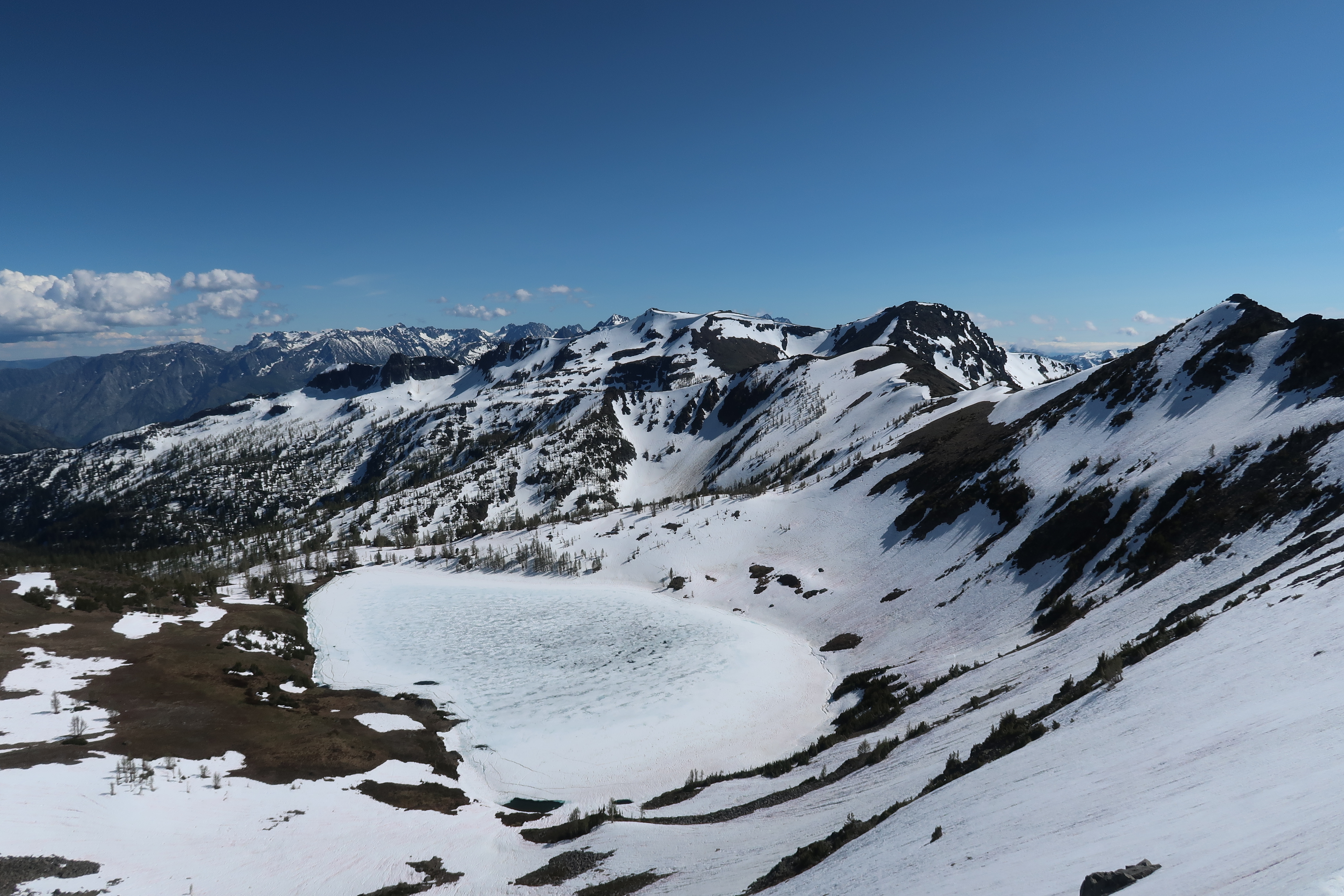 For the third and final run of the day, I climbed towards Big Lou again before cutting right and traversing around the west shore of the lake towards the slope below Big Jim. A few hundred feet of kicking steps in the 4pm slush led me to escape to a rather chossy scramble up to the Jim-Lou ridge. From there, I descended from the northern-most point of the cirque and returned back on the trail for the hike out around 5pm. 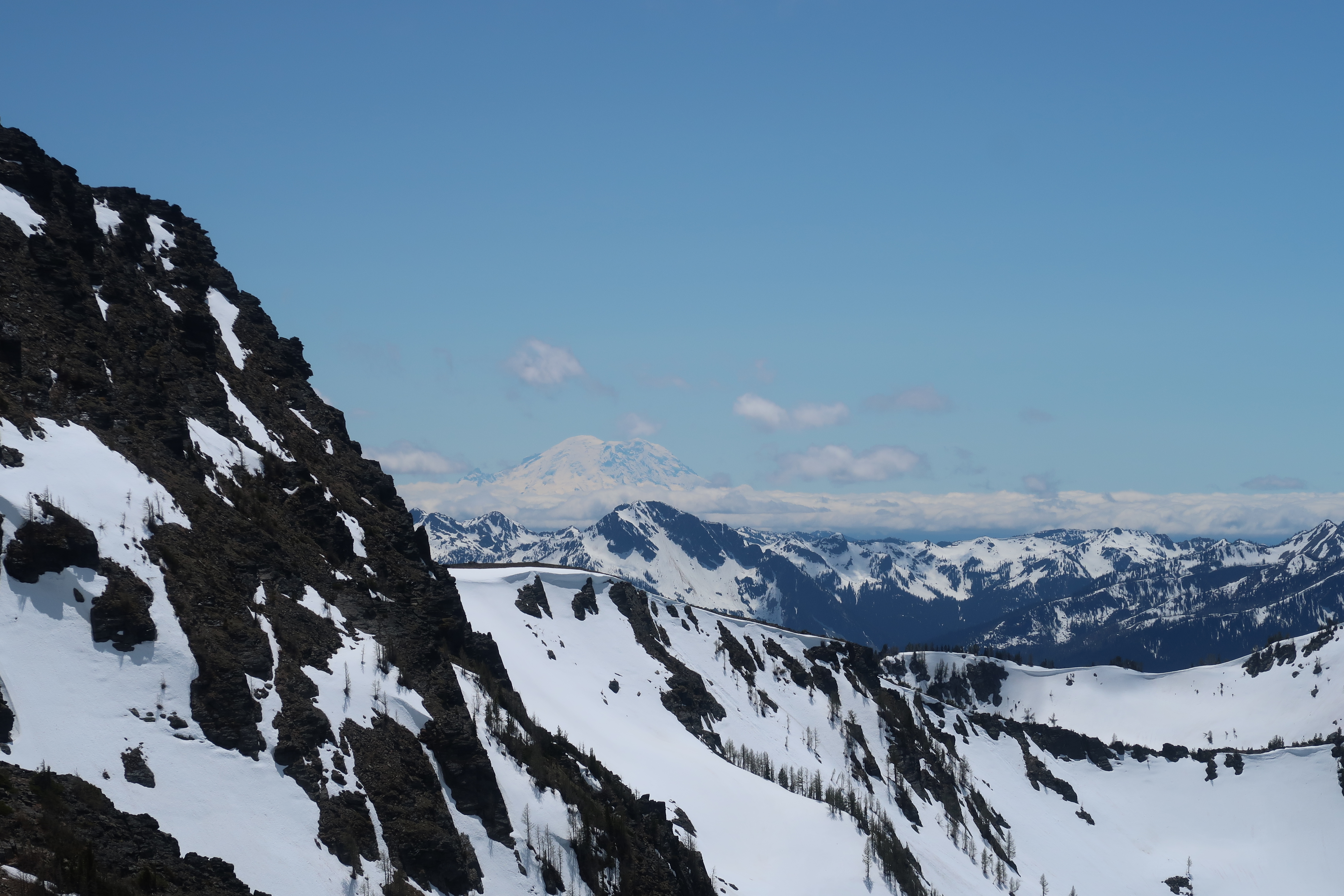 The skiable terrain along Icicle Ridge looked incredible – if only I could’ve stayed another day… total time round-trip of 13 hours, with 6,800 ft gain over 19.75 miles.

Very cool! Way to get the skis up there!