4/7/12
WA Snoqualmie Pass
3255
1
Posted by Jonn-E on 4/8/12 2:15pm
Met another TAYer on a last second whim to finally check off the circumnavigation box.  We went counterclockwise.

Optioned the NE-facing couloir down to Snow Lake, which was fun but had some debris in it.  The higher shoulder of chair peak was much more crowded with several large groups tracking it out completely.  Everything else was as you'd expect with a Bryant Col exit.

Anything south facing is getting blasted with radiation producing some good schmoo skiing in places, wet debris in others.  North facing is still cold, with shockingly good powder above 5k that was awesome on my surfy Drifters.  Wind was really whipping hard on the ridgetops, I think out of the east (hard to tell with all the wind channeling in that terrain) which was protecting some faces from excess radiation heating but was mobilizing ground snow enough to get some wind deposition.  Had one tiny 6" x 10' release on a steep wind loaded roll as a result.

Down in the valleys it was Hawaiian shirt time for sure.

I was surprised to come home to see the iPhone report that we only did 4600' vertical. My legs certainly thought it was more :).

For the curious, I've got a few more photos and thoughts on my blog. 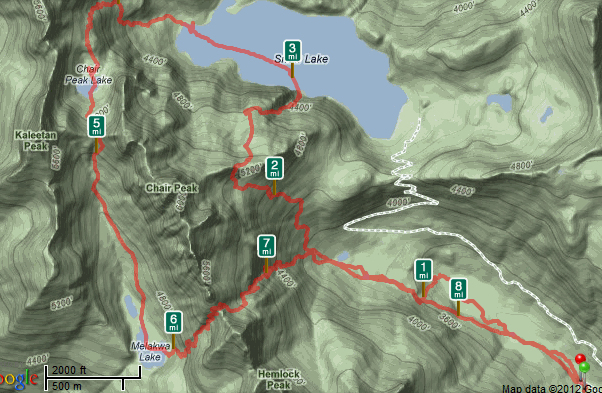