6/22/13
WA Cascades West Slopes South (Mt Rainier)
5474
3
Posted by garrettww on 6/23/13 4:34pm
Our group of four had a fantastic day on our first trip to this side of the park.  As previously reported, the trail to Glacier Basin was in great shape. I even wore my Chacos to the snowline, which started around a half mile from the actual Basin. The parking lot had several cars, but was not too crowded considering how nice the weather was, and the fact that Sunday's forecast called for rain. There were several other skiers, mostly headed up Mount Ruth, and a handful of climbers making their way to Camp Schurman. 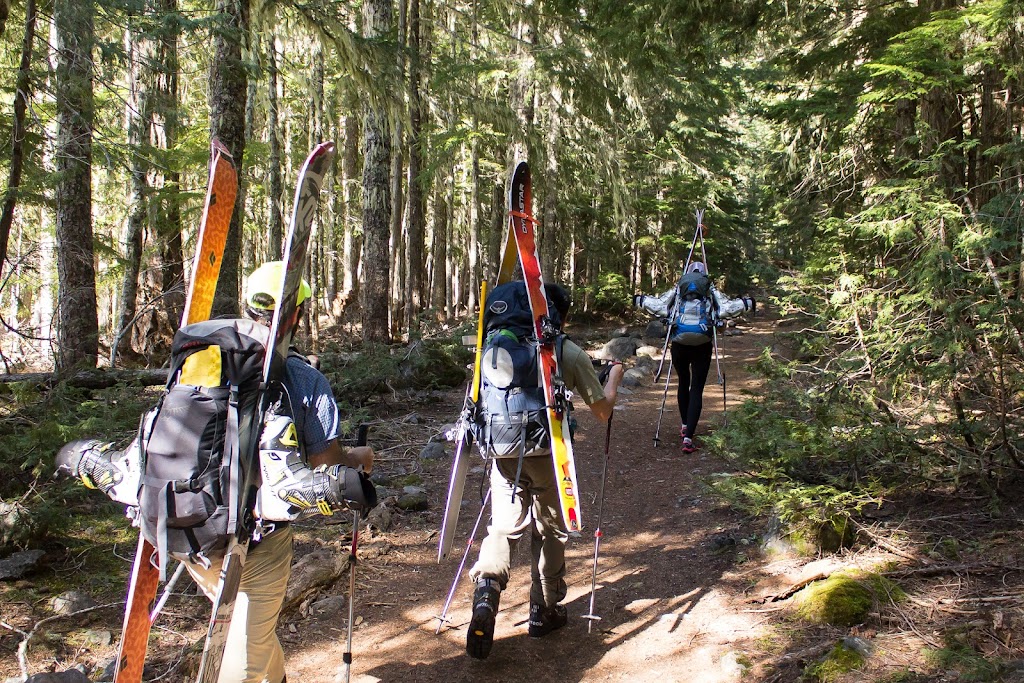 When heading up out of Glacier Basin, we stayed too far right, thus causing us to have to carry our skis on the trail that treks over the large dirt island.  This seemed to be the proper way, if we were wanting to head up to St. Elmo's Pass.  Avoiding this inconvenience would have been easy down low in the basin by simply staying left.  Fortunately, we only had to walk for a couple hundred yards before we could get back on the snow. 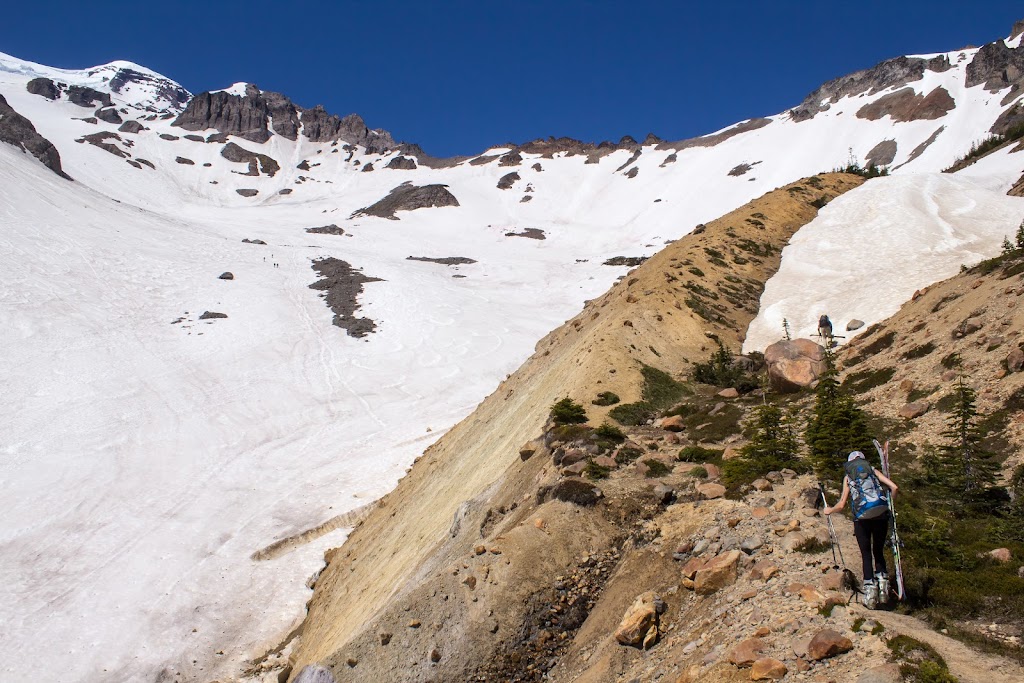 There was a well-established skin track right up the middle of the Interglacier. There were no signs of any recent snowfall from the precipitation that fell on Wednesday - Thursday of this past week.  The only major crevasse we encountered was at around 8300  towards climber's middle and left side of the Interglacier. 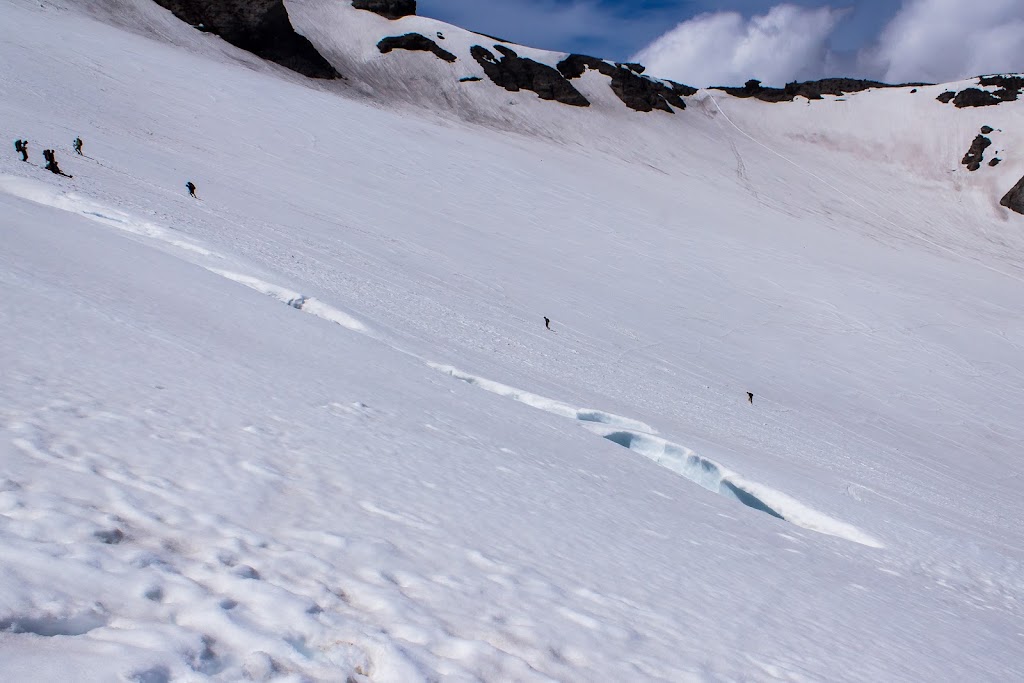 We moved at a leisurely pace, taking lots of photos, and made it to the top of the Steamboat Prow roughly 6 hours after leaving the car. 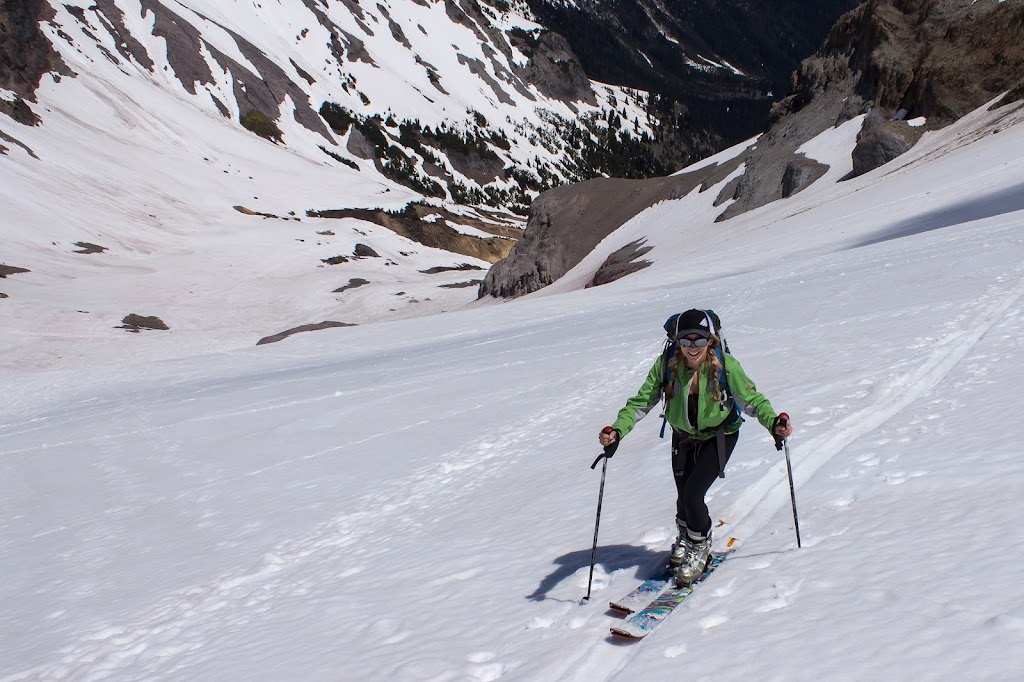 As was thoroughly documented last weekend, this weekend too had a few faint solar halos at times.  To be honest, I probably wouldn't have noticed the phenomenon, had I not read so much about it recently (thanks Amar!). 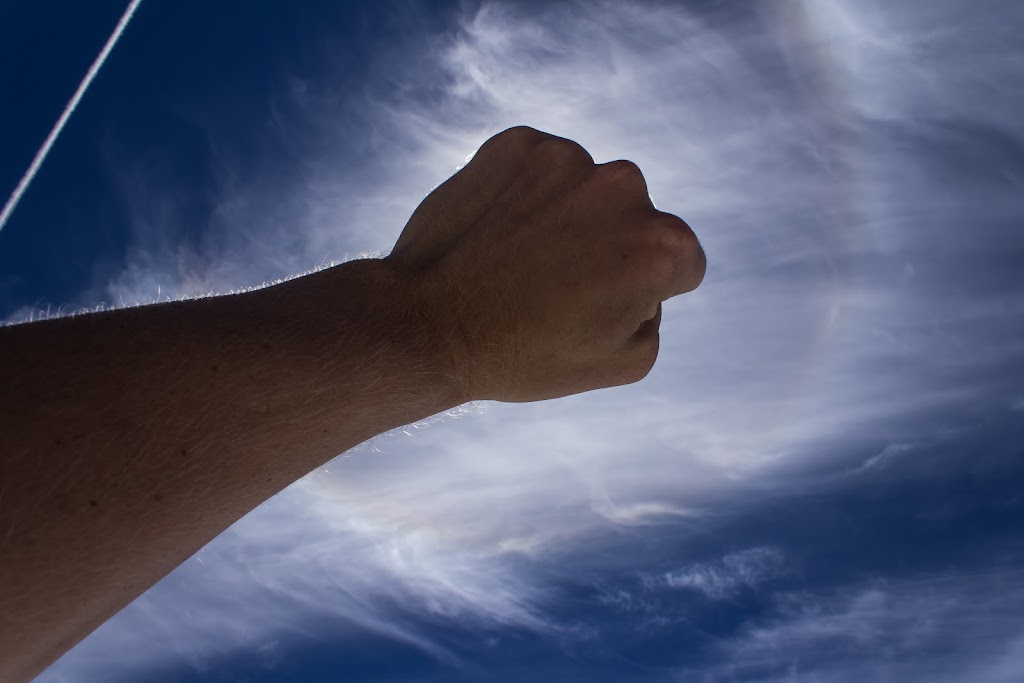 While we relaxed on our summit for the day, we witnessed a helicopter circling around Schurman, briefly touching down, then heading around towards Little T.  To our surprise, it then came back towards us, approached the top of the Prow, hovered in front of us at eye level for a few seconds, then promptly landed 100 feet from where we were standing!  (a short unedited video of the event, if you are interested: https://vimeo.com/68988779)

A guy in a jumpsuit got out of the helicopter and onto the Prow with us, and the chopper quickly departed.  It felt like an alien spaceship had just landed. When the visitor approached us, I wasn't sure if we were about to be abducted, or if we going to get a fine for mis-behavin in the national park.  All was well though¦he WAS a park ranger and just apologized for the intrusion.  He explained that a national inspector was evaluating the pilot flying the helicopter doing some basic maneuvers on the mountain.  We then asked the ranger why he didnt bring his skis up on such a nice day.  He quickly explained that he was only dropped off so that he could go clean the toilets at Schurman. I guess if you have to clean the toilets for your job, being flown up by helicopter isnt a bad way to get to work! 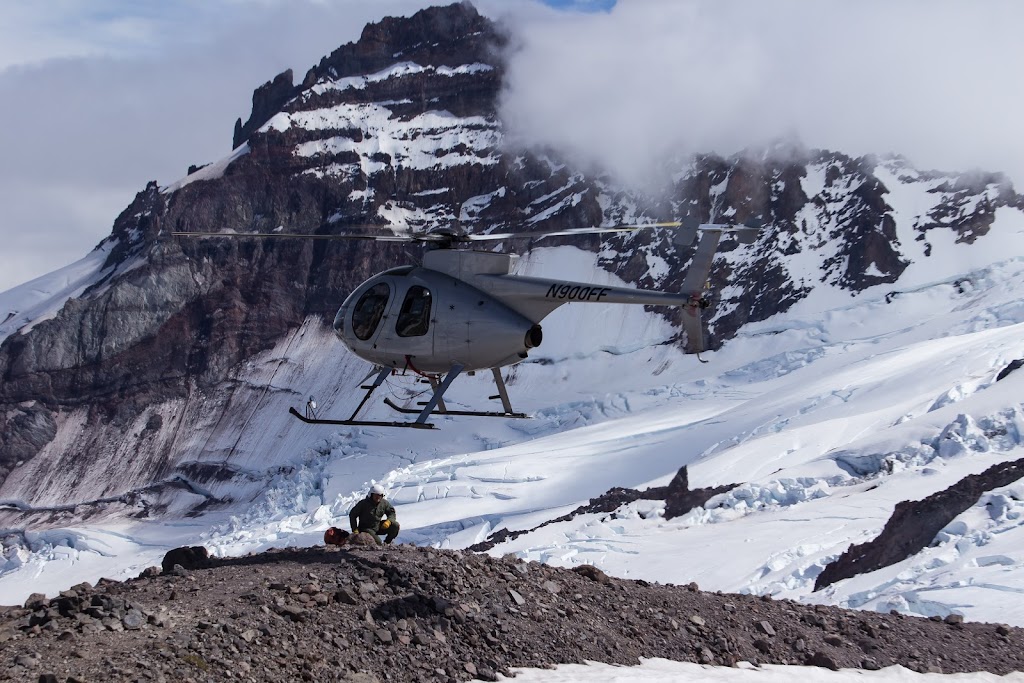 The skiing on our way back down was quite good for the most part. The top 1000 or so were fairly soft with occasional runnels, then the next 1500 smoothed out with really consistent buttery corn. 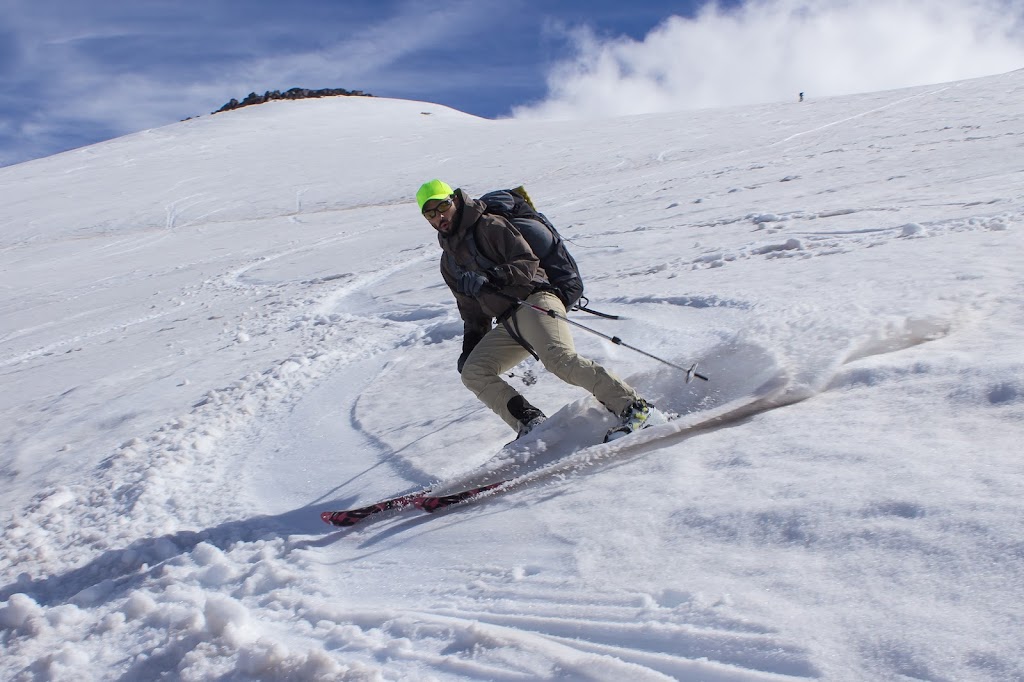 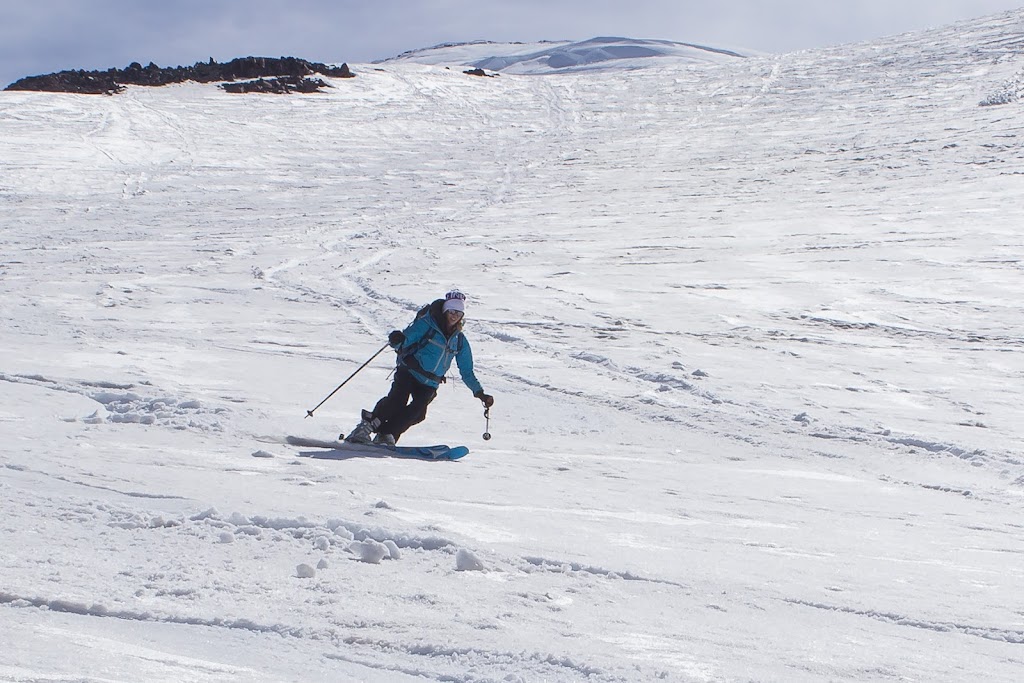 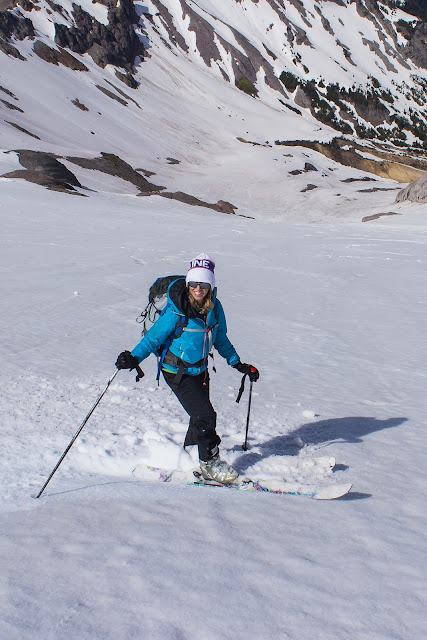 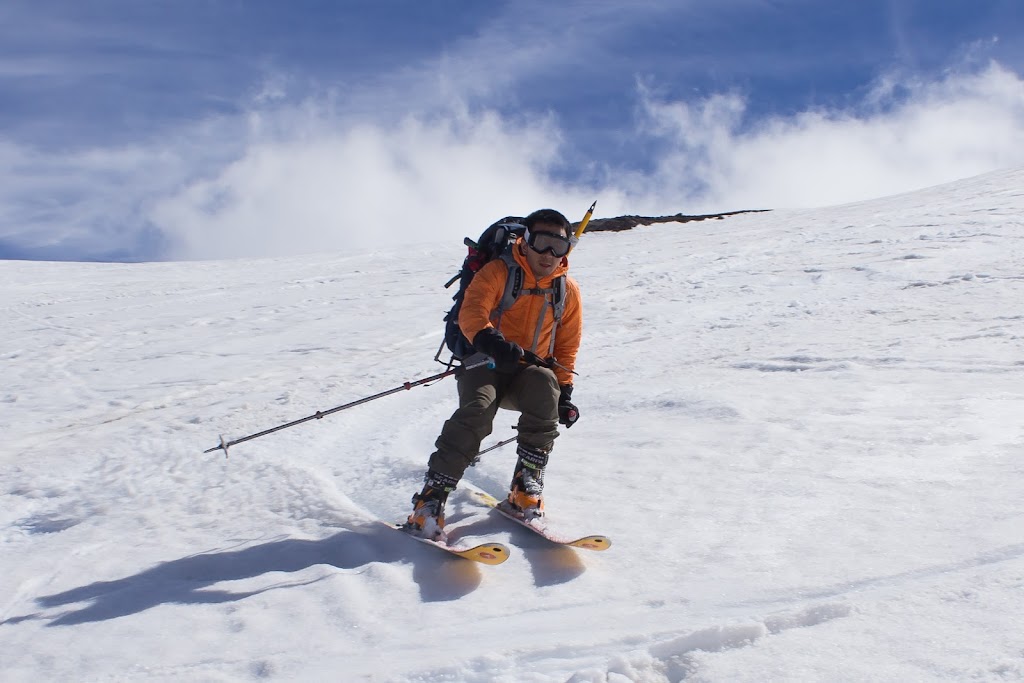 Lower down into the basin, things got sticky with more variability in the snow surface.  The most challenging snow feature was actually old downhill ski tracks that had become elevated with time relative to the surrounding untracked snow.  I had seen this phenomenon before, but usually only with uphill skin tracks.

The hike back to the cars was way more pleasant than we were expecting  with gorgeous late afternoon sun falling on Little T and Rainier. Yes, it would have been nice to ski all the way back to the cars, but we got to see a new place, and there were probably only a fraction of the crowds that we would have encountered at Paradise. 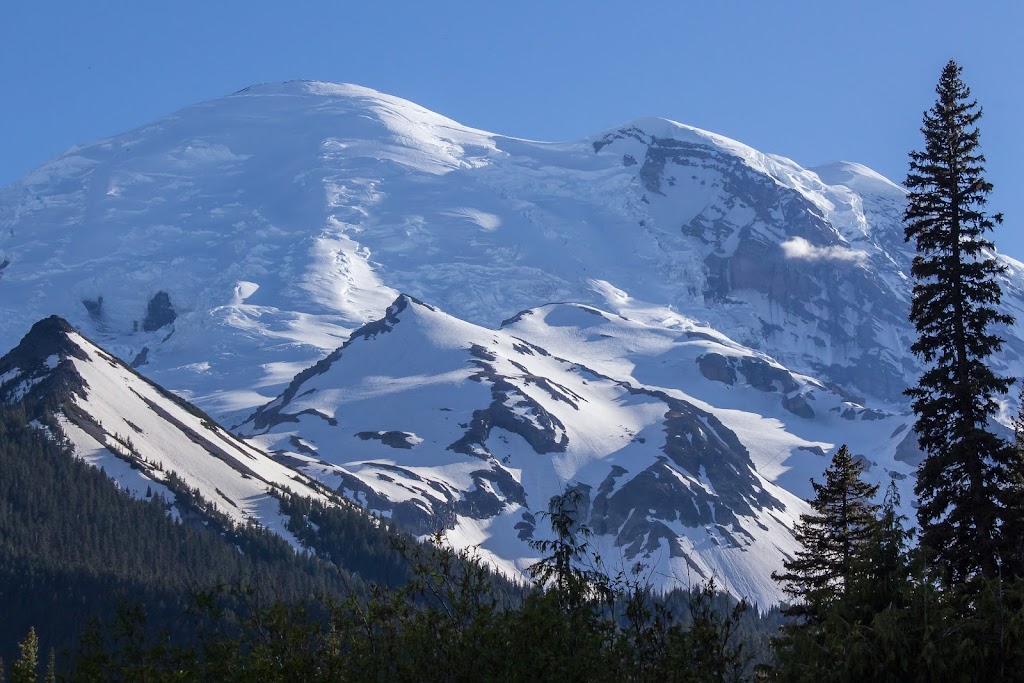 6/24/13 1:59am
zap
Great TR and the photos were well done.  Toilet worker delivery video. !  ;)
6/24/13 10:51am
shreddar
Great pictures! I was up there on Saturday also, but did not see your party (or the UFO).  What time where you at the Prow?  I was up there from about 1:30-2:00.
6/25/13 4:40am
jtmaier
Shreddar, I think we chatted for a while at the prow. And I think I see my party of two stopped for a water/sunblock break in the second picture! I was wondering what that chopper was up to. Kyle and I found a slightly less dubious connection to glacier basin. One of a handful of dirt/grass skinning moments before the basin. It was our first trip to this side of the mountain as well, and it turned into an awesome day for a ski!