How a SnoSK8 Can Help You Keep Your TAY Streak Intact

The history of skiing goes back over 8000 years. Early humans used skis to travel across snow. Thousands of years ago in Russia, Scandinavia, even cave paintings in China are depicting people using skis to travel. The legendary Norse god Ullr and his goddess wife Skadi were known for their hunting on skis – using just one ski pole so the other hand could hold a weapon. However, it wasn’t until the mid 1800’s that skiing started to develop as a recreational sport. Ski clubs started to become popular throughout the late 1800’s, and with the development of the train, the concept of ski resorts became popular in the late 1860’s.

It would not be possible to talk about the history of skateboarding without first mentioning surfing. Archaeologists in Peru uncovered evidence of pre-Inca cultures riding the waves as many as 3000-5000 years ago.While skateboarding does not have ancient gods and goddesses in its history – and of course has a historical dependency on the invention of the wheel – it does go back to the 1950’s when surfers attached wheels to their surfboards. 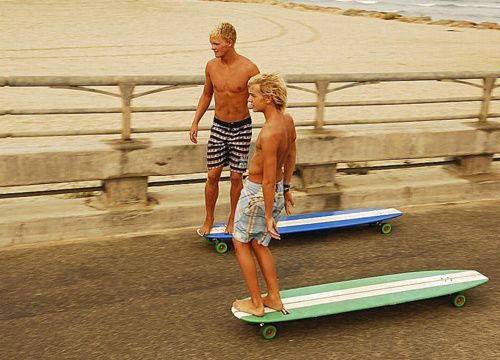 And it’s not a stretch to think that this concept would extend to snow. The Snow skate (or SnoSk8) can be traced to the Snurfer in the mid 1960’s. Sherman Poppen created the first Snurfer for his kids – and licensed the design to the Brunswick Corporation for sale as a sporting goods item. Figure 1 - Snurfer Patent Diagram 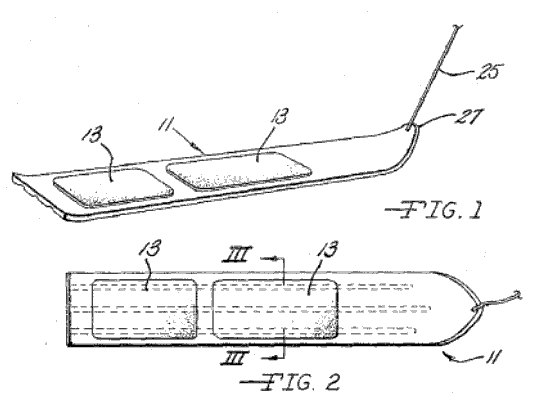 During this same time, a few products sprung up where people had attached skis to skateboards. The “Snow Skate”, “Skeeter” and “Snodad” were all brands of early snow skates.Through the late sixties and seventies, Snurfer competitions were growing. One of the competitive Snurfers was Jake Burton Carpenter – who developed the design into the snowboard.

Today, there are essentially 4 types of SnoSk8’s – single deck – ski is attached to the board directly, bideck – single ski on “trucks”, 4x4 – 4 skis on trucks, powderskate – longer and more stable for riding pow.

So, now that you’ve read this far, what’s this got to do with Turns All Year? One word – convenience! A snosk8 can be as little as 27” long and weigh between 5-10 pounds. Even a powderskate, with it’s more stable ride, can be less than 40” long. And while the lack of bindings offers a learning curve, it also means you can ride in hiking boots.So when you think of trying to get August turns (or October, which I’ve found to be the toughest), you can throw a snosk8 in a backpack and go on an 8-mile hike, find some snow, make your turns (watch out for snow bridges), and check off another month!

Looks fun and I use skateboarding for cross training for skiing.

Clever! How do you find that the snow skate handles the sun cups?